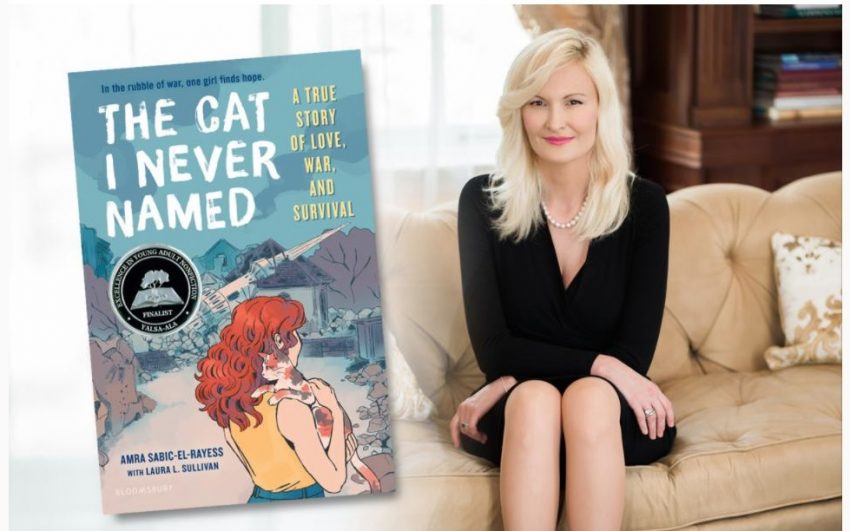 Amra Sabic-El-Rayess is the author of The Cat I Never Named: A True Story of Love, War, and Survival (Bloomsbury, 2020) and professor at Columbia University, Teachers College. Amra worked at Goldman Sachs from 2000 to 2002 in the firm’s Investment Banking Division in New York.

Tell us about your experience growing up in war-torn Bihac, Bosnia and Herzegovina and your journey to the U.S.
Amra: Prior to the war, I was a happy teen and math nerd who loved writing and trained as a spiker on a professional volleyball team. But by the early 1990s, I witnessed the rise of hate in the former Yugoslavia as the country’s most powerful state, Serbia, tried to turn Yugoslavia into Greater Serbia. Serbia’s nationalistic narrative eventually led to the breakup of the former Yugoslavia with Croatia, Slovenia and Bosnia and Herzegovina proclaiming independence. In response, Serbia invaded Slovenia followed by Croatia and then my own country, Bosnia and Herzegovina (Bosnia). The bloodshed in Bosnia was particularly gruesome because the intent was to eradicate Bosnian Muslims, and I was one of those Muslims.

At 16, in 1992, I suddenly found myself escaping constant bombing and starving under the Serb army’s military siege. My city of Bihac was besieged for nearly four years, longer than the infamous siege of Leningrad during WWII. We were cut off from any access to food, phones, electricity or the outside world. On a good day, a friend of a friend died. On a bad day, someone I loved was killed.

During the war, I worked with nurses and doctors to help care for children in our devastated city, and I became a teacher because many of our teachers were injured or killed. I never expected to survive the genocide and only hoped that I wouldn’t end up in a rape or concentration camp.

Through it all, I found solace in learning and ended up winning Bosnia’s national competitions in math and physics. As the war ended, in 1996, I immigrated to the United States with the help of several strangers. A year later, Brown University offered me a full scholarship, and in doing so changed my life.

You are currently an Associate Professor of Practice at Columbia’s Graduate School of Education. Can you explain how you got into academics and what your current curriculum and research is focused on?
Amra: While I was at Goldman, I would often finish my work at 2am, and instead of going home to sleep for a few hours I would stay up in the office to read about education, wars, hatred, discrimination and exclusion around the world. I loved the intellectual challenge of my work at Goldman, but at the time I didn’t see an avenue that would allow me to pursue my broader and varied interests.
So, I left Goldman to obtain several graduate degrees at Columbia, later becoming a professor and researcher. My work today centers on studying mechanisms and factors that trigger social disintegrations as well as on exploring the role of education during social transformations.

For instance, over the last several months, I have collaborated with the U.S. Department of Homeland Security’s Office for Prevention of Targeted Violence to address the rise of domestic radicalization, an issue I have previously studied abroad. Together with my graduate students, we recently piloted VOICES (Venture to Overcome Intolerance and Counter Extremism in Schools). VOICES is a first-of-its kind professional training program for educators in the United States that aims to build resilience to hate and prevent radicalization in our schools. We often hear of radicalization online, but before young individuals start exploring extremism on social media, their grievances are typically triggered by negative experiences in their schools and classrooms. So, VOICES provides teachers with tools to interrupt and prevent radicalization in our schools.

You previously worked as an expert on behalf of the U.S. State Department, foreign governments and other global organizations. What have you learned from your global presence and work with varying governments?
Amra: I have worked in various settings on anti-corruption, financial inclusion of women, education reforms, post war-development, radicalization, exclusion, empowerment and reintegration of former soldiers into civilian life. Though having years of experience has been helpful with each new initiative, we are prone to making mistakes when we come into a foreign context assuming that what has worked in the U.S. will inevitably work elsewhere. Instead, employing one’s knowledge and skills in a new environment while ensuring to account for various constraints and idiosyncrasies of that local environment is what produces sustainable solutions. In other words, some lessons are transferrable, but, prepackaged solutions rarely are, which is why my work is incredibly exciting. It demands that I think creatively about the next problem I am asked to solve.

What should readers anticipate in reading your critically acclaimed memoir, The Cat I Never Named?
Amra: The most frequent reflection of those who have read The Cat I Never Named and who reach out to me is that they are deeply moved by the story, often self-reflecting for weeks after reading my work. I receive touching emails daily from people who have binge read it and only wish that it was longer even though the book is nearly 400 pages long. I have to say that it is incredibly humbling to receive such an overwhelmingly positive reaction from people around the world.

I would also add that I have made myself vulnerable by sharing the story of my survival during the Bosnian Genocide, but in doing that, I have also humanized so many characters that readers meet along the way and fall in love with hoping that each and every one will make it alive through our ordeal. This book is also my love letter to education and to my family because of an immense amount of grit, determination, resilience, hope and love that is captured in our survival. One unexpected character that has stolen many readers’ hearts is Maci, a stray cat who adopts herself into our family at the onset of the war and ends up saving our lives. She symbolizes strangers, disempowered or other-ed people we might view as inconsequential, but who turn out to be change makers.

How is the book a timely warning for American readers and what lessons are there to be gained from your story?
Amra: The Cat I Never Named has so many cultural touchpoints with the issues of racism, discrimination, radicalization, othering, hate and violence that are on the rise in our country. I didn’t believe that the nationalistic narrative, which depicted me as a form of ethnic impurity to be executed, could ever be realized until it was, until I was living in a moment where my Serb neighbor had me placed on a list of Muslim girls to be raped. These experiences might seem so extreme and unthinkable to any rational mind, but my story is a warning and a reminder that they still happen and that these stories are not exclusive to any one nation or a group of people. We are all equally capable of hate, and that awareness is the first step in preventing it.

What takeaways from your time at Goldman Sachs have helped you succeed in your career?
Amra: Working for Goldman Sachs was a unique experience that allowed me to refine my skillsets – from being in constant communication with clients to producing stellar work under intense pressure. Nothing was impossible at Goldman and merit and hard work were the key precursors to success. I also worked with some of the most extraordinary and brilliant people while at Goldman including my husband, Tamer El-Rayess. We have two brilliant daughters, Jannah and Dinah, and both of us have charted our own paths to success, but we have learned the value of partnership and teamwork while at Goldman.