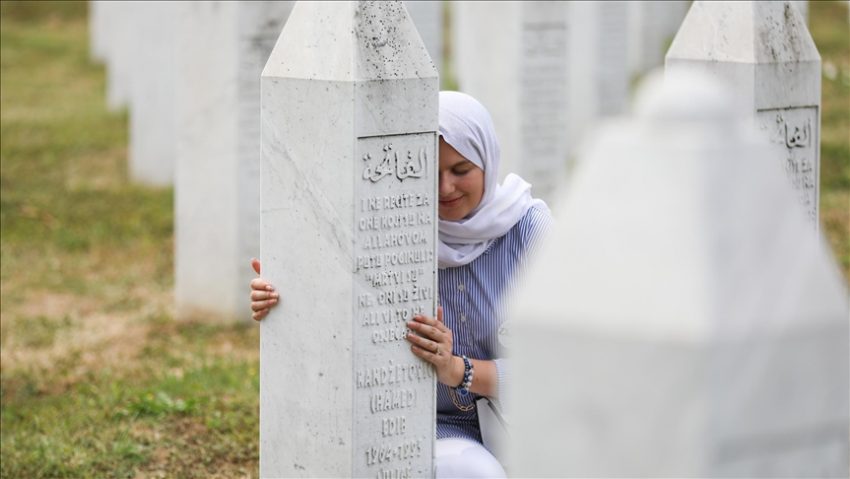 In Bosnia and beyond, 11 July has become synonymous with Srebrenica.

What followed were mass executions of Bosniak men and boys, rapes of Bosniak women and deportations.

The atrocities committed in and around Srebrenica were the most brutal phase of the three-and-a-half-year genocide that Bosnian Serb forces perpetrated against Bosniak Muslims from 1992 to 1995.

Every year on 11 July, Bosniaks commemorate the genocide victims of Srebrenica.

Domestic and international dignitaries pay their respects and promise that Srebrenica will never happen again. Remains of victims found in mass graves are buried in the Srebrenica Memorial Cemetery.

On this July 11, remains of nineteen genocide victims were laid to rest.

With Mladic’s final guilty verdict last month, the top leadership of the Bosnian Serb rebels of the early 1990s has now been found guilty of genocide, crimes against humanity, and war crimes without exception.

Despite overwhelming evidence of genocide, international court verdicts, and historical studies by international scholars, the political elite of Republika Srpska, including the supposedly moderate opposition, all engage in genocide denial and even genocide glorification.

Countering the growing genocide denial is the task of Bosnian and international scholars, activists and politicians.

International commemoration has taken different forms over the past two decades.

Particularly important are legislative resolutions, declarations of 11 July as Srebrenica Remembrance Day in countries across the globe and 11 July commemorative events.

A number of parliaments have adopted resolutions commemorating Srebrenica.

In the United States, both the Senate and the House adopted landmark resolutions in 2005, which placed both chambers on the record as reaffirming the genocide in Bosnia. The European Parliament adopted Srebrenica resolutions in 2005 and in 2009.

Several national parliaments including those in Croatia, Montenegro, Canada, Australia and Kosovo have adopted resolutions on Srebrenica.

While this is significant, it is very critical that this trend continues and legislative resolutions are adopted in the parliaments of great and regional powers, as well as all NATO and European Union member states.

In addition to adopting legislative resolutions, it is also important that 11 July be declared as Srebrenica Remembrance Day in countries outside the Balkans.

Several American states and cities with significant Bosnian-American populations have done this.

By issuing such declarations, these states and cities have kept alive the memory of the genocide far beyond the borders of Bosnia.

As the American example demonstrates, national legislatures can make such decisions, but so can other levels of government, such as states, cities, and towns.

In other words, city councils and mayors in friendly countries, as well as those with a significant Bosnian population, do not need to wait for national legislatures to designate 11 July as Srebrenica Remembrance Day.

A number of cities and towns outside Bosnia have held commemorative events to mark the 11 July over the past years.

These cities and towns in the US and western Europe usually have a significant Bosnian diaspora.

Cities in Turkey have also held commemorations remembering Srebrenica. This is a very positive development and efforts should be made to extend this to other cities and towns.

Adopting resolutions in national parliaments, declaring 11 July as Srebrenica Remembrance Day, and holding annual 11 July events to commemorate the genocide in Bosnia should be undertaken by major and regional powers, as well as all NATO and European Union member states.

These commemorative practices will keep alive the memory of the genocide while serving to minimize the influence of genocide deniers.