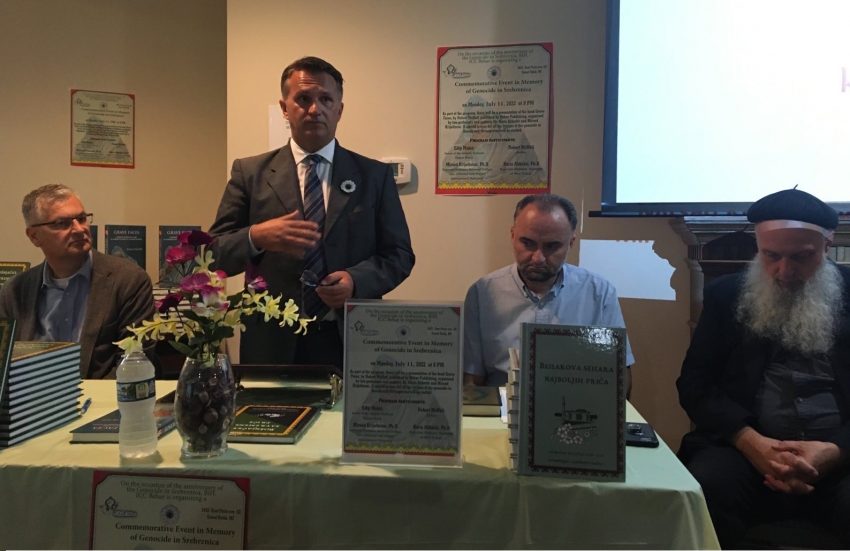 ICC Behar Hosted the 27th Anniversary of Genocide against Bosniaks in Srebrenica: Special Tribute by The Governor of Michigan and Book on genocide presentation

On July 11, 2022, ICC Behar hosted an event to commemorate the 27th anniversary of the genocide committed against Bosniaks in Srebrenica. Participants included Imam Edip Makić, Mr. Robert McNeil, author of the book Grave Faces: A Forensic Technician’s Story of Gathering Evidence of Genocide in Bosnia, Mayor of the City of Kentwood, Mr. Stephen Kepley, Mr. Philip Skaggs, candidate for the House of Representatives in the State of Michigan, Dr. Mirsad Krijestorac, political science professor at the Broward College and FIU, and Dr. Haris Alibašić, associate professor at the University of West Florida.

LET IT BE KNOWN, That it is with deep respect for the community and its people that we honor the lives lost during the Srebrenica genocide. This day, July 11, 2022, we acknowledge the 27th anniversary of the Srebrenica genocide and remember the tragic suffering of the Bosniak people from 1992 to 1995. As the Bosniak community in Michigan honors this day, we offer our sentiments of sorrow and remembrance.

Between 1992 to 1995, over 100,000 civilians died as a result of the policies of ethnic cleansing and aggression in Bosnia and Herzegovina. During what became known as the Srebrenica genocide, Serbian forces perpetrated violence in Srebrenica and all of Bosnia. On July 11, 1995, 8,372 innocent Bosniak civilians were summarily executed, and over 30,000 were expelled from their homes during the worst atrocity in Europe since the Holocaust. On July 11, 2022, the anniversary of this tragic event, we raise awareness of the suffering that occurred on this day 27 years ago and honor all those whose lives were impacted.

IN SPECIAL TRIBUTE, Therefore, this document is signed and dedicated to the Bosniak community in Michigan on Srebrenica Remembrance Day. May we use the memory of those who lost their lives during the Srebrenica genocide to work toward promoting peace among all peoples in Michigan and worldwide.

The One Hundred and First Legislature at Lansing, July 11, 2022

After the tribute was read, the program continued. In his address, Mr. McNeil spoke about his book Grave Faces and his experiences as a forensic technician, gathering evidence of war crimes, crimes against humanity, and genocide in Bosnia and Kosovo, from 1996 to 2002, during the most extensive international forensic investigation in history conducted by the United Nations. ‘Grave Faces’ is unique in that it’s the first book written by an experienced technician involved in what has emerged as the most extensive forensic investigation in history. The book is his attempt to confront the genocide denial by showing how thorough and detailed the investigation was, conducted by experts from 32 countries who provided scientific evidence for the court to rule twice on the Srebrenica Genocide and other crimes against humanity. In it, the author asks universal questions of humanity about good and evil, trying to understand the level of cruelty and barbarity perpetrated against so many innocent civilian men, women, and children in a war of aggression against Bosnia and Herzegovina and Kosovo. The book can be purchased through the Behar Publishing website at: https://www.beharpublishing.com/book/grave-faces-a-forensic-technicians-story-of-gathering-evidence-of-genocide-in-bosnia/.

Dr. Alibašić praised the work of Behar Publishing and ICC Behar in ensuring the memories and history of genocide in Bosnia and Herzegovina are recorded for future generations. Reporting historical facts about genocide is especially important in the context of the constant genocide and Holocaust denial in modern days, as the last stage of genocide is often amplified through social media.

Dr. Krijestorac spoke about the relevance of the Srebrenica genocide from legal and policy perspectives and the historical significance of the International Criminal Tribunal for the former Yugoslavia verdict on the genocides committed against Bosniaks in Srebrenica. Dr. Krijestorac emphasized that the UN Security Council established the Tribunal, and its rulings were therefore recognized by all its members, including China, Russia, the USA, and others, which had not happened since WWII. 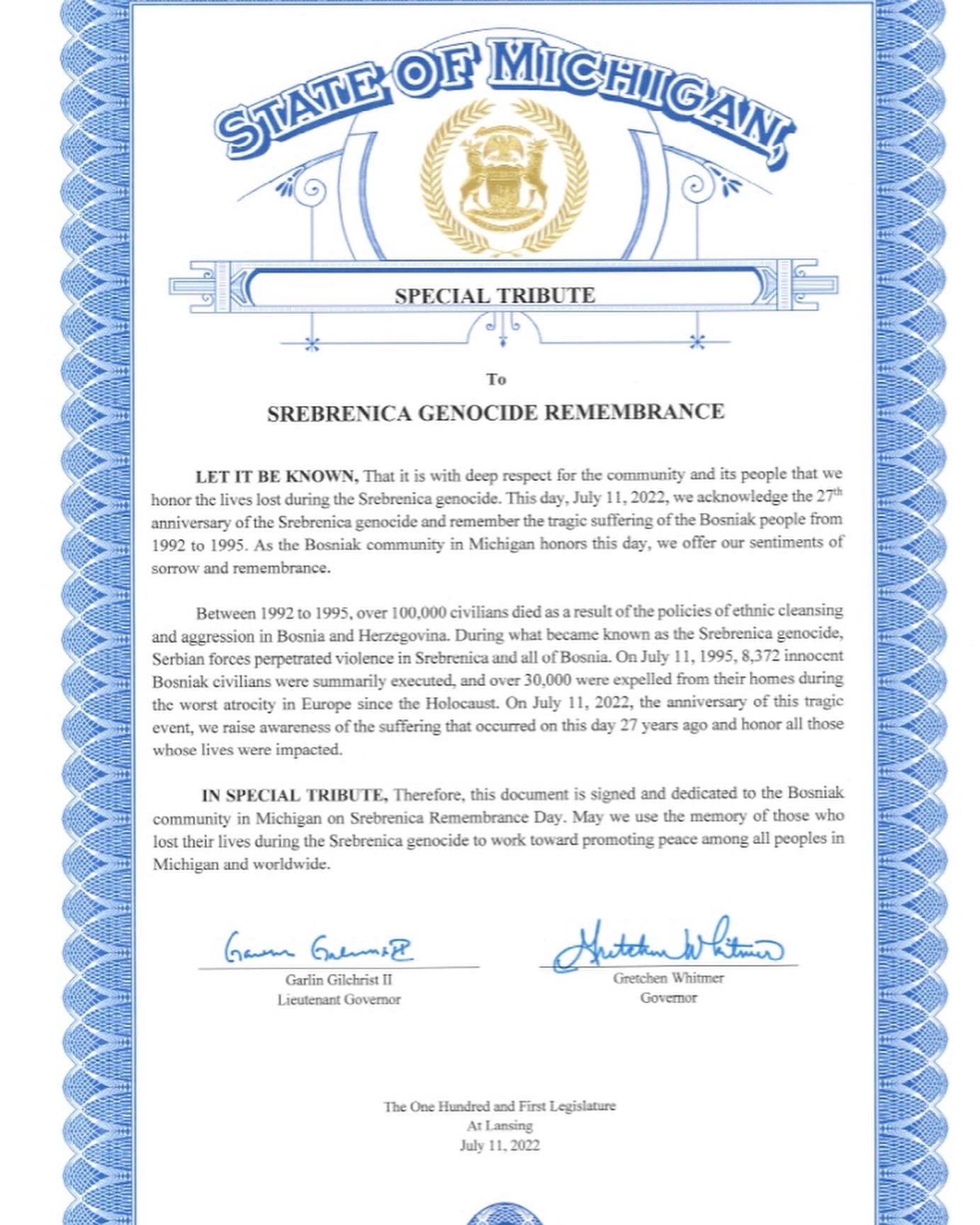 Mayor Kepley expressed his sympathy for the victims and their families. Also, he spoke of the Bosniak community in the area and the many contributions Bosniaks make in the communities they live. He was presented with the Behar Publishing books, as a gift for Mayor’s office.

As a member of the community, Mrs. Nihada Rahmic, who survived Srebrenica Genocide, spoke briefly of her experience as a ten-year child living through the hell of Serbian attacks and killings in Srebrenica with her mother and sister and losing close family members. Mrs. Rahmic expressed her appreciation for the events like the one held at ICC Behar sot that we never forget those who lost their lives in genocide.

To conclude the event, Imam Makić recited prayers and duas for lasting peace in the region and for justice for all the victims of the Srebrenica Genocide.