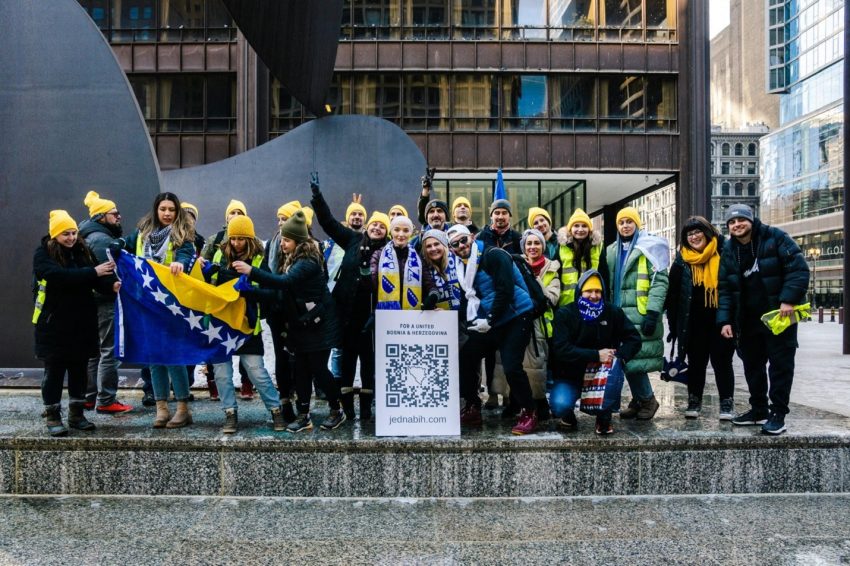 On the occasion of March 1 – Independence Day of Bosnia and Herzegovina, Jay Robert “J.B.” Pritzker, the governor of the US state of Illinois, issued a proclamation.
In the proclamation, Governor Pritzcker states that the Bosnian community has made great contributions in science, technology, architectural medicine and sports since the 19th century when the first Bosniaks came to American soil. The Bosnian community has made a major contribution to multiculturalism, religious tolerance and democracy in the state of Illinois.
In addition to thousands of victims of war and genocide, they made a great contribution to the state of Illinois and on the day Bosnians declared their independence, we as citizens of Illinois announce that March 1 – Independence Day for BiH, and declare it as the American American Day of Illinois 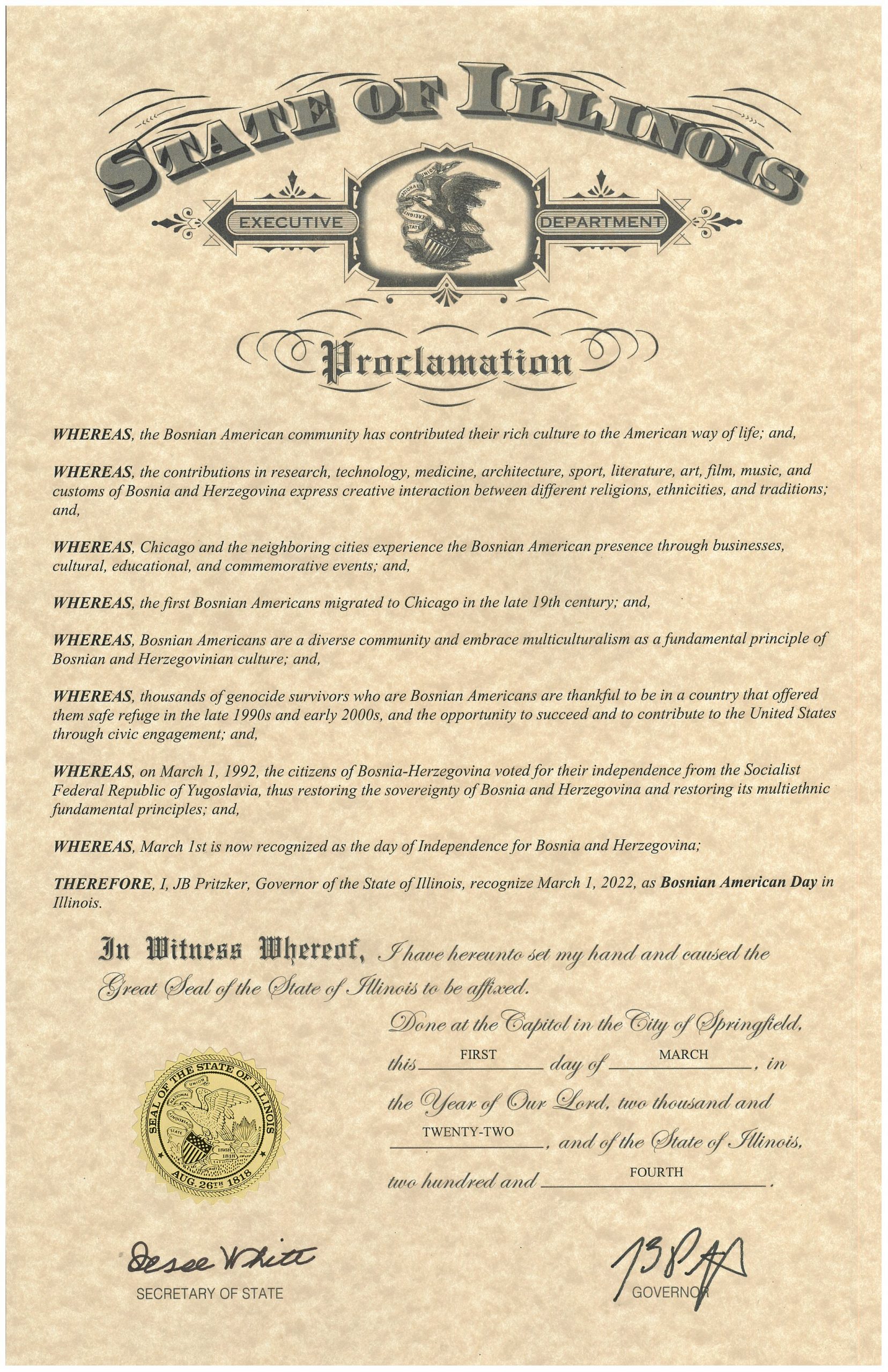 On Saturday, February 26, an estimated 1,500 members of the Bosnian and Herzegovinian (BiH) diaspora and allies gathered to recognize the 30th anniversary of BiH’s independence at Daley Plaza. The #ForAUnitedBiH march called attention to the escalating political situation and threats of violence and secession in BiH. Attendees voiced their support for a united, multi-ethnic BiH, chanting against war and ethno-nationalism. The day also marked the first time Bosnia and Herzegovina’s yellow and blue flag was raised in the city’s history. The march #ForAUnitedBiH was a coordinated multi-city effort; marches took place on the same day in Atlanta, Washington D.C., and San Jose. 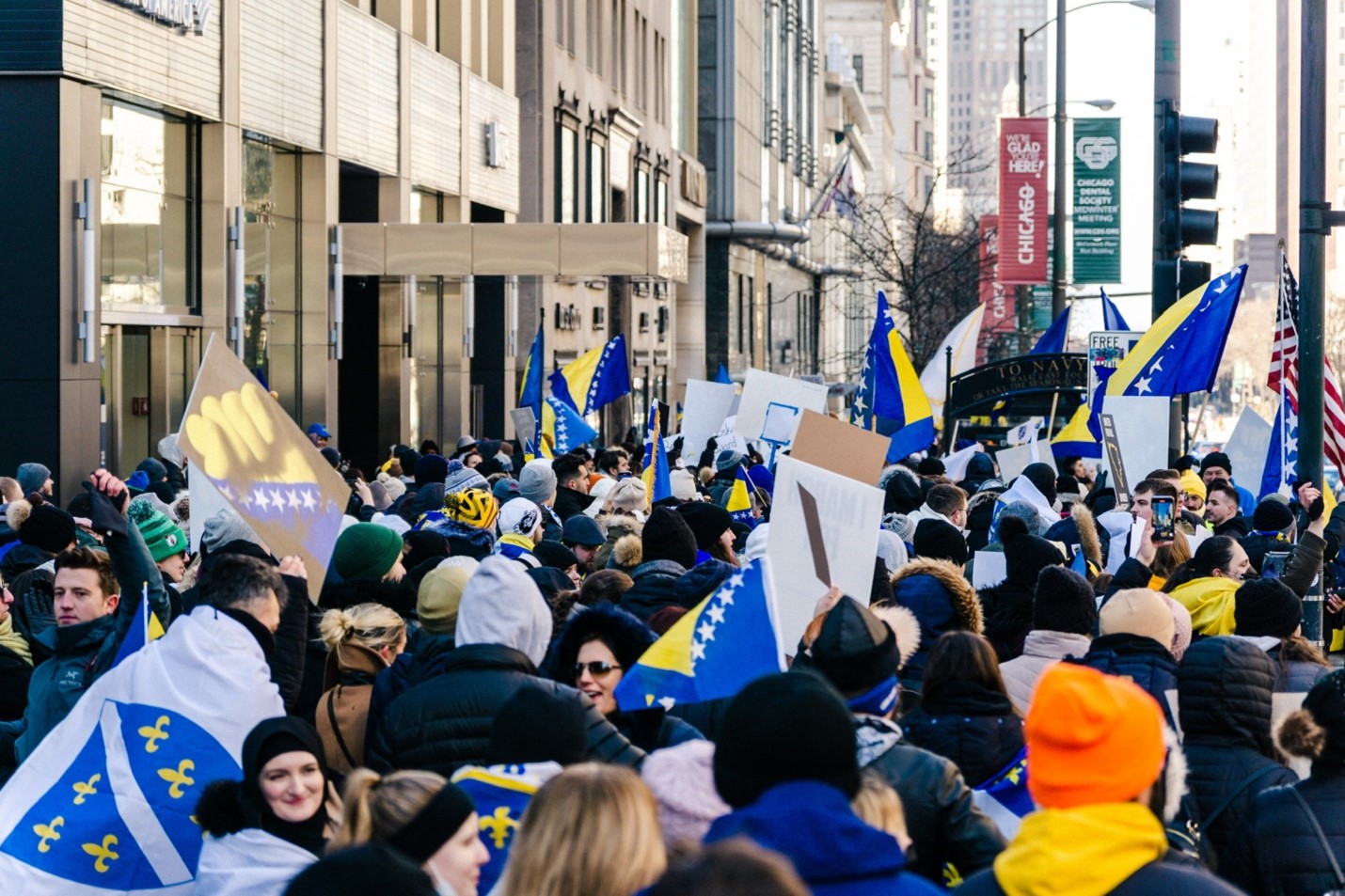 “It was incredible to see the Bosnian diaspora mobilize and show up in these numbers,” said Ida Sefer, president of the Bosnian American Genocide Institute and one of many coordinators of Act for BiH/ JednaBiH, a coalition of organizations and individual members that organized the march. “To see so many people of all ages gathered together for a common cause was truly awe-inspiring. We made history with the flag-raising and we hope this is just the start of a much broader movement, both here and within Bosnia itself.” 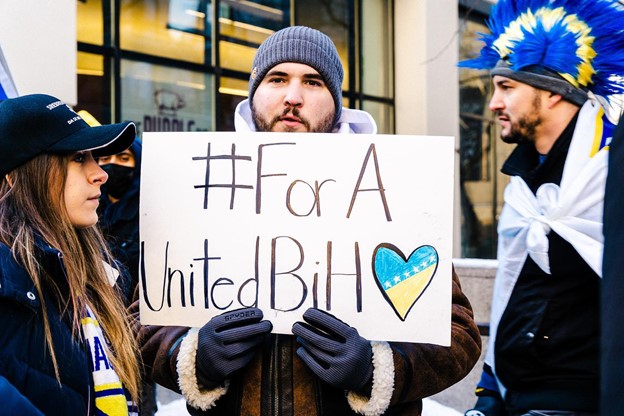 In Chicago, a letter of support from Senator Dick Durbin was read and attendees heard from genocide survivors, including activist Senada Cvrk Pargan, and members of the Bosnian diaspora: Ehlimana Gutosic, Vahidin Kuric, Ermina Veljacic, Adelisa Turnadzic, Aida Mackic and Haris Dzubur. Also in attendance was Pavlo Bandriwsky of the Illinois division of the Ukrainian Congress Committee of America, who spoke in support of the march and expressed solidarity between Bosnians and Ukrainian people in light of Russia’s illegal attack on the country, and the devastation of the genocide which occurred in BiH.;

“What’s happening in Ukraine is eerily similar to the aggression that took place in Bosnia less than 30 years ago,” said one of the march organizers Admir Mehanovic. “It’s important people know we do not support any political party or particular agendas. We march for a multi-ethnic and prosperous BiH and now is the time to prevent further harm by mobilizing and calling on our elected representatives nationwide to act.” 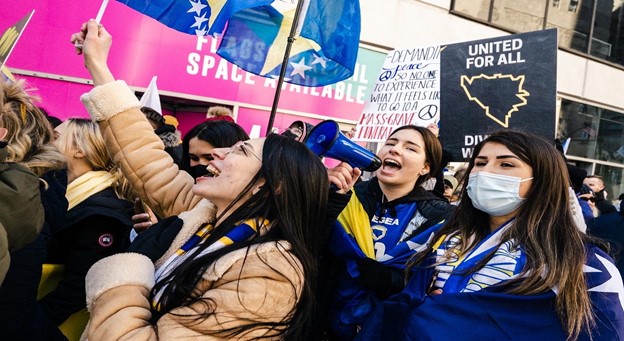 Organizers aimed to raise awareness for the following: 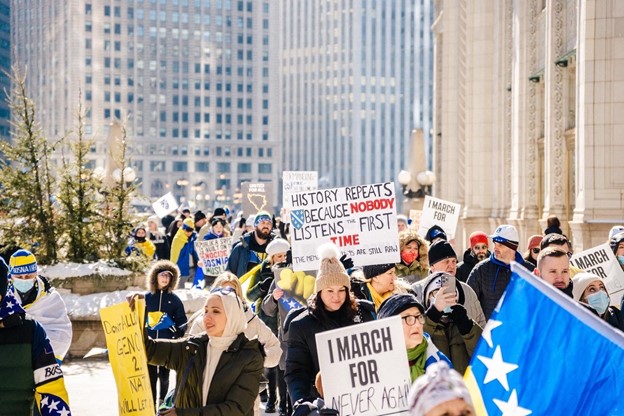 Asja Omeralovic, an organizer of the Chicago march and rally, reflected on the broader importance of the march’s message. “Out of all the posters and messages that were relayed that day, the one that stuck out the most to me was ‘If the heart of Europe breaks, the entire world will shake’,” said Omeralovic. “It really brought home and epitomized the importance of the geo-political challenges that we are facing in Bosnia and Herzegovina, and by extension in Ukraine. It’s time to wake up from hibernation, ignorance or negligence is no longer an option.” 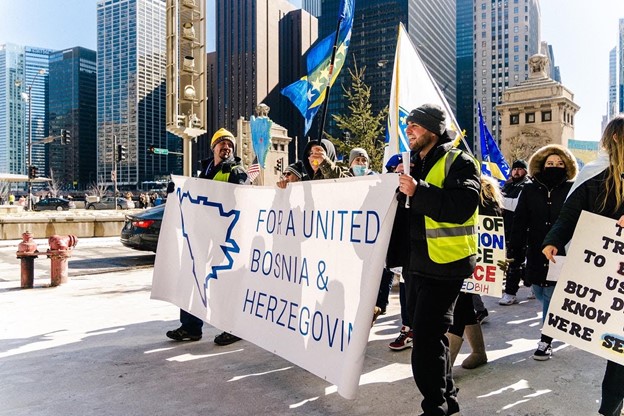