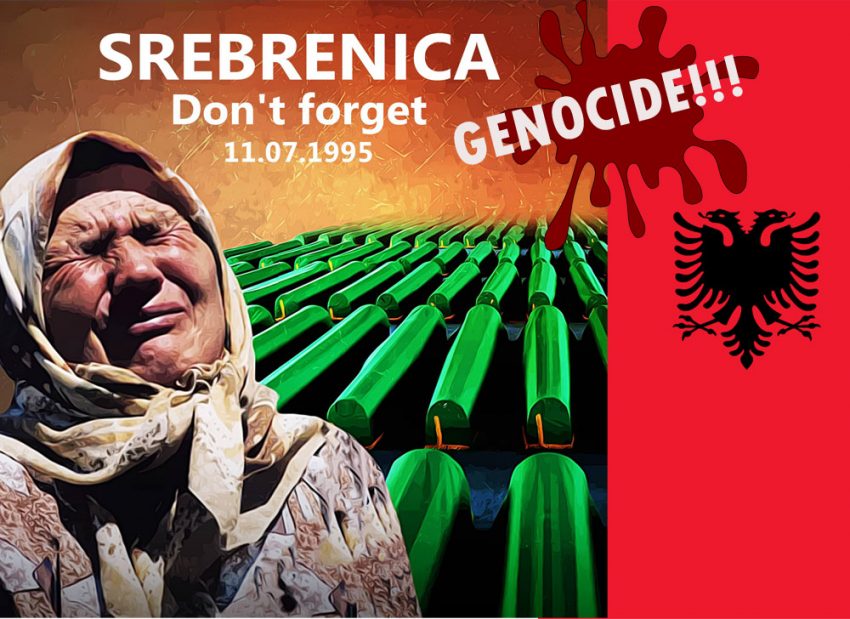 – Ilir Meta,
President of the Republic of Albania

Edi Rama,
Prime Minister of the Republic of Albania

– Lindita Nikolla,
President of the Assembly of the Republic of Albania

Subject: Protest letter on the shameful and anti-civilization act of rejecting the resolution on “Recognition of the genocide in Srebrenica, Bosnia and Herzegovina” by the majority of members of the Assembly of the Republic of Albania

Dear leadership of the Republic of Albania,

The Bosniak-American National Association (BANA) and the Institute for Genocide Research – Canada (IGK) are sending you a protest letter regarding the shameful and anti-civilization act of rejecting the resolution on “Recognition of Genocide in Srebrenica, Bosnia and Herzegovina” by most members of the Albanian Parliament.

We, members of BANA and IGK, originally from Bosnia, Kosovo, Sandzak, Serbia, Montenegro, Macedonia and Albania, who have suffered in the past and passed through military and police anti-Bosniak and anti-Albanian regimes, and who have survived the Serbian-Montenegrin and Croatian aggression, joint criminal enterprise and genocide of the 1990s, we are deeply hurt by the voting process in the highest state body – the Albanian Parliament, that there is so much misunderstanding, insensitivity and political arrogance towards evil, genocide against innocent Bosniak children, youth, civilians in general Srebrenica, Podrinje, Bosnia and Herzegovina.

The entire democratic world is appalled by the Serb genocide committed against Bosniaks in Srebrenica in July 1995, in the “UN Protected Area”. We emphasize that the highest international courts of the United Nations, the International Court of Justice and the Hague Tribunal have ruled, clearly and unequivocally, that the genocide against Bosniaks was well planned by the political and military leadership, which ordered and committed military and police formations of the parastate of the Republika Srpska, within the internationally recognized and sovereign state of Bosnia and Herzegovina.

The Republic of Serbia is the first country in the world to be punished for not preventing the genocide against Bosniaks in Srebrenica. The entire Bosnian Serb political and military leadership was also sentenced to life in prison and decades in prison, led by top-notch war criminals Radovan Karadžic and Ratko Mladić.

Also, the United Nations has acknowledged that the Srebrenica genocide is their biggest mistake since its inception. The United States Congress and the Parliament of Canada adopted resolutions in which they clearly condemned the Serbian genocide against Bosniaks in Srebrenica. Additionally, in 2009, the European Parliament adopted a resolution on Srebrenica condemning the genocide of Bosniaks, followed by the adoption of a resolution by a number of European, and even Balkan states.

Unfortunately, the parliamentarians of Albania, led by Prime Minister Edi Rama, i.e. the parliamentary majority, that is the deputies of the socialist party of Albania, voted against the resolution on “Recognition of the Genocide in Srebrenica, Bosnia and Herzegovina”.

With this act, they brutally hit the truth, justice and all victims of genocide in Srebrenica and Bosnia and Herzegovina, while you consciously sided with the hardened Serb war criminals and planetary crimes they committed against Bosniaks.

The Bosniak-American National Association and the Genocide Research Institute of Canada, in addition to condemning such a shameful act, and out of respect for the victims of genocide, respect for the state of Bosnia and Herzegovina, and Albanian and Bosniak friendly ties, we invite you to correct your great human, moral, political and state mistake; to publicly apologize and ask forgiveness from the mothers of Srebrenica whose minor children were separated from them, after brutal mass rapes, abuse, in columns were slaughtered and killed before the eyes of the whole world.

After voting on the resolution on the Serbian genocide against Bosniaks in Srebrenica, we invite the President, the Prime Minister and the entire Albanian Parliament, headed by the President, to visit the Memorial Center for the Victims of the Potocari – Srebrenica Genocide. Here you will meet some of the victims of genocide, with targets of 6,671 victims who were identified and given a grave, name and target. That is not the final number. The remains of genocide victims, who were dismembered by Serb criminals on the orders of the authorities in Belgrade and Banja Luka, dug up by excavators and hidden on Bosnian cliffs, are still being searched for. So the remains of one victim were found in five or more mass graves, which speaks of the intention of the Greater Serbia criminal regime to try to conceal evidence, and it still applies today.

We note that 250 victims were buried in local cemeteries by the decision of the surviving family members.

The Bosniak-Albanian friendship is so strong that such immature and undemocratic actions of the MPs can only strengthen it. That is why we invite you to speak and vote about the victims of the Serbian genocide against Bosniaks as the people think, and not for the sake of political proclamations and successors of the Balkan butcher Milošević, like Aleksandar Vučić, who forged the criminal craft with war criminal Vojislav Šešelj, all in order to divert attention from the responsibility of Serbia, which after all the war evils of the ’90s, is now a haven for the most hardened war criminals, and criminals, and who incite Bosnian Serbs to separatism and the disappearance of Bosnia and Herzegovina.

We are waiting for you to inform us about the procedure of the voted resolution in the Assembly of the Republic of Albania, and for you to unequivocally stand by Bosnia and Herzegovina.

So God help you!