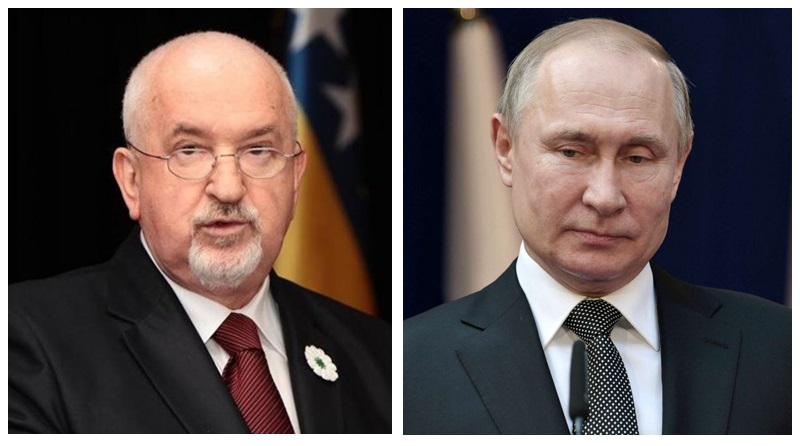 I am not entirely sure if it makes sense for me to write you an open letter. It seems that there is nothing that connects us in kinship, neighborhood or rank. You are far from my Bosnian house, but you are somehow involved in my Bosnian life. You have long alternately held the highest political and state functions of the Russian Federation while I had held the highest spiritual office for twenty years in war and peace as the Grand Mufti of Bosnia.  Politics and religion are formally separated, but they have one common point of meeting – the human life on which neither politics nor religion has a total monopoly.

Mr. President, we have never had a direct meeting, but I did watch you up close in Moscow at an international conference on religious dialogue organized by the Russian Patriarch Alexei II before his death in 2008.

The second time I visited in Moscow was in June 2011 for a meeting of the European Council of Religious Leaders, held under the auspices of Patriarch Kirill of Moscow and All Russia. I was well received at the hotel of the Moscow Patriarchate. During my stay there, I smelled strongly of incense. I was privileged to attend the morning liturgy at a nearby church. I listened carefully to the liturgical melody in Russian, which was not foreign to me because it had a Slavic sound and an Eastern echo. Old women in black dresses with a black veil on their heads, like the hijabs, devoutly sang a liturgical song in the choir. My presence did not distract them at all because the look of my face made them feel like I was one of them. It was only when they noticed that I was not participating in the liturgical prayer that they became somewhat apprehensive. This second visit to Moscow remains a sad one, however, because on that occasion I received the sad news that my mother had passed away in the mercy od God Almighty.

My third visit to Moscow was in March 2019 within the framework of the international religious conference under the title:  Islam is a Message of Mercy and Peace held in Moscow and Grozny and organized by the World Muslim League – Rabita. In conversation with Muslims in Chechnya, I had not heard a single unkind word about you.

Mr. President Putin, this information about my visits to Moscow may not be important to you, but it is important for me to tell you that I felt comfortable as a guest in Russia, especially among the Muslims in Chechnya, who praised you more than I expected. Of course, I was glad to hear that from them after everything they went through in Chechnya in the wake of the collapse of the Soviet Union. We in Bosnia know very well what that means.

Until then, Mr. President, accept the expressions of my respect in the hope that you will understand my message as I wish that Dodik will happen neither to us nor to you once again.

Dodik has embarrassed not only the Serbian people and the Bosnian state as Chairman of the Presidency, but also your Foreign Minister Sergei Lavrov, who, because of him, disgraced the Russian protocol and diplomacy in front of the whole world. May this shame never happen again, especially in Bosnia!

May I say, Mr. President, that Bosnia & the Bosnian folk have great respect for Russia and Russian peoples, their historic traditions of honesty and high ethical standards, the land of Tolstoy and Dostoyevsky.

I hope, Mr. President, you do have great respect for the autonomy and agency of Bosnia as an independent and sovereign Slavic State in the heart of Europe as well.

Please, Excellency, accept  the assurances of my highest consideration.