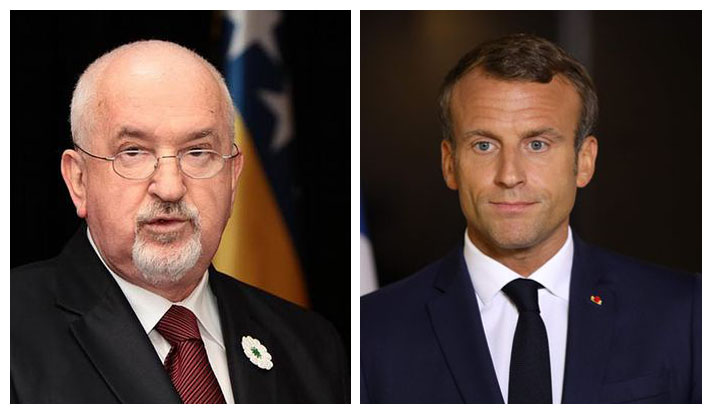 It is out of respect toward the French nation that I address you, with expressions of esteem, as a symbol of the French Republic. Otherwise, you do not deserve respect since you either consciously or unconsciously herald the end of the era of the universal values:

discrimination, fratricide – slavery, discrimination and fratricide. It is still not too late to seriously consider and realize that it is not the step forward into the future in Europe but rather a step backward into the past, just as it is for the whole world.

As the descendants of the “Good Bosnians” – “Bono Homini”, we in Bosnia have the knowledge and the remembrance of the Cathar Crusade, or the Albigensian Crusade of 1209-1229. The Bosnian Christians had a connection to the Cathar Religion. They also knew where the French village Montaillou was, of which the French historian Emmanuel Le Roy Ladurie wrote the book “The Promised Land of Error” in 1978. We remember the words: “Kill them all, God will recognize his own”. We remember the “Bartholomew Night”, or the “Bloody Parisian Ball” of 1572. We thought that the path of return to those times was closed. However, ever since the Serbian genocide, we Muslim Bosniaks in Bosnia are careful and sensitive to every sound, every sign, every word which smells of the Albigensian Crusade and the “Bartholomew Night”. Even more so, when it comes from you as the French President of whom we thought that he had inherited the glorious values of the French Revolution, which revolution motivated the whole world to embark upon the path of humanism, renaissance, education, democracy and human rights, based upon the principles of freedom, equality and brotherhood –  (liberté, égalité, fraternité).

Regrettably, dear President Macron, we have been disappointed in you. Is there a need to constantly repeat that we, as Muslims, unequivocally condemn the killing of Mr. Samuel Paty, the French professor of history, as well as the killings of the three persons at the Notre Dame church in Nice? Those acts were depicted as “Islamic terrorism”. That is the easiest way for the politicians and the media to characterize it. Everything that is wrong in this world of ours today can be, shamelessly, attributed to Islam and Muslims, from the Uyghurs in China, to the Rohingya in Myanmar, to the Kashmiris in Kashmir, the Palestinians in Gaza, and on, and on. There are those who understand how it is for the Muslims today to live under such accusations, they are brothers and sisters Jews who survived the Holocaust in Europe. They best understand what happened in Bosnia following the false promise of “Never again! Nie wieder! Never again! Plus jamais!” This photograph says everything:

This photograph speaks of the joint experience of the Bosnians and the Jews in Europe in the twentieth century:

Dear President Macron, I thought, as a European Muslim, that it was about an unintended error – attributing terrorism to Islam. Now I am, though, convinced that it is not about an unintended error, but it is about an intended need of depicting Islam as being the scourge of terror in Europe, as the heresy, the likes of the Cathar heresy in Montaillou. Further, I am even more convinced now that the bloody attacks occurring under mysterious conditions in Europe are, in fact, a premeditated plot against Islam and Muslims. The public is not privy to the faces of the attackers, dead or alive, but the vloices are reportedly heard of “Allahu Akber” – which could have come from the attackers, or which could have come from somebody else. One thing is certain, though – not one normal Muslim would have committed something like that. That could have only been committed by an outcast of Islam, a “murtat”, who is intent upon harming Islam and Muslims, the one who is intent upon frightening Muslims away from Islam and who is intent upon causing ire and revenge. Therefore the act of a murtat can not be described as “Islamic terrorism”. That is the Lucifer’s terror which has neither the religion nor the nationality. Anders Breivik, who, before the eyes of the world, killed sixty nine young women and men, insisting he was doing it in the name of Jesus, was not proclaimed a “Christian terrorist”, but rather a madman who needed mental care. Radovan Karadzic, who, in the name of the Serbian “Sveti Sava” committed genocide against the Bosniak Muslims  in Srebrenica, for which he was sentenced to life in prison, was not described as the “Orthodox terrorist” but rather a war criminal.

President Macron, we, Bosnian Muslims, have both the right and the obligation to advise you, in the name of Islam and the European Muslims, of the parallels of the horrific and real scenes of the Holocaust and the horrible psychopathic creatures of the Charlie Hebdo magazine about the Serbian genocide against my Bosnian people in Bosnia.

The first scene of the Holocaust:

The first creation of the Charlie Hebdo about the Serbian genocide in Bosnia: 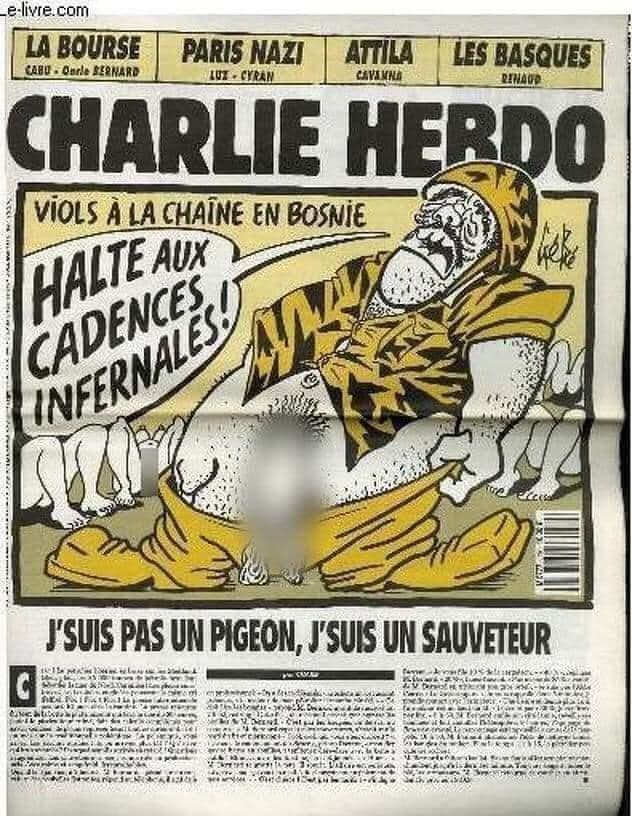 Since you take an oath to your value of the freedom of expression, President Macron, you have seen and read this creation of your beloved Charlie Hebdo, which you protect because it symbolizes the culture of your liberté and laicité against Islam and Muslims who, just like the Jews were stigmatized, are generally accused of terrorism in Europe. In this photograph, this caricature, President Macron, your Charlie Hebdo glorifies the Serbian mass rape of my Bosnian sisters with the Lucifer’s message: “Stop with the hard working conditions”. Not a single Bosnian had attacked or killed anybody in Paris or Nice. Why, then, are the Bosnian mothers and sisters deserving of being dehumanized by your “freedom of expression” while being innocent victims? Area you able, Macron, to imagine how we in Bosnia feel when looking at these creations? Horrible! Your “freedom of expression” can go to Hell, as well as your laicité, which is killing our Bosnian souls! Isn’t it a sign, President Macron, that in Paris, the cradle of the good sense, the end has come to the era of good behaviour which was marked by the values of liberté, égalité, fraternité?

The second scene of the Holocaust:

The second caricature, of the Charlie Hebdo, of the Serbian genocide in Bosnia:

Does this, President Macron, represent the freedom of expression of your Charlie Hebdo? The caricature of the limbs and organs of the dead civilians following the bombardment of the cities when your beloved one says: “Christmas is already in Bosnia”, and the inquisitive youth points to a penis and says: “I have asked for this of the Santa Claus”. Mr. Macron, are you able to sleep peacefully, after you have seen and read again this libertarian caricature of your beloved Charlie Hebdo, and then speak of Islam threatening your cultural and civilizational values? Is this your culture and your civilization? The feverish derangement over the bodies of the dead Bosniaks – for Christmas at that? In Bosnia we say: “jazuk”! Dommage!

The third scene of the Holocaust:

The third creation, of the Charlie Hebdo, of the Serbian genocide in Bosnia: 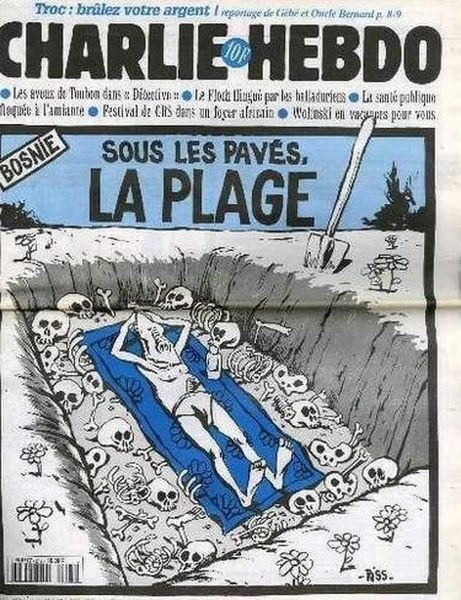 President Macron, isn’t this a sickness of the mind, which is more dangerous and more contagious than the lung sickness caused by the Corona virus? You must open your eyes and look straight into the face of the truth! You must, Macron, wake up from your dark dream, which dream does not allow you to see that the problem is neither in Islam nor in the Muslims, but that the problem is in the dark minds which cast umbra upon our minds and vision so we can’t see one another clearly. This darkness is leading all of us backwards into the dark ages of the witch hunt, of the inquisition of the Cathar heretics, to the bloody masquerade of the Bartholomew Night. We know that is which you do not want, yet we don’t know why you would not openly and unequivocally say it. Say to us, clearly and precisely, whether you still believe in the principles of: liberté, égalité, fraternité? Or whether you have abandoned them, abandoned them in the name of the freedom of a sick mind which spreads hatred of Islam and Muslims not only in France but in Europe and the rest of the world as well? Tell us, if you have the courage, in the spirit of your right to freedom of expression and sane mind.

Be that as it may, President Macron, I want you to know that we are, nevertheless, grateful to you for you have, like never before, unified the global Muslim Ummah, from Riyadh, Tehran, Istanbul, Cairo, Islamabad, Jakarta, Rabat, all the way to Yemen and beyond. They have all stood up, in a day, to defend the honour of Islam, and the prestige of the Allah’s Messenger, and the pride of over a Billion of Muslims throughout the world. Those, who thought that the Ummah had no global shield in the Caliph, now know that the Caliph is the force in the one, the unifying, and the invincible global Muslim Ummah. The Charlie Hebdo contributed to that. And that should not surprise us. The Allah’s Messenger said: “Allah will revive this religion through a corrupt individual” – (Inna Allahe lajūlidu hadha al-dīne bi al-radžul al-fādžir, Sahihani).

In closing, dear President Macron, please allow me to send you best regards from my Bosnia and wish you to liberate yourself from the stupidity and hatred of the Charlie Hebdo, which publication is fundamentally opposite to the freedom of expression of a sane mind. The Charlie Hebdo is the embodiment of infectious contagion of a sick mind, the contagion which needs a vaccine to prevent the spread of the disease. The sooner, the better. Until then let us be responsible, wear masks, and keep at distance from a disease which kills sane minds and healthy brains.

With expression of respect, please accept, again, my Bosnian selam!