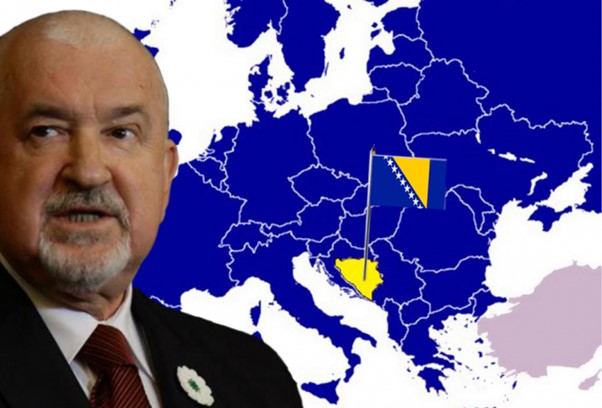 In the name of One and Same God, the Beneficent the Merciful

In the name of peace of humanity

In the name of human fraternity for peace

AN APPEAL OF COVENANT

In the name of the word of Old Covenant, the Torah

In name of the spirit of New Covenant, the Gospel

Vostra Santità the head of the Catholic Church Pope Francis,

Your Eminence the Patriarch of Moscow and all Russia Cyril,

In the name of the peace code of Last Covenant, the Qur’an

Your Eminence the Grand Imam of Al-Azhar Sheikh Ahmad Al-Tayyeb,

Your Eminences, I am writing you this letter because I believe that you are fully aware of the significance of the Commandment of the Old Covenant: – You shall not kill.

Of course, I am aware that I am too small a Mufti from Bosnia to advice your Eminences what to do, but, on the other hand, my Bosnian message about what is happening in Ukraine is too important to be ignored by anyone let alone by your Eminences.

My Bosnian message is very simple:
– Raise your joint voice, your Eminences, against the killing of innocent people in Ukraine. This is what the innocent humanity at risk nowadays is expecting from you. It expecting from you to be one human voice of primordial covenant with Almighty God against killing of an innocent man anywhere.

Who can do that, Your Eminences, if not you?

Who can turn his face to Almighty God to ask for forgiveness and mercy if not you by your united humble voice against tyrants who are capable mercilessly to kill us all?

Who can tell to these heartless and arrogant politicians that “enough is enough” of these endless terrible wars that threaten the very existence of our planet if not you who possess the key to pent their hearts?

Who can give a hope of peace and security to humanity by the voice of heart and mind that has presumably a touch with God if not you who claim to have His blessings?

You can do it, Your Eminences!

You must do it because that is your mission you have pledged to God and you have sworn   your duty and service to God and humanity.

Don’t you see, Your Eminences, that those who possess thousands of nuclear warheads are obsessed by their imagined and real power.

Don’t you notice that they are blind to see that the weapons they have invented against their imagined and real enemies will ultimately kill them themselves:
– Man has thought and decided. However, he killed himself the way he measured. Yes, indeed – he killed himself the way he calculated. Then he looked frowningly and scowlingly – Qur’an 74:18-23.

Your Eminences, allow me to ask you humbly that you meet as soon as possible anywhere on this endangered planet of ours for the sake of stopping the war against humanity in Ukraine before it is too late.

I feel I have the right to ask you because the disregard of the sanctity of human life, which resulted in genocide, has recently started in my country Bosnia to continue later on in Iraq, Syria, Libya, Yemen and now in Ukraine.

Your Eminences, humanity is faced with a madness of human mind that has never seen before in human history.

Therefore, we must demonstrate a soundness of human heart and mind that has never seen before in human history.

In order achieve that noble goal at this time, the humanity needs sound guidance, it needs mindful and courageous spiritual and moral leaders.

Your Eminences, I see this guidance, mind and courage in you provided that you ready to perform the role of Noa who had bult the Ark for Human Salvation when it had been faced with a global flood.

Indeed, the today’s humanity is in the similar situation of a flood of human blood and tears. It is clear that the only way out the Ark of global peace and security for all humanity.

May God Almighty give you and us all a wisdom and courage to build the Ark of peace and to be beacon for human salivation! Amen!

Grand Mufti of Bosnia in war and in peace

Winner of the 2003 UNESCO Peace Prize