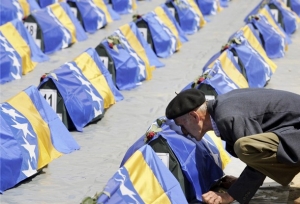 Eighteen months since the beginning of presenting evidence, the Court of Bosnia and Herzegovina is due to announce a first instance verdict for the crimes committed in Bratunac next week.

Next week, the Trial Chamber, sitting in the case of Zdravko Bozic, Mladen Blagojevic, Zeljko Zaric and Zoran Zivanovic, is due to pronounce a verdict against the former members of the Military Police Squad of Bratunac Brigade with the Republika Srpska Army, VRS, who are charged with crimes against humanity in the Bratunac area.

The State Prosecution charges the four men with having participated in the guarding of buses, which transported civilians from Potocari to “Vuk Karadzic” school building in Bratunac, where they were detained, mistreated and killed in July 1995.

Now that both parties have presented their closing arguments at the end of the 18 months of evidence presenting, the State Court is due to pronounce a first instance verdict on Wednesday, October 29.

On Monday, October 27 the trial is due to continue in the case of Milorad Trbic, former assistant commander for security with the VRS Zvornik Brigade, who is considered responsible, by the Prosecution, for genocide and participating in the forcible detention and execution of Bosniaks from Srebrenica.

Next week the Defence of Vinko Kondic, Bosko Lukic and Marko Adamovic will cross-examine the Prosecution witness, who spoke, at the previous hearing, about the role of the three indictees in the capture and torture of Bosniaks in the Kljuc area. The hearings are due on October 27 and 29.

The Appellate Chamber of the Court of Bosnia and Herzegovina will continue listening to witnesses’ statements at the retrial of Kreso Lucic on October 28. The former commander of the Military Police Squad with the Croatian Defence Council, HVO, was sentenced, by a first instance verdict, to six years’ imprisonment for having tortured Bosniak men in the detention camps, which were formed in Kresevo municipality during the war.

On the same day the State Prosecution is due to continue presenting material evidence at the trial of Novak Djukic, former commander of the VRS Ozren Tactical Group, who is charged with having ordered the shelling of Tuzla in May 1995. On that day, the Defence of Miodrag Nikacevic, a former policeman from Foca, who is charged with crimes in Foca municipality, will examine its last witness.

The Prosecution continues presenting evidence against Gojko Klickovic, Jovan Ostojic and Mladen Drljaca, charged with crimes committed in Bosanska Krupa, on October 28 and 29.

New Prosecution witnesses are due to testify at the trial of Krsto Savic and Milko Mucibabic on October 29 and 30. The two men are charged with crimes committed in Nevesinje, Kalinovik, Gacko and Bileca municipalities in 1992. At that time Savic was chief of the Safety Services Center in Trebinje and Mucibabic was policeman in Nevesinje.

The day after the trial is due to continue in the case of Ratko Bundalo, Nedjo Zeljaja and Djordjislav Askraba, who are charged with having participated in the murder, torture, rape, forcible disappearances and detention of Bosniaks, as well as destruction of their property, in the Kalinovik area during the course of 1992.