Several hundred Tuzla citizens have come out onto the streets to protest the verdict handed down by the War Crimes Court in Belgrade in the case of Ilija Jurisic, a native of Tuzla.

On Tuesday morning, protestors gathered in the town center and walked in a peaceful procession to the part of town known as Brcanska malta, expressing dissatisfaction with the verdict that found Ilija Jurisic guilty of a crime committed there in 1992.

No incidents or traffic interruptions were reported during the demonstration, which was organized by the Front Association, the Truth, Justice and Reconciliation Association, the Oko Youth Organization, the Young Antifascists of Bosnia and Herzegovina and the Muliti Association. 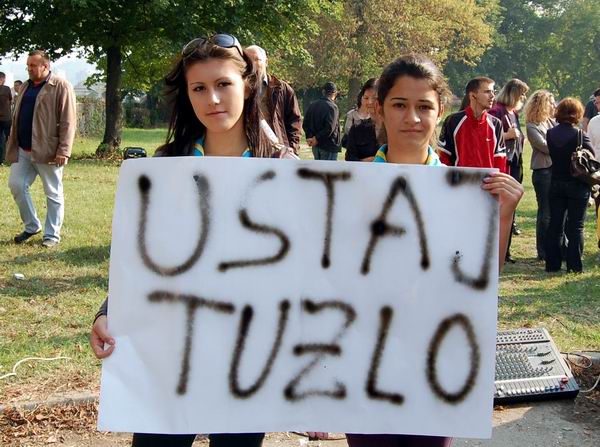 The War Crimes Chamber of the District Court in Belgrade sentenced Jurisic, a citizen of Bosnia and Herzegovin, to 12 years in prison for applying “illicit military means” on the occasion of the attack on the convoy consisting of members of the 92nd Motorized Brigade with the Yugoslav National Army, JNA, in Brcanska Malta on May 15, 1992.

Jurisic was sentenced, by a first-instance verdict, as the duty chief at the Operational Headquarters of the Safety Services Center in Tuzla, for having issued “an immediate” order for the attack on the JNA Brigade, during its withdrawal from “Husinska buna” military barracks in Tuzla.

The indictment states that at least 51 JNA members were killed and about 50 were wounded, while a large number of military and medical vehicles were destroyed.

Sinan Alic, President of the Truth, Justice and Reconciliation Association, which followed the trial against Jurisic, told BIRN – Justice Report that by organizing the protest members of Association wanted to express their dissatisfaction with the verdict and the entire trial.

“The protest was peaceful and serious. The citizens walked from the Bosnian Cultural Center in Tuzla downtown to Brcanska malta, expressing their dissatisfaction,” Alic said.

Following the verdict, the associations that organized the protest invited citizens to “express their full support to the victims of politics and convey a message to local politicians that it was high time for them to leave before they have sold all patriots in this country”.

NGOs in Tuzla believe the BiH authorities have not done enough to protect the rights of Ilija Jurisic.

Some Bosnian media have also criticised the verdict. Bakir Hadziomerovic, editor of the popular political TV programme, “60 minutes”, said in the programme broadcast on September 28 that this was “a typical Kafka trial”, adding that Jurisic was “the first post-Dayton victim of the Serbian judiciary and incompetent local authorities”.

“Ilija Jurisic went under only because he did not want to be a fascist during the war,” Hadziomerovic said.

Ilija Jurisic was arrested under an international warrant at Nikola Tesla Airport in Belgrade on May 14, 2007. The War Crimes Prosecution in Belgrade took over his case from the Military Prosecution of Serbia in 2004. The trial began on February 22, 2008.

As reported by Srna news agency, Jurisic denied all the charges in the indictment, stating that he simply conveyed the order “to open fire in response to fire”.

Following the verdict Jurisic was remanded in custody. The time he has spent in detention will be calculated towards his sentence.