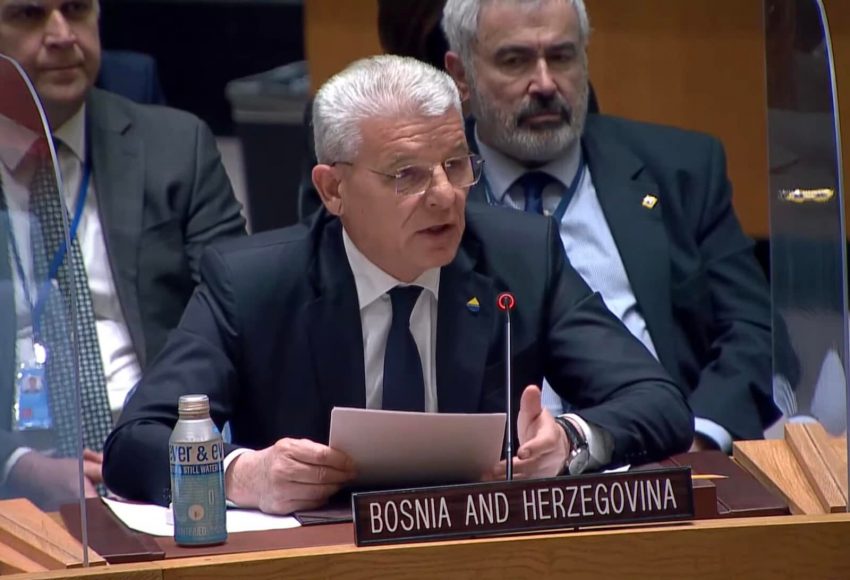 Let me address some key points regarding the situation in Bosnia and Herzegovina. For over ten months, our country has been in a deep political crisis. This crisis was caused by the secessionist threats, blockade of the institutions and the moves of the Republika Srpska  authorities against the BiH Constitution, the Dayton Peace Agreement and 27 years of its implementation. 

In this time frame since the end of the war, in accordance with the Dayton Peace Agreement and with the support of the international community, we have made substantial progress with reforms. Clear provisions of the Article 3 of the Dayton Constitution of BiH, prescribe the possibility for Bosnia and Herzegovina to establish additional state institutions and take over the competencies it needs to preserve its sovereignty, territorial integrity, political independence and international subjectivity.

By implementing this provision of the Constitution and the Dayton Agreement, we have formed a joint army, intelligence service, ministries, state tax system, judiciary and other institutions, that have strengthened peace and because of them, the state became able to function independently. As all relevant analyzes show, these reforms have benefited citizens from all parts of Bosnia and Herzegovina, including both entities and the Brčko District.

We have implemented these reforms, with the consent of political representatives from both entities and all peoples, while the decisions were made in the Parliamentary Assembly of BiH, in accordance with the prescribed procedures. Furthermore, we have also done so with the support of the international community, including this esteemed body, for which we in Bosnia and Herzegovina are very grateful.

In the period from 1997 to 2014, when these reforms were being implemented, the Security Council in its Resolutions on the situation in our country gave clear support to the process of strengthening state institutions and encouraged the authorities in Bosnia and Herzegovina to follow this path. Along with this support, in Resolutions 2123 and 2183 from 2013 and 2014 respectively, this body further stated that the process of “strengthening state institutions fosters the building of a fully functional and self-sustaining State able to integrate itself into the European structures.”

Unfortunately, in Bosnia and Herzegovina, during the past ten months, we are witnessing efforts to destroy all that has been achieved through the implementation of the Dayton Agreement.

The Republika Srpska authorities are threatening to unilaterally disband all these state institutions and appropriate their competencies, and for that purpose they have adopted or sent to the procedure specific laws in the field of justice, state property and medicines. This threatens the territorial integrity and sovereignty of Bosnia and Herzegovina, because, as I have said, the Dayton Constitution unequivocally states that additional State level competencies are needed in order to preserve its territorial integrity and sovereignty.

Considering the mandate of the Security Council, let me warn you of the dangers of these secessionist activities directly undermining the Dayton Peace Agreement as a cornerstone of peace and stability in Bosnia and Herzegovina, and in this part of Europe as well.

Given that Bosnia and Herzegovina, due to a complex decision-making system, does not have a fully developed proper mechanisms to prevent secessionist activities in a timely manner, we need the support of the international community. Experience with the implementation of the Dayton Agreement shows us that such support has always proved to be good and effective.

It is therefore important that the Office of the High Representative, as a part of the Dayton Peace Agreement, does its job in accordance with the mandate that was given to it.
The High Representative, Mr. Schmidt, has decided to suspend the secessionist state property law, which is important for stability.
But in order to completely stabilize the situation in Bosnia and Herzegovina, it is necessary to annul all unconstitutional laws, as well as the conclusions of the National Assembly of the Republika Srpska of December 10, 2021 and all other acts that are contrary to the Dayton Peace Accord.

Furthermore, it is also necessary to unblock the work of institutions. Since the summer of last year, the state institutions of Bosnia and Herzegovina, led by the Presidency, the Council of Ministers and the Parliament of Bosnia and Herzegovina, have not worked at all, due to the absence of the representatives from Republika Srpska and the lack of quorum. Recently, after the pressure from the international community, representatives from the Republika Srpska began attending the sessions, but still refuse to work at full capacity and make decisions, which means that the blockade has not stopped it was just slightly mitigated due to announced or imposed sanctions by the international community.

I firmly believe that in the current geopolitical situation, when we feel the strong consequences of the aggression on Ukraine on the stability of Bosnia and Herzegovina and the entire Western Balkans, the European Union should respond positively to the request for candidate status, within the framework of the new enlargement methodology. Despite numerous internal disputes, we have managed to find a united voice on this issue and I think that should be encouraged.

Granting candidate status, coupled with restrictive measures against the Dayton subversives, can ensure the full stabilization of the situation in Bosnia and Herzegovina and initiate a new round of reform momentum.

Bosnia and Herzegovina is committed to strengthening peace in the region, through strengthening good neighborly relations and regional cooperation. We are committed to having good relations with our neighbors, based on mutual respect. All open issues need to be resolved through dialogue and agreement, or in the absence of a consensus-based solution, through the institutions in charge of implementing international law.
Bosnia and Herzegovina supports regional cooperation. We participate in a vast number of regional initiatives, which aim to promote political and other forms of cooperation in the region. Bosnia and Herzegovina, along with other Western Balkan countries, has joined the Common Regional Market as part of the Berlin Process.

We believe that strengthening regional economic cooperation, while respecting European Union standards in this area, can have an extremely positive impact on the overall situation.

Although as a state we do not undermine anyone, we are concerned about the signals from a part of our neighborhood. We are particularly concerned by the rapid armament of neighboring countries, primarily Serbia, which, by including the BiH entity Republika Srpska in its national defense strategy, has shown worrying disrespect for the sovereignty and territorial integrity of Bosnia and Herzegovina.

We are also concerned about the interference of the Croatian authorities in the regulation of the Election Law. The position of the President of Croatia that he supports the unilateral change of Dayton through the establishment of a third entity in Bosnia and Herzegovina is especially worrying, as well as the fact that he is ready to condition possible NATO enlargement with changes of the Election Law in our country.

The election law in Croatia is their internal issue and we do not interfere in that. Therefore, we expect that Croatia will not interfere in the way we in Bosnia and Herzegovina will regulate our electoral system. In its judgments, the European Court of Human Rights in Strasbourg ordered Bosnia and Herzegovina to reform the Constitution and the Election Law in order to guarantee all citizens their individual rights, and not to further increase the privileged status of constituent peoples over other citizens, as persistently requested by the Croatian authorities.

For the first time in the past 27 years, conducting elections has been called into question because Croat ministers in the Council of Ministers are preventing the provision of the necessary funds for the elections.

Given the unforeseeable consequences that the obstruction of the elections would have on stability, should the obstructions continue in the Council of Ministers, the responsibility then lies with the Office of the High Representative who must take appropriate decisions to provide the necessary finance resources for the conduct of elections.
In November, the Security Council will decide on the extension of Althea mission. According to the Security Council resolutions, the European Union mission Althea, along with the NATO headquarters in Sarajevo, is the legal successor of the previous military missions established by the Dayton Peace Agreement. The presence of international military forces is extremely important for maintaining peace and implementing the military aspects of the Dayton Peace Agreement.

I take this opportunity to call on the Security Council, on behalf of the authorities of Bosnia and Herzegovina, to extend EUFOR’s mandate in November, as it is an important guarantor of peace and stability in BiH and a mechanism to deter those that may threaten peace.
In January this year, there were several serious security incidents directed against the returnee population, and after the increase in the number of EUFOR members, there were no more security challenges.

Finally, let me say that the way out of the current situation lies in strict adherence to the Dayton Peace Agreement and all 27 years of its implementation. All actors in Bosnia and Herzegovina must respect the existing framework and solutions that our country has in force. No one has the right to unilaterally destroy existing and painstakingly agreed solutions.

Thank you for your attention.