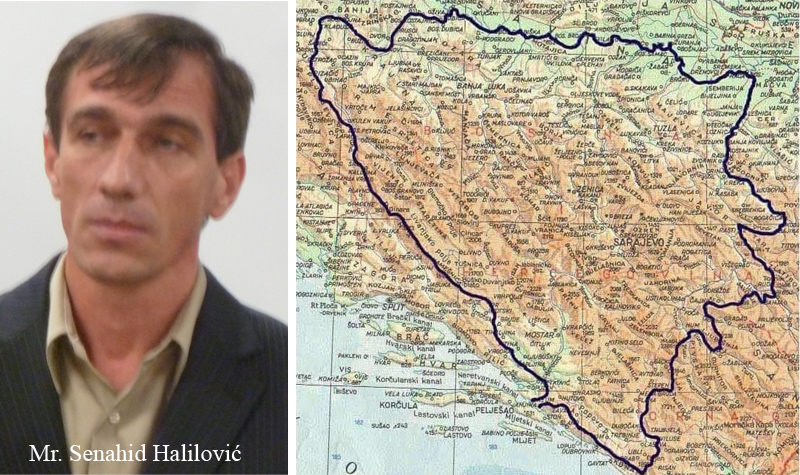 How will the citizens of BiH have confidence in Europe – who was silent while the screams and cries of “protected people” in Srebrenica echoed in the sky, under which genocide was committed. The same Europe calmly stood by and watched ethnic cleansing in the war against Bosnia and Herzegovina (1992-1995). How can the citizens believe in the UN, which “protected people and their rights”? – while genocide was committed against those very people they claimed to protect. How can citizens have confidence when ethnic cleansing and genocide were rewarded with a constitution that does not guarantee equal rights?

It has been 26 years since the signing of the Dayton Peace Agreement. Some of the signatories admitted that the agreement was reached improperly, and that an unjust peace had been obtained. It was said that “peace, even if unjust, is better than any war.” With such peace, the new Dayton Constitution of Bosnia and Herzegovina was signed. The agreement not only enabled, but also obliged the signatories to monitor, implement and create a situation of peace, with full respect for human and civil rights. This is not accidental, because the creators of the so-called agreement and new constitution of Bosnia and Herzegovina knew that many things did not fit properly. They knew that the rights of all citizens had been taken away, and they knew that minorities and victims of genocide were stripped of whatever respect the legal system had given them. Half of the population was forcibly expelled from their homes.

A new Bosnia and Herzegovina was created (at the same time the Republic of Bosnia was abolished) with two entities and 10 cantons, in which ethnic prefix is ​​above civil rights, law, and science. If you were part of the three major ethnic groups (Bosniak, Croation, Serbian), you were not subject to as much discrimination as someone who was not.

In order to implement Annex 7 of the so-called agreement, it was necessary to provide basic rights to returnees. The right to life, property, language, free opinion, and political action. This so-called agreement and constitution provided civil rights in some areas, but in some areas, it simultaneously denies these rights. To add to the evil, local politicians skillfully misused it to their advantage, to the detriment of the citizens and the state of Bosnia and Herzegovina. The system praises those who feed into it. So, some citizens realized that the only way to get a job was to either get involved in politics (applaud local politicians) or leave the country.

As a result, Bosnia has become one of the countries with the most registered political parties in the world. It is a sad fact that educated people – instead of running factories and working on economic development – sit in municipalities, local offices, local communities, counties, cantons, and entities as political favors and pawns.

Now, some politicians like Dodik would like to return competencies to the federal level illegally and unconstitutionally. The transfer of competencies has taken some steps in the functioning of the state of Bosnia and Herzegovina, but has not done anything to improve the rights of citizens. None of the politicians in the previous 26 years wanted or did not want to acknowledge this. The citizens of Bosnia – honest and fair people are suffering the consequences. Refugees and expelled people suffer the most, because they are allowed to return but without rights.

What about those citizens that the Dayton’s Constitution calls others? Just one clause of this Constitution is enough to make things clear. It is used to recognize discrimination.

The Presidency of Bosnia and Herzegovina consists of three members: one Bosniak and one Croat, each elected directly from the territory of the Federation, and one Serb, elected directly from the territory of the Republika Srpska. According to this article, a Serb from the Federation cannot run for the presidency, nor can a Bosniak or a Croat from the RS. “Constituent peoples” are discriminated against here.

In some political circles in Bosnia, constituents are referred to as “constituent peoples”. They are discriminated against if they are a minority. The current constitution supports ethnic cleansing and the non-return of refugees.

So, if the constituents are discriminated against, if there are 4 legal systems, if the rights are guaranteed and there are none, then the constitution should be changed for the better and for the benefit of all!

How do we bring back refugees, when both the constitution and the government guarantee them no rights?

Changes must occur for the better and for the benefit of all citizens. Let more be elected (three or four members of the presidency), if there cannot be one president, let whoever wants run, let citizens choose who they want. Let there be one from each nation and one from the others, and let them be elected by all citizens of Bosnia and Herzegovina, so that all members of the presidency work for all citizens of Bosnia. Thus, when there are pens the members of presidency work only for “their constituents” and the state cannot move forward. The citizens know, and above all the expelled, very well, know who likes the pens.

Do citizens have the right to ask these questions? Who and when will implement the Sejdic-Finci verdict? What about the subsequent verdicts?

Who has the right to ask these questions? Politicians in Bosnia? In Europe? The United Nations? America? US President Joe Biden? Citizens ask both domestic and foreign politicians and institutions about their rights. Those who created the Dayton Constitution, guarantee its implementation, and guarantee those rights. But citizens, and especially refugees and displaced persons, are losing, or have already lost, confidence in domestic politicians, in Europe in law and justice. How could they not, when they have been repeatedly manipulated by them? There are also those who would establish states on an ethnic prefix.

The state of Bosnia and Herzegovina, equal and united, should be set up in such a manner that the national prefix, if any, is below the law. This is the only way to have a peaceful Bosnia. How will the citizens of BiH have confidence in Europe – who was silent while the screams and cries of “protected people” in Srebrenica echoed in the sky, under which genocide was committed. The same Europe calmly stood by and watched ethnic cleansing in the war against Bosnia and Herzegovina (1992-1995). How can the citizens believe in the UN, which “protected people and their rights”? – while genocide was committed against those very people they claimed to protect. How can citizens have confidence when ethnic cleansing and genocide were rewarded with a constitution that does not guarantee equal rights?

This is not lost on UN Secretary-General Antonio Guterres. Should the denial of rights belittle the state of Bosnia and Herzegovina as well as its citizens? That same Bosnia which, under the rule of Ban Kulin, had a constitution in which the rights of others and minorities were guaranteed. Bosnia, not too long ago, was a teacher of tolerance and coexistence, and was for centuries. Should we belittle that Bosnia and its citizens? Bosnia was a teacher of tolerance and coexistence through the centuries.

Should the lives lost for Bosnia be belittled? Should the victims of genocide live in a nation that oppresses their rights? Should the families of the innocent killed be ignored?

Currently, a member of the presidency of Bosnia and Herzegovina, Milorad Dodik, would like to unconstitutionally return competencies from the level of the state of Bosnia and Herzegovina to the level of the entities. These same competencies were transferred to the level of the state of BiH by the constitutional will of both entities. What kind of rhetoric is that, if it is not inciting war? He would like to disrespect the High Representative in Bosnia and Herzegovina and his decisions, constitutional law and the transfer of competence. He would go back to the original Dayton constitution, which he and politicians of this type understand as a buffet, where they take what they personally like and what could call into question and reconsider their political code of conduct, discard. Dodik is just one link in the chain. Such policies and behavior should be urgently sanctioned. In addition, corruption has taken off in Bosnia, where the authorities should take urgent action. Otherwise, citizens will fear war or war will be imposed on them. The displaced will wait for their rights or die before they receive justice.