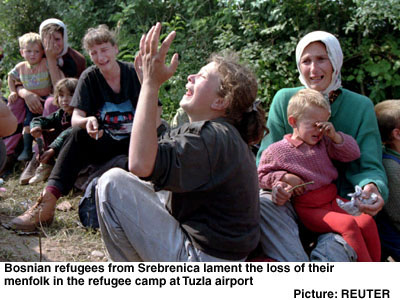 On 16 June 2008 the District Court at The Hague will hear the first civil action brought against the Dutch State by relatives of the victims of genocide at Srebrenica. Hasan Nuhanovic and the family of Rizo Mustafic are seeking to establish that the Dutch state is responsible for the failure of Dutch troops acting under a United Nations mandate to protect their family members massacred at Srebrenica in July 1995. Hasan Nuhanovic, a U.N. interpreter who lost his father, mother and younger brother, and the family of Rizo Mustafic, an electrician employed by the Dutch battalion of the United Nations Protection Force (UNPROFOR), claim that the Dutch government failed to protect the lives of their relatives after the safe area established by U.N. Security Council Resolution around the town of Srebrenica in Eastern Bosnia was allowed to fall into the hands of the Bosnian Serb Army. The Nuhanovic and Mustafic families were among thousands of refugees who sought protection inside the compound of the U.N. base at Potocari but were then delivered by the Dutch UNPROFOR forces into the hands of Serb General Ratko Mladic. Dutch soldiers in U.N. blue helmets are alleged to have watched on as women and young girls were taken away and raped and men and boys separated before being taken away for summary execution.In a tort action against the Dutch state in which much of the legal debate revolves around the division of responsibility between the United Nations and national states, the plaintiffs’ lawyer Liesbeth Zegveld will argue that the Dutch government and the Dutch command within UNPROFOR were responsible for the gross negligence shown by Dutch troops, were primarily concerned for the safety of their national contingent and showed scant regard for the safety of the civilian population entrusted to their care. The families are concerned above all to establish the truth about why Ibro, Nasiha and Muhamed Nuhanovic and Rizo Mustafic were allowed to go to their deaths in brutal circumstances when the United Nations had promised to ensure their safety.

Prof. Dr. Liesbeth Zegveld studied law at Utrecht. She obtained her doctorate with distinction in 2000 and was sworn in as an attorney in Amsterdam the same year. In 2005 she became a partner at BÃ¶hler Franken Koppe Wijngaarden, where she is a member of the international law & human rights department. She has written many articles on issues in the field of international humanitarian law. She is a guest lecturer at the University of Amsterdam and a member of the International Law Association’s Committee for Compensation for War Victims. In September 2006 she was appointed professor of International Humanitarian Law, in particular the Rights of Women and Children, at Leiden University.