Once again, we are jarringly dragged back to the past.
In early May, a suspected mass grave located in the south of Serbia suddenly came to light. The site is believed to contain the remains of at least 250 Kosovo Albanians, killed â€“ some would say murdered â€“ by Serbian forces during their genocidal rampage through Kosovo during the spring of 1999. Exhumation of the site could yield up to 500 bodies.

The find is yet another crushing indictment of Slobodan Milosevicâ€™s crude and repressive regime, and the terrible legacy it left behind.

The newly discovered grave, located in a hilly, rural area of Rudnica near the town of Raska, is in close proximity to Serbiaâ€™s border with Kosovo. A small building stands directly over the bodies, its foundations, according to the BBC, deliberately constructed to hide the site. A newly built parking lot helps to complete the deceptive facade.
This â€œnewâ€ gravesite is by no means unique; sadly, in the former Yugoslavia, mass graves come with the territory. In fact, this site is the fourth such mass grave of ethnic Albanians found inside Serbia since 2000. At least two other such locations were discovered inside Kosovo itself, in addition to scores of smaller sites. In each case, the majority of the bodies were those of civilians, including women, some pregnant. Victims ranged from the frail elderly to a one-year-old child. Reportedly the graves even held babies, with dummies stuck into their mouths.

Beginning in 2001, in a series of visually surreal exhumations, the remains of more than 830 ethnic Albanians were gradually unearthed, in varying states of decay and degradation. Over 700 bodies were uncovered in a mass grave deep inside a police training compound in the Belgrade suburb of Batajnica. 77 additional corpses came to light in the same police unitâ€™s training center in the eastern Serbian town of Petrovo Selo. Yet another 50 bodies were uncovered near the Serbian town of Perucac.
All in all, it was a stunning catalogue of horrors. 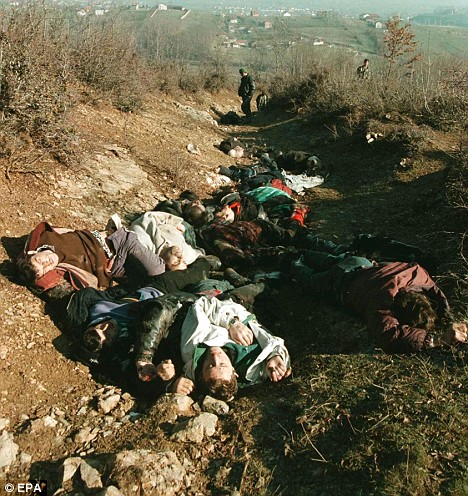 These series of modern forensic digs were not for the faint of heart, and their descriptions do not make for easy reading. From an article by the highly acclaimed International War and Peace Report (IWPR), 2003:
â€œâ€¦A shapeless, black, glittering mass about 2.5 meters down immediately caught the reporterâ€™s eye. It was a mass of plastic bags containing bodies. They had been buried in layers. Some had clearly been pushed into the grave by people, while others had been shoved in by diggers, or tipped in by dump truckâ€¦â€

The story grows ever more macabre, like a perverse plotline for a Quentin Tarantino horror film. In a desperate effort to hide the incriminating evidence, the Batajnica bodies were stolen from Kosovo, some dug up from primary graves, then hauled in freezer trucks like great slabs of meat, and finally dumped into the river Danube.

There was only one snag: unable to defy the laws of nature, the freezer trucks inevitably resurfaced! It was as if the bodies themselves refused to remain hidden, silently rebuffing their killersâ€™ bidding.

The exhumationâ€™s grisly description continues:
â€œCar tires had been placed at the bottom of the pitâ€¦ and covered by planks with nylon sheeting on top. The bodies had been thrown on top of them and doused in petrol. This had not been successfulâ€¦ Because the bodies had previously lain in the water, they had become so waterlogged that the fire did not destroy themâ€¦â€
Ironically, the revelation of these ghoulish mass graves was strategically used by then Prime Minister Zoran Djindjic to quash any potential opposition in Serbia to the extradition of Slobodan Milosevic to the Hague Tribunal. In that respect, these tormented victims had at last found a voice â€“ as compelling, albeit unwitting witnesses against Milosevic and his many willing executioners.

A decade later, we sit upon the precipice of another series of uncertain and fearful revelations. Though for some, reports of a new mass grave bring hope. Prominent Belgrade civil rights attorney Draguljub Todorovic, for example, believes that the site may hold the remains of the Berisha clan, perhaps up to 40 family members. Todorovic served as legal representative for the Albanian victims of the massacre at Suva Reka, and is committed to seeking a token of belated justice for them.

And how will this latest exhumation be handled? The last series was bitterly criticized for its utter lack of transparency and absence of Albanian participation, and for the manner in which the bodies were deliberately â€œdoled outâ€ to Kosovo authorities at a painfully sluggish pace.

This time around, EULEX (European Unionâ€™s Rule of Law Mission in Kosovo) has been largely responsible for the discovery of the gravesite, and must be involved in supervising its exhumation as well, and without further delay.

â€œOnly correctly and transparently conducted exhumations followed by DNA testing can bring answers,â€ believes internationally respected forensic anthropologist Dr. Eva Klonowski, who has personally overseen dozens of complex exhumations in Bosnia, â€œand this is what should be demanded. All operations should be monitored by international forensic specialists, and the examination of all remains closely monitored.â€

And, we would add, full Albanian expert participation is vital, together with a strict time-table for the prompt return of all remains to Kosovo, where the appropriate DNA work-ups and matches should occur. Perhaps a handful of families may finally gain some semblance of peace with their agonized pasts. Even the single bone of a loved one can make a palpable difference, as Dr. Klonowski has so often personally witnessed.

The human toll from the Kosovo conflict is tragic: according to Belgradeâ€™s Humanitarian Law Center, the number of killed and missing persons from the Kosovo conflict stands at over 13,000. Of those, some 1,860 people remain missing, including over 1,000 Albanians, nearly 500 Serbs, and hundreds of members of other ethnicities. All with family members who anxiously await some news of their loved ones. Repatriation of missing family members continues to be a distant dream for too many people in former Yugoslavia. A proper and respectful burial remains a fundamental guiding principle for cultures throughout the world.

The dead can indeed bear witness, but only if we are patient enough to decode their disparate, heartrending messages. So let the digging commence â€“ now! No more games, no more excuses. Those bodies are not the property of the Serbian state, and should not be subject to that governmentâ€™s whims and strategic vagaries. Reconciliation begins with the truth, and the truth in the Balkans begins with digging up the bodies.