On July 11, 2008 the Bosniak-American Advisory Council for Bosnia and Herzegovina organized the commemoration of the 13th anniversary of the Srebrenica Genocide Memorial to remember the innocent victims who have lost their short lives on July 11, 1995 at the hands of the Army and Police of Republika Srpska. The memorial was held on the Capitol Hill, Washington DC, from 12:30 pm to 1:30 pm in the Rayburn Office Building room 2200, also knows as the room for Committee on Foreign Affairs. The memorial marked the tragic episode of human history with the Bosfam’s memorial quilt project exhibit and a remembrance and commemoration book. The quilt project is a joint project by Bosfam and the Advocacy Project in the United States. It is a living memorial to the victims of the genocide, consisting of individual panels. Each panel is dedicated to a single victim woven by refugee women from Srebrenica living in Tuzla. The remembrance book, along side with the quilt, is a symbol of expression of thoughts and mourning for the victims which will be sent to the mothers of Srebrenica and survivors. The Srebrenica Genocide memorial was attended by a number of people who not only are friends of Bosnia, but who believe in justice for the innocents. 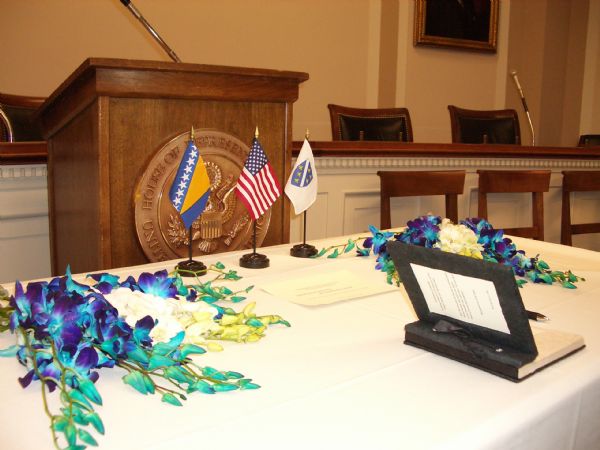