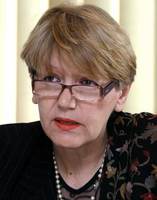 The statement is in response to yesterdayâ€™s act of vandalism against the Helsinki Committee for Human Rights by the violent group who is self-named Movement 1389, that the media ill-fatedly calls a protest. The Movement 1389 has unlawfully protested against the arrest of Radovan Karadzic for more than seventy days, with the permission and presence of state institutions. The non-governmental organizations listed as signatories below demand a response from President Boris Tadic and the Minister of Internal Affairs Ivica Dacic, and herewith we remind that:
– for more than a week the media has not ceased its pursuit of Sonja Biserko, the President of Helsinki Committee for Human Rights in Serbia, in relation to the Report of Helsinki Committee for the year 2007;
– Sonja Biserko, without any sort of reaction and protection is exposed to incredible pressure, discrimination, and chauvinist antics; moreover, it is being done by individuals who at minimum would undergo moral condemnation in any respectable country respecting human rights standards and democratic values, and in a state with the rule of law they would be prosecuted;
– the mediaâ€™s pursuit, in the name of so-called protection of freedom of thought, denies Helsinki Committee and Sonja Biserko their freedom of thought and calls for the lynching of Sonja Biserko as a traitor of the â€˜homogenous Serbianhoodâ€™;
– through intimidating Sonja Biserko, they intimidate all those who remember and who want to bring to light facts and demand responsibility for the crimes committed in our name during the 1990sâ€™. The attacks against Sonja Biserko are an attempt to eradicate facts put forward in the Report.

Non-governmental organizations demand that state institutions finally start respecting the Constitution and laws of this country, and stop treating legal issues as ideological and political issues. We also demand that in accordance with the Constitution and laws of this country, which include ratified international documents, the state finally start to implement, without political thought or calculation, the provisions regarding the suppression of activities and operations of organizations that promote hatred, discrimination, racism, and all other forms of intolerance and hatred.

Non-governmental organizations demand that state institutions stop addressing us with releases and start applying the Declaration on Human Rights Defenders adopted by United Nations General Assembly on March 8, 1999 (Declaration on the Right and Responsibility of Individuals, Groups and Organs of Society to Promote and Protect Universally Recognized Human Right and Fundamental Freedoms). The Declaration, in Article 12 Clause 2, provides that the state must undertake all necessary measures to ensure protection from any kind of violence, threat of retaliation, de facto and de jure hostile discrimination, pressure or any other arbitrary deed resulting from the legitimate use of oneâ€™s rights guaranteed by the Declaration.