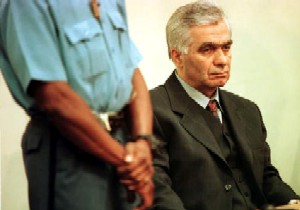 Momcilo Krajisnik, one of the highest ranking war-time members of the Bosnian Serb leadership, was transferred yesterday to the United Kingdom to serve his 20-year sentence for crimes committed against non-Serb civilians during the war in Bosnia and Herzegovina.

Momcilo Krajisnik was sentenced on 17 March 2009 by the Appellate Chamber of the Hague Tribunal, which found him guilty of deportations, forcible transfer and persecution of Bosnian Muslim and Croat civilians including women, children and elderly persons. These crimes were committed between April and December 1992 in the municipalities of Zvornik, Banja Luka, Sanski Most, Sokolac, Prnjavor, Bratunac, Bijeljina, Bosanska Krupa and Trnovo.

He was found to have participated in a joint criminal enterprise whose objective was to ethnically recompose the territories under the control of Bosnian Serbs by drastically reducing the proportion of non-Serbs through the commission of various crimes.

Accused accomplices in this criminal enterprise are Radovan Karadzic and other Bosnian-Serb leaders.

Since its inception 16 years ago, the Tribunal has indicted 161 persons for serious violations of humanitarian law committed on the territory of former Yugoslavia between 1991 and 2001.