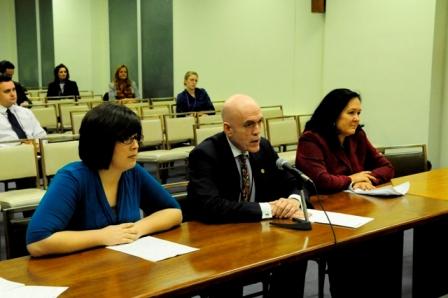 A Resolution has been placed before you to set aside July 11 as the annual day to remember the Srebrenica Genocide and the week of July 11 as the Bosnian and Herzegovinian Tribute week in State of Illinois.

Be it further, we call upon all the citizens of the State of Illinois to work toward ending the cycle of violence and to promote peaceful coexistence among all people on earth.

This is an historical moment and I am honored to have an opportunity to speak for Bosnian American citizens in Illinois that have signed the petition for this Resolution in April last year which is the month that is dedicated to the prevention of genocide that has taken place, and still occurs, in whole world.

This Resolution is in compliance with; the U.S. House Resolution 134 (in 2005) and the U.S. Senate Resolution 199 (in 2005), as well as the International Criminal Court Tribunal established for the former Yugoslavia, the European Parliament Resolution from 2009, and similar Resolutions in the States of Michigan and Missouri. All these Resolutions and their court decisions state that the Srebrenica massacre in which 8, 372 Bosniaks, who were innocent civilians representing three generations of men, were executed by Bosnian Serb forces, as the worst single war crime committed in Europe since World War II.

During the aggression against Bosnia and Herzegovina , which democratically become its own independent state in April 1992 with the endorsement of the U.S. , 200, 000 persons were killed, 40% of 4,600,000 Bosnians were displaced, and one quarter of the total population were forced to leave. Many of the heavily wounded, victims of concentration camps and of rape camps, arrived in the U.S. Among them are my friends, Mrs. Samija Hajdarevic Diab who came with two sons, and Mr. Ferid Sefer, who came with his family. Both are with us in this room.

Illinois is the most welcoming state to our community where more than 50, 000 Bosnians (over 35, 000 in the city of Chicago ) found their new home. Illinois opened its hospitals, Illinois open its schools, and Illinois opened its businesses and community centers for them. Today Bosnians are everywhere in Illinois ; they are factory workers, construction workers, teacher, doctors, lawyers and scientists. They are successful and loyal citizens of the State of Illinois . The state made a difference to thousands and represented hope for a new world view for millions.

I would like to thank you, Mr. Greg Harris and Mr. Harry Osterman, and all of you for your participation in this Resolution that will continue the selfless voice for fairness and justice. I would like to thank you on behalf of my friend, Zuhra Osmanovic, a survivor of Srebrenica genocide. Her husband was killed and her son was taken from her hands that day, on July 11 1995. She has never seen her son since. He was my sonâ€™s age. My son is with us today in this room. She will never forget that moment, but she told me that this Resolution will give her hope that justice and truth will prevail and will prevent future genocide, here or there, or everywhere in the world.

I personally believe that possibility for greater understanding in Bosnia and Herzegovina and throughout the world depends upon our realization that truth and justice are the first steps toward reconciliation. It is also a warning to future generation that this crime should never happen again to any group of people, anywhere or anytime.

Speach Ida Sefer Roche:
Thank you honorable members, for giving me an opportunity to speak today. My name is Ida Sefer Roche and I am here today to voice my support for the Srebrenica Resolution. I was born in Bosnia and lived there until I was eight years old. Like most Bosnian children who have lived through the war I struggled to identify myself, my family and my history.

What did it mean to me that my father was imprisoned in a concentration camp because he was Muslim?

What did it mean to my family that my mother is Serbian Orthodox?

What did it mean to my history that 50,000 women were brutally raped as a tactic of war and that thousands of people were killed?

And that is why I am here today. This resolution gives importance to the experiences of my family and other families alike and to their future here in Illinois. It provides my American husband and myself and opportunity to continue my heritage through our relationship and our children. To my generation this is a validation of our pain, our tears and the journey to our identities. It provides validation to every woman who lost her son, to every daughter who lost her father, to every man who survived and every child who had to watch all that before their eyes.

Genocide is not a problem we can re-label and re-package as a product of war. What happened in Bosnia is a testament of what can happen in the face of fear, greed and hatred. It was not unique. This resolution is important because it acknowledges the people in Illinois who have suffered and still suffer as a result of this act against humanity. Lastly it is important for the next generation, because this history cannot and should not be forgotten.