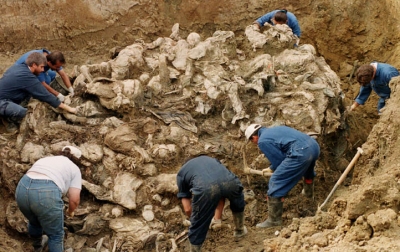 We are writing this letter in regards to the Motion M-416, pending before the Canadian Parliament, which encourages the government of Canada to designate July 11 as Srebrenica Remembrance Day and the week of July 11 as Bosnia and Herzegovina Tribute Week. As you are aware, in less than 40 days, the whole world will mourn the loss of over 8,000 civilians, senselessly killed between July 11 and July 18, 1995, in and around the town of Srebrenica, Bosnia and Herzegovina (BiH).

On July 11, 2010, families and friends of those killed will gather together to mourn the loss of loved ones. The representatives of the United States and European governments will be in attendance in Srebrenica on that day. The U.S. and the EU have both passed the Srebrenica Genocide resolutions and condemned the ethnic cleansing and genocide that took place in BiH during the 1990â€™s.

The Canadian soldiers served as UN peacekeepers during the conflict in BiH and several soldiers gave their lives during the war in BiH. There is also a strong connection between BiH and Canada today because 50,000 Bosniaks consider Canada their new home. Canada had generously accepted many concentration camp survivors, war survivors, orphans and widows. By opening its doors, Canada has helped individuals restore their dignity and has given them a second chance at life.

We ask for your support of Motion M-416, originally introduced by Member of Parliament, Mr. Brian Masse. Furthermore, we ask that this Motion is passed in its latest negotiated version and that July 11 is proclaimed Srebrenica Remembrance Day before the 15th anniversary of the genocide in Srebrenica.

It is our sincere hope that Canada will have its government representative in Srebrenica on July 11, 2010. Most Bosniak-Canadians are carrying physical and emotional scars from this genocide, and having a Srebrenica Remembrance day will help ease those scars and honor the victims.

We thank you for your consideration and look forward to your response.