The President of Bosnia Haris SilajdÅ¾iÄ‡, had strong words for the United Nations at the 63rd opening of the UN General Assembly yesterday, stating the UN bore part of the responsibility for the genocide committed by the genocidal Serbian fascist aggressor,during the 1992-1995 Serbian aggression against Bosnia. 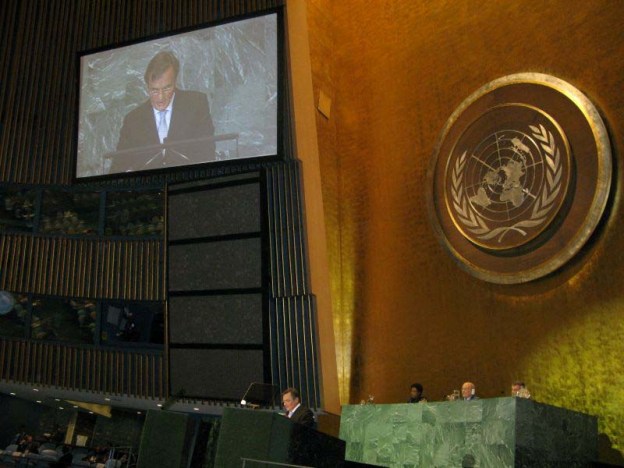 “Through its acts and omissions, the United Nations, by its own admission, bears a part of the responsibility for the crimes committed at Srebrenica,” said President SilajdÅ¾iÄ‡.

â€œWe do not want the United Nations to be haunted,â€ he told world leaders gathered at UN Headquarters in New York. â€œThis Organizationâ€™s credibility is too important to the world to carry the burden of this failure.â€

Rather, the world body must ensure that mistakes are not repeated and that past errors are corrected, President SilajdÅ¾iÄ‡ stressed.

â€œWe cannot bring back the dead, but we can give dignity and justice to the genocide survivors,â€ he said. â€œWhat we say today is not aimed at the past, but at the future, and not only for Bosnia.â€

Despite the positive results delivered by the 1995 Dayton Peace Agreement, many key issues remain, including the blocking of â€˜minorityâ€™ returns by the genocidal Serbian fascist creature in Bosnia “RS”, “by either directly taking part in violence or by not protecting people from attacks due to their ethnic background,” the Bosnian President said.

â€œDayton never intended such ethnic apartheid to take root in Bosnia,â€ he declared.

President SilajdÅ¾iÄ‡ also praised a new indictment that UN prosecutors have filed against the former leader and creator of the genocidal Serbian fascist creature in Bosnia “RS” and one of the masterminds of the genocide against the Bosnian people,Serbian war criminal Radovan Karadzic in a move to speed up his trial.

It includes two genocide charges referring to the 1992 campaign of “ethnic cleansing” against Bosnian civilians and the 1995 Srebrenica massacre of some 10,000 Bosnian civilians by the genocidal Serbian fascist aggression.

The Bosnian President Haris SilajdÅ¾iÄ‡ said the updated indictment would “further implicate” the regime of former Yugoslavian President,Serbian war criminal Slobodan Milosevic in the “planning and the commission of these crimes”.

The court is under pressure from the United Nations to finish all its cases by 2010.

Here is the complete speech by the Bosnian President Haris SilajdÅ¾iÄ‡ on 63th General Assembly of the United Nations (September 23,2008):

The first time I stood at this podium was in May 1992, as the Foreign Minister of a newly-independent Bosnia and Herzegovina. At that time, I recounted the unspeakable atrocities that were unfolding in my country. I also warned that, if not stopped, such atrocities would only get worse. In fact, I merely asked that Bosnia and Herzegovina be afforded the right to defend itself, the right guaranteed by the UN Charter.

We know what has happened since. Some in the international community insisted on maintaining the arms embargo imposed by the UN Security Council in 1991, thus adding to the obviously overwhelming military advantage of Milosevicâ€™s regime that was bent on destroying Bosnia and its people. They justified this course by claiming that the lifting of the embargo would add oil to the fire. The result, inevitably, was quelling that fire with the blood of the innocent.

According to the ICRC data, 200,000 people were killed, 12,000 of them children, up to 50,000 women were raped, and 2.2 million were forced to flee their homes. This was a veritable genocide and sociocide. The intent of the perpetrators of this genocide was to forever destroy the unique multi-ethnic fabric of Bosnia and Herzegovina through mass slaughter, rapes, torture, abuse, expulsion and plunder. Despite of this, defenders of our country conducted themselves honorably, as demonstrated by the ICTY acquittals of most of Bosnia and Herzegovinaâ€™s military leadership.

All this culminated in Srebrenica in July, 1995. The International Court of Justice, in its Judgment of February 26, 2007, ruled that

â€œ[T]he Bosnian Serbs devised and implemented a plan to execute as many as possible of the military aged Bosnian Muslim men present in the enclaveâ€¦, that the acts committed at Srebrenicaâ€¦were committed with the specific intent to destroy in part the group of the Muslims of Bosnia and Herzegovina as such; and accordingly that these were acts of genocide, committed by members of the [Army of Republika Srpska] in and around Srebrenica from about 13 July 1995.â€

Through its acts and omissions, the United Nations, by its own admission, bears a part of responsibility for the crimes committed at Srebrenica. In fact, the UN Secretary-Generalâ€™s Report on Srebrenica from 2000 unequivocally states:

â€œThrough error, misjudgment and an inability to recognize the scope of the evil confronting us, we failed to do our part to help save the people of Srebrenica from the Serb campaign of mass murderâ€¦Srebrenica crystallized a truth understood only too late by the United Nations and the world at large: that Bosnia was as much a moral cause as a military conflict. The tragedy of Srebrenica will haunt our history forever.â€

We do not want the United Nations to be haunted. This organizationâ€™s credibility is too important to the world to carry the burden of this failure. Errors can be committed, but errors must not be repeated. We want the UN to right the wrongs. In fact, international law mandates that this must be done. Namely, the International Law Commissionâ€™s Articles on State Responsibility, adopted in this Assemblyâ€™s Resolution 56/83 of 12 December 2001, mandate that: â€œno State shall recognize as lawful a situation created by a serious breach of a [peremptory norm of general international law],â€ which clearly includes the crime of genocide and the crimes against humanity, â€œnor render aid or assistance in maintaining that situation.â€

If these principles had been applied, would the institutions identified by the ICJ as perpetrators of genocide still exist? Would vast portions of a country remain ethnically clean? Would over 1 million of refugees and displaced persons remain outside their homes? In short, do these principles allow for the arrest of Karadzic and the simultaneous preservation of the results of his project?

We cannot bring back the dead, but we can give dignity and justice to the survivors. What we say today is not aimed at the past, but at the future, and not only for Bosnia and Herzegovina. We owe it not only to the victims and survivors, but to the humanity as a whole. The message to the would-be perpetrators of crimes in the name of a twisted ideology should be crystal clear: do not even think about it, your terror will not pay off.

In Bosnia and Herzegovina, we had the opportunity to make that true by a consistent implementation of the 1995 Dayton Peace Agreement, which ended the aggression, stopped the genocide, and brought peace. These were its major accomplishments, and their value cannot be overemphasized.

Dayton, however, was also intended to reverse the effects of genocide and ethnic cleansing. It had all the necessary elements to do so. Instead, in the words of the Constitutional Court of Bosnia and Herzegovina, its main provisions have been a victim of: â€œa systemic, continuing and deliberate practice of the public authorities of Republika Srpska with the goal of preventing the so-called â€˜minorityâ€™ returns, either through direct participation in violent incidents or through the abdication of responsibility to protect the people fromâ€¦violent attacks due solely to their ethnic background.â€

Dayton never intended such ethnic apartheid to take root in Bosnia and Herzegovina. It is not the implementation of Dayton, but the violation of its core principles, that led to this result. It would be a grave mistake to recognize this result as lawful and legitimate.

Now is the time to right these wrongs. We are about to start work on the new Constitution of Bosnia and Herzegovina, and the outcome of that process will answer many of these questions.

To those who now seek to legitimize the systemic violations of the Dayton Agreement, we all must say: make no mistake, genocide will not be rewarded.

Rewarding genocide could send a dangerous message throughout the world, and would surely undermine the chances for permanent peace and stability in both Bosnia and Herzegovina and the region. Seekers of justice are not the enemies of peace. They are the guardians of peace.

Certainly, there are those in Bosnia and Herzegovina who would not agree with this, but they are surely not the victims of genocide.

We have not forgotten the help we received from many of the countries represented here today. A number of your soldiers, diplomats, aid workers and journalists died in Bosnia and Herzegovina while working to end the aggression, bring peace, ease the suffering, or to make sure the rest of the world knew about it. For that we thank them once again, and renew our sympathies to their families. An even greater number of countries have assisted us in rebuilding our society after the aggression, and we extend our heartfelt gratitude for that as well. Bosnia and Herzegovina still needs your help in this regard, and we hope that we can work together in order to ensure permanent peace and stability in my country.”