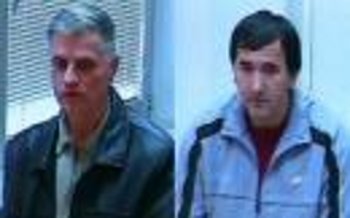 A Prosecution witness alleges that the two indictees participated in preparing and guarding the premises in Pilica where Bosniaks from Srebrenica were detained in July 1995.

Rajko Babic, a former general affairs officer with the First Battalion of the Zvornik Brigade of the Republika Srpska Army, VRS, spoke about the role of the two indictees in “preparing and guarding” the premises in the school building in Pilica where a large number of captured Srebrenica residents were held in July 1995.

The State Prosecution charges Momir Pelemis, Deputy Commander of the First Battalion with the Zvornik VRS Brigade, and Slavko Peric, Assistant Commander for Security with the same Brigade, with having “planned, ordered and helped” others commit the murder of about 1,200 men from Srebrenica, who were detained in the “Kula” school building in Pilica, and about 600 men who were held in Pilica Center in Zvornik Municipality, on July 15 and 16, 1995.

As alleged by witness Babic, upon his arrival at the First Battalion Staff on July 14, 1995, he found out that “a group of about 150 or 200 captured Muslims” would be brought to the school building in Pilica, while “the Staff had the task of preparing everything for their accommodation and informing the local population of what was going on so that they would not panic”.

“We received this order from Pelemis, because our commander was absent. Me and this boy named Gavric, who worked as morale officer, and Slavko Peric headed towards the school building in order to see what was going on. We agreed that Peric would be responsible for it, because he was in charge of security,” the witness said, adding that about ten VRS soldiers went to the school building on this occasion.

Shortly after their arrival, a large group of civilians arrived. Their hands were tied behind their backs. Some “unknown soldiers” escorted them to the hall.

“The hall was half full, but I do not know how many people there were in it. It was 32 degrees outside. One could hardly breathe in the hall, because there were no windows. How did they look? … Well, it all looked so sad. There were these captured men. The room smelled badly,” Babic said.

He added that in order to make it somewhat easier for the detainees they brought a 200-liter cistern into the room and filled it with water. They were allowed to “go to the toilet or to the corridor, where it was a bit cooler”.

“One civilian went out to take some water. When they brought him back we saw that he was wounded. I asked what had happened. It seems that he tried to flee. One of those unknown soldiers shot him on the leg. He was brought back and I did not see him any more,” the witness said.

As alleged by this witness, in order to make their lives easier, the detainees were transferred to the classrooms on the first floor the same night. Indictee Peric went “to the Zvornik brigade Staff in order to enquire about the fate of the Muslims”.

“Peric came back and told us that no help was coming. I think that I met a senior military officer in the school yard the following day. He was a big dark balding man. I asked him what would happen to those people, but he got mad and said that they had to be taken away. He then told me that he thought that our Battalion would kill them. I was shocked when I heard him say that. He then got mad again, telling me that we were a battalion of village people, not real soldiers. He said we should be ashamed,” the witness explained.

Babic told the Court that he did not visit the school building on July 16, 1995, adding that he was “in my apartment, overlooking the school yard”. He said that he saw “a bus coming and Muslims loading onto it” later that day.

“I saw some soldiers, members of our Battalion. They were just standing there watching this. The Muslims came to the buses. Then they tied each other’s hands behind their backs and blindfolded each other. Then they entered the buses,” Babic said, adding that he did not know what happened to them.

The next hearing is due to take place on April 29, 2009, when this witness will be cross-examined.