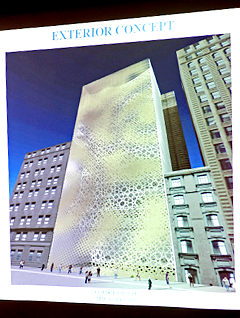 A proposal to build a mosque steps from Ground Zero received the support of a downtown committee despite some loved ones of 9/11 victims finding it offensive.

The 13-story mosque and Islamic cultural center was unanimously endorsed by the 12-member Community Board 1’s financial district committee.

The $100 million project, called the Cordoba House, is proposed for the old Burlington Coat Factory building at Park Place and Broadway, just two blocks from the World Trade Center site.

“I think it will be a wonderful asset to the community,” said committee Chairman Ro Sheffe.

Imam Feisel Abdul Rauf, who helped found the Cordoba Initiative following the 9/11 attacks, said the project is intended to foster better relations between the West and Muslims.

He said the glass-and-steel building would include a 500-seat performing arts venue, a swimming pool and a basketball court. “There’s nothing like it,” said Rauf, adding that facilities will be open to all New Yorkers.

Daisy Khan, executive director of the American Society for Muslim Advancement and Cordoba Initiative board member, said the project has received little opposition.

“Whatever concerns anybody has, we have to make sure to educate them that we are an asset to the community,” Khan said.

Khan said her group hopes construction on the project will begin by the 10th anniversary of the 9/11 attacks.

No one at last night’s meeting protested the project. But some 9/11 families said they found the proposal offensive because the terrorists who launched the attacks were Muslim.

“I realize it’s not all of them, but I don’t want to have to go down to a memorial where my son died on 9/11 and look at a mosque,” said retired FDNY Deputy Chief Jim Riches – whose son Jim, a firefighter, was killed on 9/11.

“If you ask me, it’s a religion of hate,” said Riches, who did not attend last night’s meeting.

Rosemary Cain of Massapequa, L.I., whose son, Firefighter George Cain, 35, was killed in the 2001 attacks, called the project a “slap in the face.”

“I think it’s despicable. That’s sacred ground,” said Cain, who also did not attend the meeting.

“How could anybody give them permission to build a mosque there? It tarnishes the area.”

Correction. An earlier version of this story incorrectly identified the Cordoba Initiativeâ€™s funders as well as Daisy Kahnâ€™s title; she is not the Initiativeâ€™s executive director. The News regrets the errors.