A confident, folksy, smiling Sarah Palin went toe-to-toe with a restrained Joe Biden Thursday night in a spirited, yet polite debate between the 2008 vice-presidential candidates, covering topics ranging from the current economic crisis to where the central war on terror is located.
Struggling to revive the campaign of Republican nominee John McCain, Palin showed she was conversant on subjects that are close to her heart such as energy independence as well as those that have seemed foreign, such as the war on terror. The Republican ticket has struggled amid a crumbling economy and a number of gaffes Palin has committed during infrequent press interviews in which her knowledge was questioned.

When the dust settled, it appeared that Palin, the governor of Alaska, held her ground against Biden, the veteran senator from Delaware and running mate of Sen. Barack Obama, choosing to speak directly to the camera and the public by extension, rather than to her opponent or the moderator, PBS anchor Gwen Ifill.
At times, Palin even avoided answering some of Ifill’s questions, at one point sticking to a discussion on tax increases instead of responding to queries about health care. She remained focused on the camera throughout the 90-minute debate, glancing occasionally at Biden or Ifill.
“I may not answer the questions that either the moderator or you want to hear,” Palin said to Biden onstage at Washington University in St. Louis, “but I’m going to talk straight to the American people.”
The tactic seemed to work, as pundits congratulated Palin on avoiding the kinds of gaffes that had plagued her in recent interviews, and returning to the persona that captivated the Republican Convention.

Poll results
Instant polls from CNN showed an overwhelming number of viewers, 85%, thought Palin did better than expected.
But a CBS News/Knowledge Networks poll released by the Obama campaign said 46% of uncommitted voters thought Biden won the contest, while 21% gave the nod to Palin. Another 33% thought it was a draw. CNN, meanwhile, reported that 51% of voters thought Biden won the debate while 35% gave it to Palin.
Another poll from HCD Research said 69% of independent voters gave the nod to Biden while 31% though Palin won. 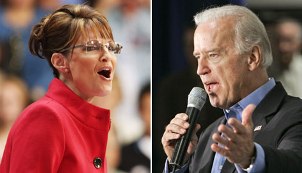 Biden, meanwhile, avoided being condescending to Palin, frequently smiling at his opponent and directing his attacks toward McCain and defending Obama.
Biden won praise for his knowledge of the issues, but he also duplicated some of the folksiness that Palin employed. He recalled a recent encounter at a gas station near his home in Wilmington, Del.
“I said, ‘Joey, how much did it cost to fill your tank?’ You know what his answer was? He said ‘I don’t know, Joe. I never have enough money to do it.’ The middle class needs relief, tax relief,” Biden said.
The two candidates had spirited exchanges as they stuck to their respective party lines when it came to such issues as the economy and taxes. Palin went on the offensive against Biden a few times.
She accused Biden of flip-flopping on the Iraq war at one point, offering to support the troops’ effort and now converting to Obama’s plan to pull out troops within two years.
“You’re one who says, as so many politicians do, I was for it before I was against it or vice- versa. Americans are craving that straight talk and just want to know, hey, if you voted for it, tell us why you voted for it and it was a war resolution,”
Palin said.

The senator, meanwhile, preferred a more subtle approach. On health care, Biden pilloried McCain’s plans for a $5,000 tax credit for families to purchase coverage. He said, though, that taxpayers will have to replace their $12,000 plans with a $5,000 and many more will drop off the rolls of the insured.
“I call that the ‘Ultimate Bridge to Nowhere,'” he said, referring to the controversial Alaskan bridge that Palin once backed but later withdrew her support for.

Iraq debate
Palin accused Biden of not being forward-looking enough when it came to handling the war in Iraq.
“There have been huge blunders in the war. There have been huge blunders throughout this administration, as there are with every administration,” Palin said. “But for a ticket that wants to talk about change and looking into the future, there’s just too much finger-pointing backwards to ever make us believe that that’s where you’re going.”
Biden responded by saying: “The issue is, how different is John McCain’s policy going to be than George Bush’s? I haven’t heard anything yet.”
“It may be. But so far, it is the same as George Bush’s. And you know where that policy has taken us,” he said. “We will make significant change so, once again, we’re the most respected nation in the world. That’s what we’re going to do.”
Ultimately, though, it may be the personalities that determine the winner in the debate – and who could be more folksy in their calls for change in Washington.
With a number of “gosh darns” and “doggone its” in Palin’s vernacular, she seemed to win the folksy front. At one point she gave a “shout out” to a third-grade class, adding they would get extra credit for watching the debate.
“I think we need a little bit of reality from Wasilla Main Street there, brought to Washington, D.C.,” Palin said, “so that people there can understand how the average working class family is viewing bureaucracy in the federal government and Congress and inaction of Congress.”
But Biden, who got emotional at one point over the death of his first wife in 1972 as he was about to be sworn in as a senator, tried to keep up.
“Look, all you have to do is go down Union Street with me in Wilmington or go to Katie’s Restaurant or walk into Home Depot with me where I spend a lot of time and you ask anybody in there whether or not the economic and foreign policy of this administration has made them better off in the last eight years,” Biden countered.

Russ Britt is the Los Angeles bureau chief for MarketWatch.