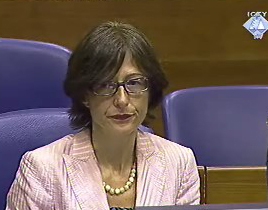 The trial of Florence Hartmann, former spokesperson of the Hague Prosecution, starts at The Hague, before the International Criminal Tribunal for the former Yugoslavia, ICTY.

On the first day of the trial of Florence Hartmann, Bruce A. MacFarlane, amicus curiae of the Hague Tribunal, questioned two witnesses and presented documents, seeking to prove that the indictee intentionally presented confidential information in public.

In his introductory arguments, Defence attorney Karim A.A. Khan denied the allegations in the indictment, claiming that the information disclosed by the former Prosecution spokesperson in her book had already been disclosed by the Tribunal. He alleged that the same information was also mentioned in the New York Times, the International Herald Tribune and an IWPR study, but nobody was tried because of that.

“It is clear that we are talking about a public secret,” Khan said.

In August 2008 the ICTY indicted Hartmann for contempt of Court because she had allegedly disclosed confidential data pertaining to the Appellate Chamber’s decisions in the case of Slobodan Milosevic in her book “Peace and Punishment”, published in 2007, and in an article on “Hidden Key Documents on Genocide” of 2008.

Slobodan Milosevic was indicted for war crimes committed in the former Yugoslavia but died in the Detention Unit in Scheveningen before the trial was completed.

The Chamber of the ICTY issued “an order in lieu of the indictment” against Hartmann, former spokesperson of the Hague Prosecution, on contempt of court. The order has the same connotations as an indictment, except for the fact that it was issued by the Court.

MacFarlane examined Yoriko Karmarek as his first witness. The witness works for the French publishing house Flamarion, which published the “Peace and Punishment” book. Karmarek confirmed that 3,799 copies of the book were sold in France, adding that the book was still on the market as nobody had ever tried to withdraw it from bookstores.

Karmarek said that they decided to publish the book because its content was “in the public interest as there was an ongoing debate on the role of the Tribunal in the events that took place in the former Yugoslavia”.

The Defence announced that it would examine three witnesses, including Natasa Kandic, Director of the Fund for Humanitarian Law from Belgrade, and Nura Alispahic, of the Association of the Mothers of Srebrenica. Hartmann will not testify in her own defence.

Just before the trial, the documents for which Hartmann is being tried were sent from an unknown e-mail address to several thousand e-mail addresses all over the world.

In her book Hartmann alleged that, by rendering those decision, the ICTY judges participated in absconding key documents on the involvement of the Socialist Republic of Yugoslavia in the genocide in Srebrenica, because it refused to lift the confidential mark from the notes of the Supreme Defence Council, submitted by the Belgrade authorities to the ICTY at the trial of Milosevic.

As of 2000 Florence Hartmann was the spokesperson of Carla Del Ponte, former Chief ICTY Prosecutor. She quit her function six years later, and then published “Peace and Punishment”.

Contempt of court may be punished by up to seven years’ imprisonment, a fine of up to Euro 100,000 or both.