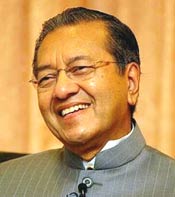 I did not vote for you in the Presidential Election because I am Malaysian.

But I consider myself one of your constituents because what you do or say will affect me and my country as well.

I welcome your promise for change. Certainly your country, the United States of America needs a lot of changes.

That is because America and Americans have become the most hated people in the world. Even Europeans dislike your arrogance. Yet you were once admired and liked because you freed a lot of countries from conquest and subjugation.

It is the custom on New Year’s day for people to make resolutions. You must have listed your good resolutions already. But may I politely suggest that you also resolve to do the following in pursuit of Change.

1) Stop killing people. The United States is too fond of killing people in order to achieve its objectives. You call it war, but today’s wars are not about professional soldiers fighting and killing each other. It is about killing people, ordinary innocent people by the hundreds of thousands. Whole countries will be devastated.

War is primitive, the cavemen’s way of dealing with a problem. Stop your arms build up and your planning for future wars.

2) Stop indiscriminate support of Israeli killers with your money and your weapons. The planes and the bombs killing the people of Gaza are from you.

3) Stop applying sanctions against countries which cannot do the same against you.

In Iraq your sanctions killed 500,000 children through depriving them of medicine and food. Others were born deformed.

What have you achieved with this cruelty? Nothing except the hatred of the victims and right-thinking people.

5) Stop your arms manufacturers from producing them. Stop your sales of arms to the world. It is blood money that you earn. It is un-Christian.

6) Stop trying to democratize all the countries of the world. Democracy may work for the United States but it does not always work for other countries.

Don’t kill people because they are not democratic. Your crusade to democratize countries has killed more people than the authoritarian Governments which you overthrew. And you have not succeeded anyway.

Regulate and supervise your banks. Jail the miscreants who made profits from abusing the system.

9) Show respect for the United Nations.

I have many other resolutions for change which I think you should consider and undertake.

But I think you have enough on your plate for this 2009th year of the Christian Era.

If you can do only a few of what I suggest, you will be remembered by the world as a great leader. Then the United States will again be the most admired nation. Your embassies will be able to take down the high fences and razor-wire coils that surround them.

May I wish you a Happy New Year and a great Presidency.