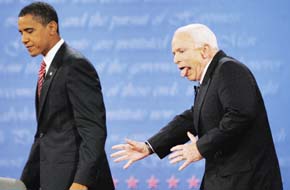 John McCain and Barack Obama battled over the best way to aid struggling U.S. workers in a tense debate that highlighted a big gap in their economic approaches.

With Americans reeling under what Obama called the worst crisis since the Great Depression, the rivals in the November 4 election differed frequently and showed occasional flashes of the rancor that marked their recent rhetoric on the campaign trail.

With Americans reeling under what Obama called the worst crisis since the Great Depression, the rivals in the November 4 election differed frequently and showed occasional flashes of the rancor that marked their recent rhetoric on the campaign trail.

“Americans are angry, they’re upset and they’re a little fearful,” McCain said in the second of three presidential debates, at Belmont University in Nashville, Tennessee. “We don’t have trust and confidence in our institutions.”

The Arizona senator, who has been criticized as unresponsive on economic issues, was under pressure to turn in a strong performance that would stop his slide in the polls and halt Obama’s surge during the economic crisis.

Two quick polls taken immediately after the debate, by CBS News and CNN, both judged Obama the winner.

McCain could be running out of chances to recast the race. With only four weeks to go until the election, the two candidates will meet for one final debate on October 15.

A Reuters/C-SPAN/Zogby poll of likely voters released on Wednesday showed Obama with a 47 percent to 45 percent edge on McCain, down one point overnight and within the poll’s margin of error of 2.8 percentage points.

During the debate, McCain proposed a program that would buy mortgages from homeowners facing financial problems and replace those mortgages with new, fixed-rate mortgages. His campaign said it would cost roughly USD 300bn.

Obama said McCain and Republicans had supported the deregulation of the financial industry that led to the crisis. He said middle-class workers, not just Wall Street, needed a rescue package that would include tax cuts.

“We are in the worst financial crisis since the Great Depression, and a lot of you, I think, are worried about your jobs, your pensions, your retirement accounts,” he said.

The debate broke little new ground and featured familiar themes for both candidates. McCain portrayed Obama as an eager supporter of higher taxes who was unwilling to buck his own party, but Obama said McCain’s policies would help the wealthy and strand workers at the bottom of the economic ladder.

Energy independence
Both candidates vowed to focus on making the United States energy independent. McCain said nuclear power was a clean source of energy that would be key to battling climate change and mocked Obama.

“Senator Obama says that it has to be safe or disposable or something like that,” he said. Obama said he approved of nuclear power as one element of a broader energy plan.

Obama has solidified his national lead in polls and gained an edge in crucial battleground states in recent weeks as the Wall Street crisis focused attention on the economy, an area where polls show voters prefer the Illinois senator’s leadership.

Asked about a possible Treasury secretary in their administrations, both candidates mentioned Omaha’s legendary investor Warren Buffett, a supporter of Obama.

Foreign policy was the topic in the final third of the debate, and the two candidates clashed sharply over the Iraq war. Obama was an early critic of the war, while McCain has been a staunch supporter and urged the “surge” strategy to increase U.S. troops.

“Senator Obama would have brought our troops home in defeat. I will bring them home in victory and in honor,” McCain said.

Obama said the focus on Iraq had distracted the United States from the threat in Afghanistan, and he defended his willingness to strike against terrorists in Pakistan without approval from Islamabad despite McCain’s criticism.

“We have fundamental differences about the use of military power,” McCain said.

McCain said Russia may be an “evil empire,” the term applied to the old Soviet Union by President Ronald Reagan, while Obama said it had engaged in some evil behavior and “they still have nationalist impulses that I think are very dangerous.”

The debate was conducted in a looser town hall format where questions were asked by the audience — a favorite setting for McCain and a staple of his campaigns in the battle for the party nomination this year and in 2000.