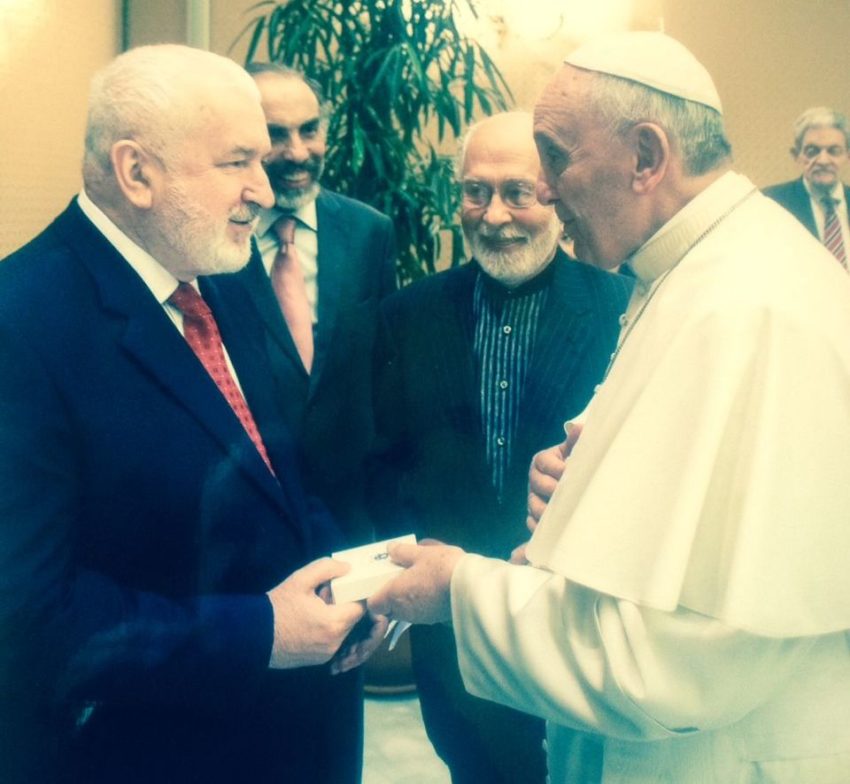 Your Holiness,
May peace be with you!

I am writing You in the Holy Month of Ramadan from the Holy City of Sarajevo, counting on Your Holy modesty, openness and accessibility to the common man.

I am glad that Your and the spirit of Sheikh Al-Azhar Ahmad Tayyib will illuminate in this Ramadan the darkened planet Earth from Coronavirus with a common prayer on Thursday, May 14th. The whole world will rejoice in this historic act of spirituality, as it rejoiced in your historic meeting in February last year in Abu Dhabi, where on behalf of Muslims and Catholics you took a vow before God Almighty and the noble world to human fraternity in faith and love. I am happy to have had the honor of attending personally this historic act in Abu Dhabi, just as I am happy to participate personally in the announced global prayer with Bosnian prayer: Merciful God, if we err, grant us the power of Adam’s (a.s.) repentance; if misfortune befalls us, teach us Noah’s (a.s.) Ark of salvation; if we are offered hatred, save us with the love of Isa (a.s.); if persecution happens to us, empower us with Muhammad’s (a.s.) patience and faith in return!

Your Holiness, convinced of Your sincere devotion to the human fraternity in faith and love, which you have shown us flawlessly during Your historic visit to Sarajevo., I feel free to tell You honestly as well that the announced Mass for Bleiburg in Sarajevo Cathedral on May 16, two days after common global prayers, is neither in the letter nor in the spirit of the vows of human fraternity. No one in this world, like the people of Sarajevo, has compassion for all the victims of terror. But also, no one in this world as the people of Sarajevo is hypersensitive to anything reminiscent of the horrors of fascism, to anything that opens and not closes the wounds of the Holocaust and to anything that has the mark of revising history in a way that equates victims and their perpetrators.  On the day of the centenary of the First World War, in Trieste in 2014, You received the “Srebrenica Flower” as a reminder of the Genocide in Bosnia and thus You expressed Your solidarity with all the victims of crimes against humanity.

Your Holiness, You, like no Pope – Bishop of Rome, have so far kissed the hands of the leaders of the Jewish Community and thus sent a message to all cardinals, bishops, priests and believers that the crime of the Holocaust should not be belittled or relativized, nor should this evil ever happen again. – “Never again”. With that in mind, it is not appropriate for anyone anywhere to spoil Your legacy of the goodwill.  Unfortunately, the announced Mass for Bleiburg spoils Your legacy, especially in Sarajevo – European Jerusalem.

Therefore, I feel my moral obligation to kindly ask You in the spirit of the human fraternity of Muslims and Catholics to use Your goodwill and spiritual authority to have the Archbishop of Vrhbosna Cardinal Vinko Puljic give up holding Holy Mass for Bleiburg in Sarajevo Cathedral as an act of goodwill and sympathy for the victims of fascism, the victims who are now upset. Sarajevo, which survived one of the longest sieges of the city in history, deserves peace in the souls of its citizens, peace that is disturbed right now by this act. The people of Sarajevo do not understand why it is necessary to open the Pandora box of the World War II, from which the images of the crime are emerging? Nobody needs that, least of all those who claim to have a mission to spread love and goodwill among people and nations.

I am sure that the common global prayer in Holy Ramadan will unite the hearts of people in goodness and love!

I am convinced that Your word of peace and good for Sarajevo will resonate!

Ending this letter, I call to witness my heart and my mind that my intention to spread the good is sincere and that my faith and love in human fraternity are pure, as is the pure Bosnian spirit from Kulin Ban to the present day!