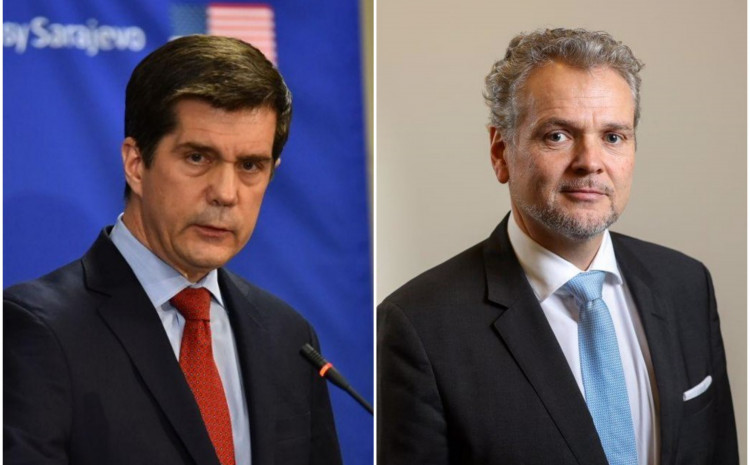 Today, 25 years after the signing of the General Framework Agreement for Peace in Bosnia and Herzegovina, we remember more than 100,000 citizens who were killed in the conflict, tens of thousands who went missing, and millions who were uprooted from their homes. The long shadow of that trauma touches lives in this country today, and none of us will ever forget that.

But just as the trauma casts a shadow, so the hopes of BiH citizens illuminate the path ahead. It is a path through which Bosnia and Herzegovina can become a prosperous and sovereign democracy fully integrated in the rest of Europe. It is a path towards a country in which citizens can live a decent and dignified life with efficient public services and with the security that comes from the proper application of the rule of law.

So, as we look back over the last quarter of a century, let us also look forward. In the next phase, the people of this country can be sure of the practical and political support of the European Union and the United States. We are determined to continue assisting the strategic transition from post-conflict recovery to the steady development of a normal democracy.

For this transition to be achieved, there will have to be major changes. These include credible measures to tackle organized crime and political and administrative corruption, and progress on targeted constitutional reforms that will make the country more functional and that will protect citizens’ rights.

We believe that a significant start on this agenda can be made in 2021.

At the beginning of December, the European Commission and the High Representative for Foreign Affairs and Security Policy published a proposal for joint action with the incoming US administration. This envisages a coordinated effort to seize the ‘once-in-a-generation opportunity’ for positive change that will be created by the post-pandemic recovery. Among other things, the proposal calls for a renewal of the EU-US commitment – based on joint core values – to supporting democracy around the world. This means standing together to fight corruption, authoritarianism and human rights abuses.

Strong EU-US partnership is also essential in Bosnia and Herzegovina in order to support reconciliation, improve governance and push key reforms forward, including BiH’s Reform Program with NATO, which complements EU reform goals. Both EU member states and NATO Allies support local efforts aimed at delivering on the stability and prosperity that the transatlantic community offers to BiH citizens .

There is no disagreement in this country that radical change is needed. Nor is there disagreement that the blueprint for change has already been laid out in the detailed steps of the European integration process – a process that is consistently supported by upwards of 80 percent of the population. We also agree that there is no place in this country for artificial divisions and it is clear that only BiH as a single country can advance on the path to Brussels.

European integration can help this country to resolve the anomalies of the Dayton system. It is based on the rights and responsibilities of individual citizens. The EU champions social, cultural and religious diversity, but it does not allow diversity to compromise or dilute the rights of each citizen.

We believe that integration can help to implement the will for change that is constantly and overwhelmingly expressed by the citizens of Bosnia and Herzegovina. This will for change can prevail over the self-interest that is displayed, often quite shamelessly, by some BiH politicians. This new dynamic can be understood as intervention from inside the country, intervention by the people on their own behalf. It is a popular intervention that we fully support.

In 2021, amid the changing configurations of the post-corona world, we will work with our BiH civil society partners and political partners to ensure that a new phase in Bosnia and Herzegovina’s progress can get underway. We will support a faster transition from Dayton to Brussels, from the post-conflict phase to the EU accession phase, from a period of stagnation to a period of development as a prosperous and sovereign democracy.

We believe this can truly help Bosnia and Herzegovina to move from beneath the long shadow of the conflict that ended a generation ago. (Copy paste from avaz.ba)