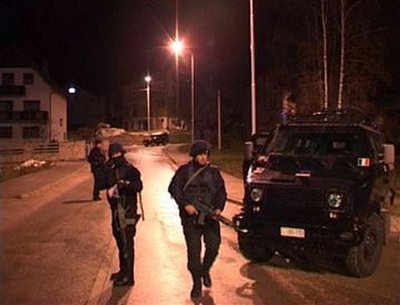 NATO spokesman Derek Chappell said family members were questioned at their home in Pale, near the Bosnian capital Sarajevo. Soldiers were seen carrying out suitcases and boxes from the house. Serbian war criminal Radovan Karadzic’s wife and daughter were among those at home.

Former fascist leader of the Serbians living in Bosnia Radovan Karadzic has been in the custody of the U.N. war crimes tribunal in The Hague since July.

“The purpose of (the) operation is to search for information, evidence about this connection,” he said, adding that the investigators were “pleased with the result.”

The house of Serbian war criminal Radovan Karadzic’s wife was frequently raided over the course of a decade while Serbian fascist was still hiding from justice. It was believed that a support network that included his family financed and facilitated his years of hiding. He was finally arrested in Belgrade, where he lived under a false identity and practiced “alternative medicine”.

Serbian war criminal Radovan Karadzic (who is originally from Montenegro) was arrested in July this year after 13 years of hiding from justice. The Prosecution at The Hague considers him guilty of genocide, expulsions, deportation, and inhumane acts against Bosnian civilians committed during the 1992-1995 Serbian aggression against Bosnia.