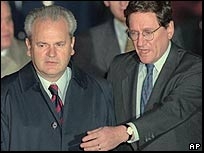 SARAJEVO – Twelve years ago, the guns in Bosnia fell silent after a war that killed at least 100,000 people and left more than 2 million homeless. Since then, the 1995 Dayton Peace Agreement has often been suggested as a model for other peace efforts in countries with deep ethnic or religious differences. Bosnia’s “federalism” structure has been cited, especially by Sen. Joe Biden and former Council on Foreign Relations president Les Gelb, as a possible model for Iraq.
But the world has more or less turned its back on Bosnia itself. I returned to see how things were going. What I found has relevance to many other areas, including Iraq.

The core objective.
Grade: A+

There were more than 30 failed cease-fires before Dayton. Our primary goal was to end the war — once and for all. Twelve years later, that objective has been fully achieved, at a cost of zero American and NATO lives.
Al-Qaeda.
Grade: A

We were concerned with the presence in Bosnia of a little-known group of Islamist extremists who would later become infamous as al-Qaeda. In the Dayton Agreement, we required their removal and gave NATO the right to attack them. Without Dayton, al-Qaeda would probably have planned the Sept. 11 attacks from Bosnia, not Afghanistan.

Because of arguments within NATO, Dayton left a single country with three armies. This was obviously untenable. But thanks to a tenacious follow-up effort, there is now a single command structure and a single state army, built along NATO lines, where once there were three warring factions. A work in progress, but the progress here is real.

As we negotiated, it was widely predicted that the Serb and Muslim-Croat entities would remain physically divided and that the country would be partitioned. NATO expected its troops to patrol a demilitarized separation line, as in Korea. None of this happened. You can drive without interference from one end of Bosnia to the other, and the once ubiquitous checkpoints are gone.
Economic integration.

There is a single currency and plenty of commercial transactions between ethnic groups. Trouble is, corruption is deeply embedded in both parts of Bosnia, with many politicians masquerading as nationalists in order to maintain control of state-owned enterprises.

Bosnia, like its Balkan neighbors, has no viable future except as a member of the European Union. Since the failure of the reform package offered by the “high representative,” Lord Paddy Ashdown, nothing had moved — until this month, when the Bosnians approved a limited police reform agreement. This clears the way for Bosnia to sign a Stabilization and Association Agreement, a significant step toward E.U. membership. This is the best political news in a long time.

Until April 2006, slow but steady progress had been made. Ashdown, who held the powerful international overseer position established by Dayton, was pushing reform. He produced a constitutional reform package that would have strengthened the state’s central institutions while leaving plenty of power in the hands of the entities. But Ashdown fell two votes short of the needed two-thirds majority in the National Assembly when Haris Silajdzic, the wartime Muslim prime minister who had returned to power as one of the three presidents of Bosnia, opposed the package, claiming it would strengthen the Serbs. Since that setback, there has been no significant political progress. The president of the Serb portion of Bosnia, Milorad Dodik, supported Ashdown’s plan, but then he turned away from reform, looking to Belgrade and Moscow for support. He now seeks to weaken or paralyze the central government at almost every turn. The interaction between Silajdzic and Dodik has been poisonous, with the Muslim talking about abolishing the two entities and the Serb threatening to declare his entity’s independence if Silajdzic persists. Both men know that neither of their positions is allowed under Dayton, and pursuing such retrogressive policies could gravely destabilize the Balkans. (This is, it should be remembered, what the war was about.)
Follow-up.

Many people I talked to made the same point: Political progress started to decline when it became clear that Bosnia was not a priority for the Bush administration. Washington must remember that without strong American leadership, the gains in Bosnia could still disappear. The decision to replace NATO with a smaller European Union military force was a terrible mistake, apparently dictated by then-Defense Secretary Donald Rumsfeld. A weak successor to Ashdown further undermined reform, thus emboldening opportunistic politicians to play the ethnic card again. The new high representative, Miroslav Lajcak from Slovakia, is a skilled diplomat, but he is not getting enough backing from Brussels, and almost everything he does is opposed by the Russians, who are trying to undermine the agreement they helped negotiate.
Foreign relations.
Grade: C+

There is one passport, a sharing of ambassadorships among ethnic groups and, more or less, a single foreign policy. The last foreign minister was Serbian, and he has been followed by a Bosnian Jew.

Lessons for other countries:

No agreement is worth much if it is not vigorously implemented and enforced. Political arrangements must reflect historical and ethnic realities. A unitary state with a strong central government may work in France or Japan, but not in Bosnia — nor, I believe, in such places as (to choose from many) Iraq, Afghanistan or Sudan. There (as in the United States, Germany and India), power must be shared between the central government and the states or provinces. The United States must recognize this in Iraq.