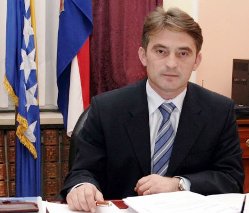 Å½eljko KomÅ¡iÄ‡, Member of the Presidency of Bosnia and Herzegovina, also
requested from The High Representative in Bosnia and Herzegovina Valentine
Inzko to use the Bonn Authority and remove Milorad Dodik from his offices of
the president of the SNSD Party and the Prime Minister of the Government of
the Republic of Srpska, and to ban him from performance of any political
duties because of his blatant violation of the Constitutional Order of BiH
and the Dayton Peace Agreement, and the serious consequences to the state
of Bosnia and Herzegovina, its Constitutional Order, security and
international position of our country, arising from this behavior/act of
Dodik.

By this act and statement, and given his Offices, Milorad Dodik has
endangered the BiH path toward NATO, while at the same time also
violated/transgressed the Decisions of the mandated State Authorities – The
Presidency and the Parliamentary Assembly of BiH, thus endangered strategic
commitment of BiH toward the full membership in the NATO.