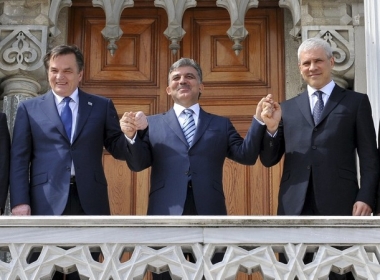 Presidents of Turkey Abdullah Gul, Serbia Boris Tadic and respectively, and Chairman of the Bosnia and Herzegovina Presidency Haris Silajdzic have agreed in Istanbul that in the future, regional policy should be based on ensuring security, the permanent political dialogue and the preservation of multiethnic, multicultural and multi-religious characteristics of the region. It was pointed out in a joint declaration adopted at the Istanbul summit, which was assessed by observers as historic. At the trilateral meeting, highlighted were a courageous and visionary approach of Serbian President Boris Tadic and Chairman of the B-H Presidency Haris Silajdzic and their determination to overcome historical differences and build a common future based on tolerance and understanding. Members of the B-H Presidency Haris Silajdzic, Nebojsa Radmanovic and Zeljko Komsic will soon visit Belgrade, the declaration reads. President Tadic and Turkish Prime Minister Recep Tayyip Erdogan will visit Srebrenica on the 15th anniversary of the crime.

ISTANBUL DECLARATION
We, the Heads of States of the Republic of Turkey, Bosnia and Herzegovina and Republic of Serbia met in Istanbul, as the continuation of the trilateral consultation mechanism between our countries, on 24 April 2010 to discuss the general political situation in the Balkans as well as the steps that can be taken for further enhancing the relations between BiH and Serbia.

We have expressed our appreciation for the courage and visionary approach displayed by the leadership of Serbia and BiH for their determination in overcoming historical differences, and building a common future based on tolerance and mutual understanding.

To this end, we have agreed in tackling some ongoing issues of common concern and others which might arise with the same resoluteness and strategic approach to our region.

We are of the opinion that in order to create an environment of lasting peace, stability and good neighborly relations, a joint vision has to be developed in which our nations can live in peaceful co-existence and harmony. We are supporting the sustainable return of refugees and displaced persons to their homes of origin throughout the region.

Having reviewed the existing situation, we have reaffirmed our commitment to contribute to regional peace and stability and underlined the importance of further developing the relations among our countries. Consequently, we have expressed our commitment to the principals enlisted below as common objectives in our future deliberations.

In this respect, we:

-have expressed our commitment to the territorial integrity, sovereignty and the legal personality of BiH within its internationally recognized borders, while stressing the importance of national reconciliation within BiH,

-have reaffirmed our commitment to take all necessary steps to ensure regional peace, stability and prosperity,

-have agreed on a common vision whose main pillars could be summarized as, security for all, high level political dialogue, economic interdependence and preservation of multi-ethnic, multi-cultural and multi-religious social fabric of the region,

-have underlined the importance of the Peace Implementation Council and the positive role played by the international community, including EU, Russia, Turkey and the USA, and agreed to intensify our cooperation with them,

-have emphasized the importance of pursuing the necessary steps for integration with the European structures in collaboration with other neighboring countries and international actors,

-have expressed our support for BiH for achieving the necessary reforms during the NATO/MAP process,

-have commended the progress made by BiH in the process of EU visa liberalization and meeting the necessary requirements to this end, while expressing the desire for its early implementation by the EU,

-have expressed our readiness for mutual support of our candidatures in international organizations,

-have also underlined the relevance of the SEECP for regional cooperation and development and agreed to further intensify this cooperation within the already existing structures,

-have stressed the importance of extending this trilateral cooperation to economic, environmental and cultural fields, including practical areas such as water management,

-have expressed our determination for the mutual protection of the cultural heritage in our respective countries,

-have welcomed the concrete results of the Turkey-BiH-Serbia Trilateral Consultation Mechanism, including the appointment of the BiH Ambassador to Belgrade and the adoption of the Declaration on Srebrenica by the Parliament of Serbia, as historical steps towards full normalization in the Balkans,

-in order to overcome the existing prejudices and to build a better future based on mutual respect and tolerance, have stressed the importance of avoiding the dissemination of information which carries negative implications for the future generations,

-have also underlined the importance of cross-border cooperation in particular in the areas of transportation and energy,

-have stressed our determination to extend humanitarian assistance whenever needed in the region.

Taking into consideration the fruitful results achieved through this trilateral mechanism, which has already proven to be a resilient confidence building measure, we have decided to institutionalize our meetings at the level of Heads of State three times in two years.

We have agreed on two major issues as an action plan in the coming months. One of them is the visit of President Silajdzic, President Radmanovic and President Komsic to Belgrade within the framework of Inter-State Cooperation Council between BiH and the Republic of Serbia, shortly to take up all pending issues in a comprehensive manner. Secondly, President Tadic together with Prime Minister ErdoÄŸan will visit BiH to commemorate the 15th Anniversary of the Srebrenica massacre.