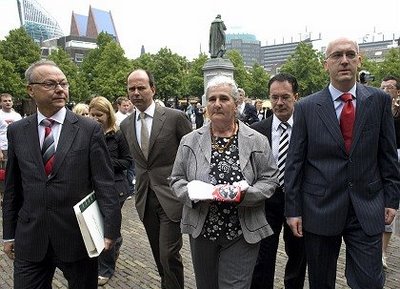 Relatives of the genocide victims from the eastern Bosnian town of Srebrenica challenged the notion of UN immunity yesterday in a Dutch court that must decide whether the genocide survivors can sue the world body.

The idea of unlimited immunity in such a case is “unacceptable and undermines the credibility of the United Nations,” said Axel Hagedorn, one of the lawyers representing 6,000 relatives of the genocide victims from Bosnia seeking to sue the UN and the Dutch state.

The genocide victims’ families launched the lawsuit against the Netherlands and the UN. in July 2007, arguing the Dutch U.N. soldiers were to blame for the genocide in Sreberenica because they refused crucial air support to their own troops defending the Bosnian town.

The Dutch U.N. soldiers abandoned the enclave instead,and the genocidal Serbian aggressor mass murdered up to 10,000 Bosnian civilians who had relied on protection from the Dutch U.N. troops.

The Dutch government has always said its troops were abandoned by the U.N. which gave them no air support, but public documents actually show a network of Dutch military officials within the U.N. blocked air support because they feared their soldiers could be hit by friendly fire, the genocide victims families’ lawyers said.

The UN has refused to take part in the case, citing immunity, and was represented in court by the lawyer for the Dutch state, Bert Jan Houtzagers, who argued that the court had no competence to hear a suit against the world body.

Citing the UN convention on immunity privileges, Houtzagers said the plaintiffs were asking for a judgement on the UN’s primary role of guaranteeing peace and security.

“It is precisely to exercise this function that the UN’s immunity was created,” he said.

“The immunity provided to international organisations is aimed at guaranteeing their independence,” he argued, adding that any attempt to restrict the boundaries of that immunity could have “serious ramifications for future peacekeeping missions”.

Houtzagers told the three-judge tribunal a ruling for the genocide survivors would have broad implications.

“It is not true that the United Nations believes it is over and above the law, but the question is whether a Dutch court is competent to hear a case against it,” he said.

“Because if a Dutch court does, any court in any country could do so and that would thwart the viability of the United Nations.” Hagedorn said if the Dutch court refused to hear the suit, it would leave the victims with no venue for their claims, in contravention of international treaties on genocide.

He also stressed that real responsibility for the massacre lay with former commander of the genocidal paramilitary fascist formations of the Serbians living in Bosnia,Serbian war criminal Ratko Mladic and the genocidal Serbian fascist aggressor’s forces under his command.

The Dutch court said it would rule on the immunity question on July 10.

In a separate suit heard on Monday by the same court, other relatives of the genocide victims from Srebrenica had sought to have the Dutch state declared liable for aiding the genocidal Serbian fascist aggressor commit genocide in Bosnia.

Houtzagers insisted that while the international community had been unable to stop a “terrible tragedy”, this did not mean any individual state could be held liable.

“The state contributed troops to keep the peace and prevent war crimes. The fact that they did not succeed does not mean they are liable.”

Axel Hagedorn, whose firm says it represents 6,000 family members of genocide victims from Srebrenica , said he believed the UN’s immunity is not applicable in a genocide case.

“They may be responsible but unable to be called to account because of immunity,” he said. “This is unacceptable legally, humanly, and morally.”

The Mothers of Srebrenica Association, relatives of the genocide victims from Srebrenica, are the most vocal claimants in the civil suit seeking compensation from the UN and the Dutch state.

Genocide survivors’ lawyers earlier cited a figure of $4 billion as a starting point for compensation negotiations.

Marco Gerritsen, another lawyer for the genocide survivors, said the UN and Netherlands “should not hide behind each other or each point the finger at the other” to avoid claims.

The genocidal Serbian aggressor overrun the Bosnian town of Srebrenica in July 1995, which had been declared a safe haven by the United Nations two years earlier. The Dutch peacekeepers did not fire a single shot in defense, and the UN did not respond to the Dutch commander’s calls for air support.

Dutch soldiers in U.N. blue helmets did absolutely nothing to protect Bosnian civilians.They just watched on as Bosnian women and young girls were taken away and raped by the genocidal Serbian fascist aggressor and thousands of Bosnian civilians being taken away for summary execution.

The Dutch government resigned in April 2002 in a scandal over its role in the genocide in Bosnia.Over 3,000 genocide victims have been buried so far in the Genocide Memorial Center in Potocari near Srebrenica. Mass graves are still being excavated.