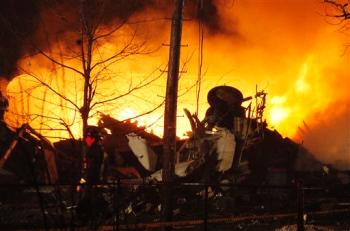 Federal investigators are searching through the rubble of a deadly plane crash near Buffalo for the “black boxes.”

National Transportation Safety Board spokesman Steve Chealander (CHEE’-land-duhr) said Friday that 14 investigators have been assigned to the crash of Continental Connection Flight 3407.

The accident killed 49 people on the plane and a person in the house it crashed into Thursday night.

Chealander says the smoldering scene is still too hot to collect debris. But investigators are going after the fight data and cockpit voice recorders in the plane’s largely intact tail.

The flight originated in Newark, N.J.

THIS IS A BREAKING NEWS UPDATE. Check back soon for further information. AP’s earlier story is below.

CLARENCE, N.Y. (AP) â€” A Continental commuter plane coming in for a landing nose-dived into a house in suburban Buffalo, sparking a fiery explosion that killed all 49 people aboard and a person in the home. It was the nation’s first fatal crash of a commercial airliner in 2 1/2 years.

Witnesses heard the twin turboprop aircraft sputtering before it went down in light snow and fog around 10:20 p.m. Thursday about five miles from Buffalo Niagara International Airport. Continental Connection Flight 3407 from Newark, N.J., came in squarely through the roof of the house, its tail section visible through flames shooting at least 50 feet high.

“The whole sky was lit up orange,” said Bob Dworak, who lives less than a mile away. “All the sudden, there was a big bang, and the house shook.”

Two others in the house escaped with minor injuries. The plane was carrying a four-member crew and an off-duty pilot. Among the 44 passengers killed was a woman whose husband died in the World Trade Center attacks of Sept. 11, 2001.

By morning, with the rubble still smoking, the task of retrieving remains had not yet begun.

“It was a direct hit,” Bissonette said. “It’s remarkable that it only took one house. As devastating as that is, it could have wiped out the entire neighborhood.”

President Barack Obama voiced condolences, saying “our hearts go out to the families and friends who lost loved ones.”

No mayday call came from the pilot before the crash, according to a recording of air traffic control’s radio messages captured by the Web site LiveATC.net. Neither the controller nor the pilot showed concern that anything was out of the ordinary as the airplane was asked to fly at 2,300 feet.

Eventually he told an unidentified listener to contact authorities on the ground in the Clarence area.

After the crash, at least two pilots were heard on air traffic control messages saying they had been picking up ice on their wings.

“We’ve been getting ice since 20 miles south of the airport,” one said.

The National Transportation Safety Board sent a team of investigators to Buffalo. The Department of Homeland Security said there was no indication of terrorism.

While residents of the neighborhood were used to planes rumbling overhead, witnesses said it sounded louder than usual, sputtered and made odd noises.

David Luce said he and his wife were working on their computers when they heard the plane come in low.

“It didn’t sound normal,” he said. “We heard it for a few seconds, then it stopped, then a couple of seconds later was this tremendous explosion.”

Dworak drove to the site, and “all we were seeing was 50- to 100-foot flames and a pile of rubble on the ground. It looked like the house just got destroyed the instant it got hit.”

One person in the home was killed, and two others inside, Karen Wielinski, 57, and her 22-year-old daughter, Jill, were able to escape with minor injuries. Twelve homes were evacuated.

Firefighters got as close to the plane as they could, he said. “They were shouting out to see if there were any survivors on the plane. Truly a very heroic effort, but there were no survivors.”

It was the first fatal crash of a commercial airliner in the United States since Aug. 27, 2006, when 49 people were killed after a Comair jetliner took off from a Lexington, Ky., runway that was too short.

About 30 relatives and others who arrived at the airport in the overnight hours were escorted into a private area and then taken by bus to a senior citizens center in the neighboring town of Cheektowaga, where counselors and representatives from Continental waited to help.

“At this time, the full resources of Colgan Air’s accident response team are being mobilized and will be devoted to cooperating with all authorities responding to the accident and to contacting family members and providing assistance to them,” the statement said.

Chris Kausner, believing his sister was on the plane, rushed to a hastily established command center after calling his vacationing mother in Florida to break the news.

“To tell you the truth, I heard my mother make a noise on the phone that I’ve never heard before. So not good, not good,” he told reporters.

The 9/11 widow on board was identified as Beverly Eckert. She was heading to Buffalo for a celebration of what would have been her husband’s 58th birthday, said Mary Fetchet, a 9/11 family activist.

Clarence is a growing eastern suburb of Buffalo, largely residential but with rural stretches. The crash site is a street of closely spaced, older, single-family homes that back up to a wooded area.

The crash came less than a month after a US Airways pilot guided his crippled plane to a landing in the Hudson River off Manhattan, saving the lives of all 155 people aboard. Birds had apparently disabled both its engines.

On Dec. 20, a Continental Airlines plane veered off a runway and slid into a snowy field at the Denver airport, injuring 38 people.

Continental’s release said relatives and friends of those on Flight 3407 who wanted to give or receive information about those on board could telephone a special family assistance number, 1-800-621-3263.

Contributing to this report were Associated Press writers Carolyn Thompson in Buffalo, Linda Franklin in Dallas, Daniel Yee in Atlanta, Ron Powers in Washington, and Cristian Salazar and Jennifer Peltz in New York.