Federal prosecutors charged a 46-year-old Bosnian Serb with lying to gain refugee status in the U.S., saying he failed to disclose that he served in a police unit that took part in the massacre of thousands of Muslim men and boys during Bosnia-Herzegovina’s three-year war.

Mladjen Cvijanovic, who has apparently lived in Milwaukee since at least 2003, was charged Tuesday with immigration fraud. If convicted, he faces up to 10 years in prison and likely deportation.

His attorney, Jeffrey Jansen, said Wednesday he had learned little about the case so far. He said prosecutors in Milwaukee postponed Cvijanovic’s detention hearing from Tuesday until Friday to give them time to confer with prosecutors in Bosnia-Herzegovina.

“There will be some effort to deport him back overseas,” Jensen said.

Prosecutors say Cvijanovic lied in his May 2002 application about several things, including where he was born and his military service. They say Cvijanovic claimed to be from the city of Kakanj, when he was actually from Zenica, and that that his only stint in the military was as a cook from 1984 until 1985. He said he had been unemployed since 1992 and had been forced out of his home by controlling Muslims. In 2003, Cvijanovic applied for and received permanent residency status.

But records uncovered by United Nations and Bosnian police forces that were recently provided to immigration officials tell a different story about Cvijanovic, prosecutors contend.

According to their court filing, Cvijanovic joined the Bosnian Serb police force in 1993 and was assigned with 29 other members of his unit to aid Bosnian Serb military forces during their July 1995 invasion of Srebrenica. The town and surrounding area were under U.N. protection during the war, which ended in 1995, but lightly armed Dutch troops offered no resistance as Bosnian Serb forces overran the town.

An estimated 12,000 to 15,000 military-aged men tried to escape Srebrenica but were captured by ethnic Serb forces, including Cvijanovic’s unit. Up to 8,000 were ultimately executed and buried in mass graves in Europe’s worst massacre of civilians since World War II.

Prosecutors say Cvijanovic told investigators that his unit was assigned to the town of Konjevic Polje, near Srebrenica, for seven days that July to “stop” Muslims passing through the area. The documents don’t suggest that Cvijanovic, himself, is suspected of killing anyone.

Under U.S. law, anyone who ordered, incited, assisted or otherwise persecuted any person because of their race, religion or nationality can’t be considered a refugee.

Bosnia-Herzegovina declared independence from Yugoslavia in 1992. At the same time Bosnian Serbs created their own state within Bosnia called the Republika Srpska, complete with its own army, president, constitution and police, which were a component of the military and assisted it in war-related emergencies.

The country has been divided into a Bosnian Serb republic and a Muslim-Croat federation since 1995. Both have wide autonomy but share a common presidency, parliament and government.

Milwaukee has a large Serbian population, but Jensen said he was unsure why Cvijanovic chose to relocate there or whether he has lived there since arriving in the United States.

Jensen said he believes Cvijanovic is separated from his wife and lives with his two daughters. He ran a deli for a while in Milwaukee and currently works as an “hourly laborer” of some type, Jensen said. (AP) 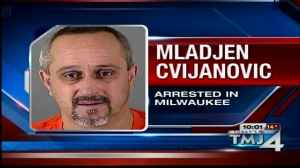 Man Charged With Immigration Fraud
MILWAUKEE – People in the Serbian community tell TODAY’S TMJ 4 they are upset by the news that one of their own has been arrested. Federal prosecutors say the man they have in custody lied about his role in war crimes.

Mladjen Cvijanovic was arrested Monday at this apartment on Milwaukee’s south side. He lived here with his daughter who did not want to talk with us.

The landlord tells me he is a good man, who works hard.

Court documents indicate Cvijanovic lied to get in the United States. Federal prosecutors allege the 46-year old Bosnian Serb failed to disclose his police and military service during the mid 1990’s when thousands of Bosnian Muslims were executed. The massacre has been called the worst case of genocide in Europe since World War two. Cvijanovic has now been charged with immigration fraud.

After his arrest, Cvijanovic allegedly admitted he “lied about and concealed his occupation as a police officer” when trying to enter the country in 2002, “because he wanted to be able to bring his daughters to the United States.”

The criminal complaint does not make any allegation that Cvijanovic committed any war crimes and he has not been charged with any. By Charles Benson