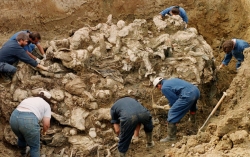 Reference is being made to the article authored by James Bissett, Canadaâ€™s former ambassador to Yugoslavia, published in your Friday, June 27, 2008, edition, titled â€œDonâ€™t forget all the victims of Srebrenica.â€
The disinformation imbued in that article certainly calls for a rebuttal and presentation of facts, free of nuances, half-truths, omissions as well as deviations from the judicial process of the highest legal authority in the world, The International Court of Justice, which, in its Ruling on February 27, 2007, publicly declared that genocide against Bosniaks was committed by the Serbs in Srebrenica and surrounding areas. Mass graves of over than 8,000 Muslim men and boys are still being located and documented. It is an international effort. Canadaâ€™s public is ill served in that it is not apprised of that first-hand documentation of unearthing of the evidence of a crime, to the likes of which, the Europe and the world of the post-World-War-Two exclaimed: â€Never again!â€ As a matter of fact, genocide against the Bosniaks in their homeland of Bosnia and Herzegovina, was not limited to just Srebrenica, it was widespread and in the end, some 220,000 civilians were murdered, with well over 90% of them being of Muslim faith.
Mr. Bissett claims that Naser Oric committed war crimes. The facts do not support that claim. On July 2, 2008 a U.N. appeals court overturned the war crimes conviction of Naser Oric. While Serbian perpetrators of war crimes are still at large, the Bosnian government and public faces its alleged war crimes. The commander of the Bosnian Serb Army, Gen. Ratko Mladic – charged with genocide for the Srebrenica killings – is still in hiding and is believed to be in Serbia. Radovan Karadzic, who is responsible for mass murders and rapes, at a holocaust level, is still in hiding too.
It is regrettable that Mr. Bissett conveys the message that he was sent to be Canadaâ€™s ambassador to Yugoslavia holding a clearly pro-Serbia bias, although he does call Croats to support his misinterpretation of the historical facts. He, unfortunately, is not the only official representative of Canada who was sent to Belgrade, Serbia, or to Bosnia and Herzegovina for that matter, and who ended up denying and defending the indefensible – crimes against humanity, crimes of genocide and the crime of being a willing and ready accomplice to the crime of genocide.
We invite your Editorial Board to convey a meeting with members of the Bosniak community as we feel that it takes an effort to build and maintain a rapport, to serve as a basis for building a community of peoples of all religions – religious differences being the slant which Mr. Bissett attached to his article. In order to achieve that rapport, it takes honesty and willingness to learn and understand the plight of the people who were killed, raped, or brutally thrown out of their homes because they are of Muslim faith.
While we cherish and respect our welcome here, in Canada, we live here because of the genocide committed against us in our own homeland, Bosnia and Herzegovina. Surely, James Bissett does not have more knowledge and understanding of our own predicament and history than hundreds of thousands of Bosnians who live on this continent. Most of us arrived here by way of force – being thrown out of our own country because we are Bosniaks, an island of Islam in the heart of Europe. That is the undeniable fact.
We invite you to help stop the cycle of blame. We invite you to help bridge the imposed divides of differences. We all, after all, are the believers in the One and the Only, our Lord Almighty, the only Creator. We cherish the one and same Divine Being. The Councils of Florence had been held in order to bridge the imposed divide of belief. It was bridged then. We need to bridge it now, again.
In the end, let us not forget that Mr. Bissettâ€™s comment was made and published just two weeks before the 13th anniversary of the Srebrenica genocide – July 11, 1995. As such, it is, regrettably, rather inflammatory. We need and deserve better in Canada. All of us.

Thank you.
With respect,

On behalf of the Board of Directors of the Congress of North American Bosniaks
Emir Ramic, President of the Board