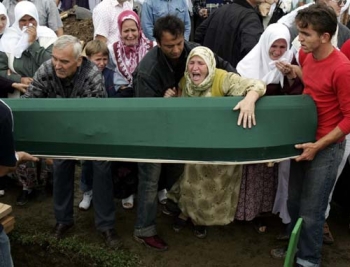 We invite all pro-Bosnian individuals and organizations to support the Resolution commemorating Bosnia and Herzegovina and the genocide that happen in the Bosnian town of Srebrenica.

On January 15, 2009, the European Parliament adopted a resolution commemorating the victims and declaring July 11 as Srebrenica Remembrance Day throughout European Union.

The U.S. Senate and House of Representatives adopted resolutions in 2005 commemorating the victims of genocide perpetrated in Bosnia and expressing the sense of the Senate regarding the massacre at Srebrenica in July 1995. Both resolutions acknowledged aggression and ethnic cleansing perpetrated by Bosnian Serb forces during the aggression on Bosnia. Bothe Resolutions recognized that the policies of aggression and ethnic cleansing as implemented by Serb forces in Bosnia and Herzegovina from 1992 to 1995 meet the terms defining the crime of genocide in Article 2 of the Convention on the Prevention and Punishment of the Crime of Genocide.

In 2008, Bosnia Herzegovina Tribute Week resolution was passed in the State of Michigan.

We must work on promoting similar resolution further to facilitate better understanding of Bosnian history and the aggression against Bosnia.

Please share the news and the idea about this Resolution with your friends, work colleagues, and relatives and ask for their participation in commemorating this in their own way: ask them to wear yellow ribbons, attend exhibits about the genocide in Bosnia and Herzegovina, wearing pins or something similar.

PROJECT IS TO DECLARE A BOSNIA AND HERZEGOVINA WEEK IN YOUR COMMUNITIES AND TO COMMEMORATE THE GENOCIDE IN SREBRENICA. INVITE ALL BOSNIAN ORIENTED INDIVIDUALS AND ORGANIZATIONS TO LOBBY FOR IT ON THE CITY, STATE AND OTHER LEVELS OF GOVERNMENT TO PASS THIS RESOLUTION AND HERE IS A TEMPLATE YOU CAN USE:

RESOLUTION PROCLAIMING THE BOSNIA AND HERZEGOVINA WEEK AND JULY 11 AS THE DAY OF COMMEMORATION OF THE GENOCIDE IN SREBRENICA [City, State]

Representatives or Senators or Governor or Mayor

Whereas, Both The United States Senate and the United States House of Representatives passed resolutions in 2005 acknowledging the genocide that the Serbian forces perpetrated in Srebrenica, and all of Bosnia from 1992 to 1995; and

Whereas, July 11, 2009; is commemorated as the 14th anniversary of the Srebrenica massacre in which at least 8,372 innocent Bosniak civilians were summarily executed and 30,000 were expelled from their homes in the worst atrocity in Europe since the holocaust; and

Whereas, This anniversary raises awareness of the tragic suffering of the Bosnian people and honors and remembers those who died as a result of the policies of ethnic cleansing and aggression; and

Whereas, the Congress of North American Bosniaks (CNAB) is the umbrella organization representing Bosniaks in the United States and Canada requested this resolution; and

Whereas, The State/City of [NAME] recognizes the importance of this event to bring closure for the Bosnian people through justice and truth; now, therefore, be it

We call upon all citizens to work toward ending the cycle of violence and promoting peaceful coexistence among all.

For more information about this action, please contact the following CNAB representatives:

Semir ÄuliÄ‡, President of the Georgia Chapter of the CNAB
E-mail: [email protected]

Sanel BabiÄ‡, President of the Indiana Chapter of the CNAB
E-mail: [email protected]

Murat MuratoviÄ‡, President of the Missouri Chapter of the CNAB
E-mail: [email protected]

Adis Trnjanin, President of the Oregon Chapter of the CNAB
E-mail: [email protected]

Zijad BeÄ‡ireviÄ‡, President of the Vermont Chapter of the CNAB
E-mail: [email protected]