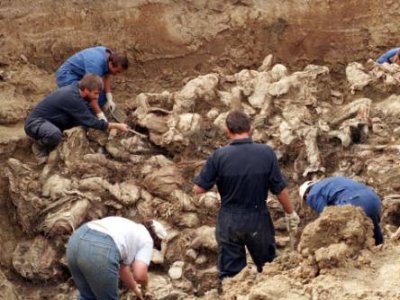 With its Resolution No. 827 of 25 May 1993, the UN Security Council, expressing once again its grave alarm at continuing reports of widespread and flagrant violations of international humanitarian law occurring within the territory of the former Yugoslavia, and especially in the Republic of Bosnia and Herzegovina, established the International Criminal Tribunal for the Former Yugoslavia (ICTY).

The legal basis for the establishment of ICTY was the decision of UN Security Council in which it was stated that the situation in former Yugoslavia constituted a threat to international peace and security. UN Security Council believed that the establishment of an international tribunal and the prosecution of persons responsible for the violations of international humanitarian law would contribute to ensuring that such violations are halted and effectively redressed. With this and other resolutions UN Security Council set a long series of strategic goals for the ICTY. The first goal of ICTY’s establishment was already missed at the very beginning. ICTY not only failed to halt further war crimes, but even awaited the genocide in Srebrenica which was committed in July 1995 as the â€œgrand finaleâ€ of war atrocities in Bosnia and Herzegovina.

After the recent partial acquittal of Radovan KaradÅ¾iÄ‡ at the halfway stage of his trial according to which he was found not to be responsible for genocide in seven Bosnia and Herzegovina municipalities, it has become obvious that all the goals set by the UN Security Council have collapsed, including all the jurisprudence ICTY has reached since its establishment.

GENOCIDE AS AN ACADEMIC DISCUSSION AND LEGAL FICTION

The issue of genocide in connection with ICTY has become the subject of an academic discussion for most judges at ICTY, ICJ, ICC and other tribunals in the Hague as well as at diplomatic meetings and in private judicial and political circles, which is best illustrated by the statements made by the South Korean Judge O-Gon Kwon who has been presiding in the Radovan KaradÅ¾iÄ‡ case. Accusing the Japanese of committing war crimes against the Korean people while stating that nobody was held responsible for those crimes was a surprising statement made by judge O-Gon Kwon, that can be heard from the diplomatic circles discussing genocide and the dissatisfaction of war crimes victims in Bosnia and Herzegovina. Kwon’s statements remind of the statement made by Radovan KaradÅ¾iÄ‡ when he responded to the establishment of ICTY: â€œShould this tribunal be established, it will have plenty of work to do, starting with the 2nd World War crimes, first of all against the Serbs …, and then it will have to deal with the war crimes in Vietnam, Korea, the Cambodian war â€¦â€. That is too great coincidence even for an international tribunal!

Judge O-Gon Kwon also participated in the adoption of several other compromising decisions and judgements at ICTY. Still, the mistakes made by certain ICTY judges remained unsanctioned and protected by the UN diplomatic immunity.

Analysts have warned that a system should be introduced to sanction judges and other ICTY staff and that those who make mistakes in their work should be forced to resign and stop working for the Tribunal. This would enable the UN and ICTY to preserve their reputation. Analysts therefore suggest that the best solution would be for the judge O-Gon Kwon to resign from ICTY.

RESPONSIBILITY LIES WITH THEODOR MERON
The greatest responsibility for the future of ICTY lies with the current President of ICTY and the President of the International Residual Mechanism for Criminal Tribunals Theodor Meron, an experienced lawyer and judge, who should examine all the possible implications of the partial acquittal in the KaradÅ¾iÄ‡ case as well as a series of other issues that have appeared in the final stage of ICTY’s work. On 7 June 2012 President Meron explained the function of the Residual Mechanism (the institution which will replace ICTY and continue its work) to the UN Security Council as follows: â€œBy establishing the Residual Mechanism, the Council has helped to guarantee that the closure of the two pioneering ad hoc tribunals does not open the way for impunity to reign once moreâ€.

Acting under Chapter VII of the Charter of the United Nations, the UN Security Council adopted Resolution 1966(2010) on the establishment of the Residual Mechanism which shall continue certain functions of ICTY after its closure.

Analysts have concluded that the responsibility now lies with ICTY President Theodor Meron who has the obligation to protect and preserve the reputation of the Tribunal and to ensure the conditions for its professional functioning. ICTY’s reputation now depends on the next steps which its President Meron will take.

â€œJustice is an indispensable ingredient of the process of national reconciliation. It is essential to the restoration of peaceful and normal relations between people who have had to live under a reign of terror. It breaks the cycle of violence, hatred and extra-judicial retribution. Thus Peace and Justice go hand-in-hand,â€ said the late Antonio Cassese, ICTY’s first and most eminent President.

However, in case of KaradÅ¾iÄ‡’s successor in the function of the President of Republika Srpska Milorad Dodik, Cassese’s statement has been derogated and devalued. Namely, as a member of the war-time Assembly of Republika Srpska Dodik supported rocket attacks on Zagreb on 2 and 3 May 1995, which is evident from the transcript of the 3rd extraordinary meeting of Republika Srpska National Assembly which was held on 23 and 24 May 1995 and chaired by the war crimes convict MomÄilo KrajiÅ¡nik. The transcript, the authenticity of which was confirmed by the Hague Tribunal, proves that Dodik supported the bombing of Zagreb, which is evident among other from the following statement made publicly at the meeting of the Republika Srpska National Assembly: â€œRegarding the bombing of Zagreb, I agree that Zagreb should be the target, but that should not be said publicly; if it is to be said, it should have been done in another way, the editor should be discreet in letting that information go outâ€¦â€

As long as it has to deal with persons such as Dodik and the like, Bosnia and Herzegovina cannot expect international reconciliation, restoration of normal relations and its future in the community of European nations. Political leaders who are ready to use any opportunity to deny war crimes and genocide in Srebrenica and other parts of Bosnia and Herzegovina now have their ally â€“ Judge O-Gon Kwon and some of his colleagues.

The IFIMES International Institute warns it is now high time the chief State Attorney of the Republic of Croatia Mladen BajiÄ‡ pressed charges against Milorad Dodik for having committed or instigated the war crime. According to our information chief State Attorney BajiÄ‡ holds all the relevant evidence to initiate the prosecution of Milorad Dodik. Should he lack some evidence, IFIMES possesses the relevant documents proving Dodik’s involvement in the war crime, which it can submit to chief BajiÄ‡.

ICTY and BOSNIA AND HERZEGOVINA

Although ICTY was initially established to deal with war crimes in Bosnia and Herzegovina, the latest partial judgement in the Radovan KaradÅ¾iÄ‡ case has opened Pandora’s Box and brought Bosnia and Herzegovina back to where it was as the beginning. The effects achieved by ICTY have collapsed like a house of cards. This huge mechanism, which had once fought a brave fight together with its founder and the countries from the region in order to realise its mandate, has today sunk into despair of judicial bureaucratism, self-complacency and mere academic discussion. The correction of mistakes in the partial acquittal of KaradÅ¾iÄ‡ and the resignation of Judge O-Gon Kwon from the Radovan KaradÅ¾iÄ‡ case and from ICTY could return some of the lost reputation of ICTY.