President Bush made a brief statement Saturday as he returned to the White House from the Camp David presidential retreat, where he and Mrs. Bush had spent the Thanksgiving holiday. 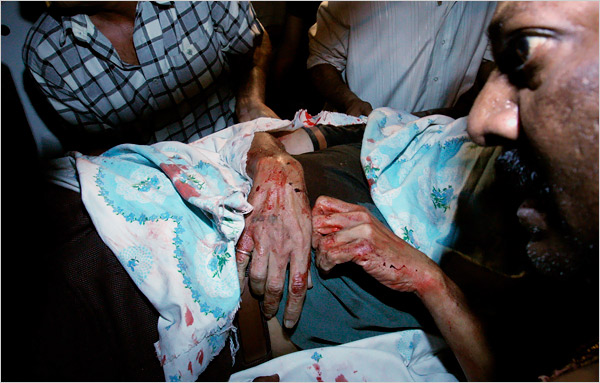 “We pledge the full support of the United States as India investigates these attacks, brings the guilty to justice and sustained its democratic way of life,” he said.

Bush said his administration has been monitoring the situation in India closely since the attacks began in Mumbai on Wednesday. He held a videoconference Saturday with Secretary of State Condoleezza Rice, U.S. Ambassador to India David Mulford and other national security officials.

Earlier in the week, the president called Indian Prime Minister Manmohan Singh to send his support and condolences.

Bush said Saturday he is confident that the people of Mumbai and India will persevere in the face of this tragedy. “The killers who struck this week are brutal and violent, but terror will not have the final word. People of India are resilient.

People of India are strong. They have built a vibrant, multiethnic democracy that can withstand this trial,” he said.

The president assured Singh and the Indian people of continuing support from Washington. “As the people of the world’s largest democracy recover from these attacks, they can count on the world’s oldest democracy to stand by their side,” he said.

President Bush said White House officials are working to ensure that Americans in India are safe.

Bush also said his administration was keeping President-elect Barack Obama informed on the situation. Obama called Prime Minister Singh on Friday to express his condolences on the tragedy. T

The incoming leader said the United States has one president at a time, but promised that he will watch developments closely. He also discussed the situation with Secretary of State Rice earlier in the week.

The President-elect is expected to announce his national security team in the coming days. Obama is reported to have chosen Senator Hillary Clinton, his former rival for the Democratic Party’s presidential nomination, as Secretary of State.