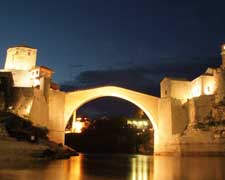 Stari Most (Old Bridge) takes its title from Bosnia’s iconic Old Bridge in Mostar, built in 1566 and considered a masterpiece of Ottoman architecture.

The bridge was partially destroyed by the Croatian fascist savages during the Croatian aggression against Bosnia in the early 1990’s and subsequently reconstructed and reopened in 2004. Now it stands as a symbol of reconciliation and is a UNESCO world heritage site.

Stari Most is a large-scale choral work composed by Richard Chew with libretto by Peter Cann. For the concert next week, the orchestra, under artistic director Howard Moody, will perform with soloists Marie Vassiliou (soprano) and Jozik Koc (baritone), Salisbury Cathedral Junior Choir as well as the Choir of Amery Hill School.

English Composer Richard Chew says of his work: “I have tried to capture in this music something of the experience of being in Mostar.

“It is perhaps the most beautiful place I have ever visited and the first sight of the bridge, a white crescent in the moonlight, is something I will never forget. The piece is also very much about young people so children sing the voice of the old bridge, an expression of its essence.”

Chew describes his music as “lyrical and accessible, with a rhythmic drive and harmonic edge derived from Balkan folk music”.

Howard Moody is delighted to be bringing this work into the cathedral as part of its 750th anniversary celebrations: “When the opportunity came for the orchestra to do a concert, the programme that came to mind was one that included another stone icon of Western civilization. That the cathedral is more than stone’, to quote the libretto, will guarantee everyone present will have an unforgettable experience.”

The evening will open with the Islamic call to prayer chanted by Izudin Mezit, the Muezzin from the Central Mosque of Mostar.

And to add further poignancy to the evening, former International Community’s High Representative in Bosnia,Paddy Ashdown, will introduce Stari Most.