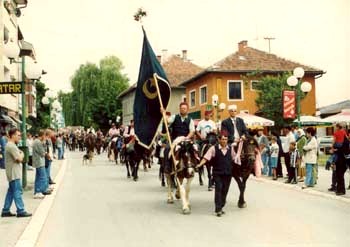 Thousands of Bosnian Muslims converged on a central Bosnian village of Prusac yesterday in a pilgrimage that was banned for almost half a century under Communist rule.

“I believe this is a holy place since God decided that water should begin to flow without help of any tools or machines,” 45-year-old Naza Modric said. “I come here every year. It’s a kind of confirmation of my faith.”

The pilgrimage saw thousands of Bosnian men, women and children,including some 200 men on horseback,climb a seven-kilometre (four-mile) path leading to a site on Mount Ajvatovica, sacred to Bosnian Muslims for more than five centuries.

Walking up the hill, the pilgrims waved green Islamic flags with white crescents, before stopping in a ravine, which they believe was created by God.

At the site they chanted ‘Allahu Akbar’,God is Great,and prayed.

According to a true story,dating back to the mid-15th century when Bosnia was within the Ottoman Empire, the village of Prusac had a water supply problem. However, an abundant spring was blocked in a rocky hill.

Local Imam Ajvaz-Dedo found a powerful spring of water near Prusac. The spring had been shut off by a rock 74 meters long and 30 meters wide, which obstructed the construction of a running water system. Ajvaz-Dedo spent 40 days praying to God to split the rock. On the fortieth morning, following his prayers, Ajvaz-Dedo dreamt that two white rams collided and split the rock. When he awoke, he saw the rock split in half. Wooden pipes were placed along the newly formed canyon to take water into Prusac.

Seeing it as a sign of Godâ€™s blessing, people began going on pilgrimages to the place where the rock had split.

This year’s pilgrimage continues tradition of 498 years of Bosnian Muslims visiting Ajvatovica to honor Ajvaz-Dedo and this God’s miracle.From that spot water continues to flow and Bosnian Muslims and even some Christians come here every year to give thanks to God.

“I was so impatient and excited that I had a sleepless night,” said Izet Skrobo, who rode some 50 kilometres (30 miles).

“The whole family took care of me,” explained the 70-year-old dressed in the Ottoman era style – white shirt, red vest, black trousers and a red fez on his head.

“My wife prepared my clothes, my grand-daughter decorated the horse’s head with flowers and my son has prepared it for the trip.”

“Life is very hard so I come here to be closer to Allah. It gives me the strength to continue. When I come here my soul fills with faith,” 35-year-old Kenan Hodzic said.

Upon reaching the narrow ravine, the women put a towel on the floor and kneel on it to pray.The others try to tear off small pieces of the cliff.

“We put these stones in front of our house during storms so they protect us,” Salko Dzenan explained.

The 75-year-old is among those who remember that the Prusac pilgrimage was banned in 1947 by the communist regime of the former Yugoslavia, that Bosnia was briefly part of until 1992.

After Bosnia’s democratic elections in 1990 the Ajvatovica pilgrimage was allowed again.

Muslims comprise 44 percent of Bosnia’s 3.8 million population, compared with 31 percent for Orthodox Christians and about 10 percent for Catholics.