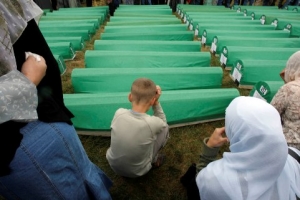 Seven Bosnian Serbs have been convicted of genocide and jailed over the massacre of Bosnian Muslims (Bosniaks) in Srebrenica in 1995.

After a two-year trial, the Bosnian war crimes court in Sarajevo ruled that the men helped in the systematic murder of more than 1,000 Bosniaks in one day.

In all, as many as 8,000 men and boys were killed in a week in Srebrenica.

The ruling comes a week after the capture of Bosnian Serb leader Radovan Karadzic, also accused of genocide.

Mr Karadzic is expected to be sent soon to the war crimes tribunal in The Hague to face charges over his involvement in the Srebrenica massacre.

The trial in Sarajevo was the first to be held in Bosnia over crimes committed at Srebrenica, and the first for genocide. Previous such trials have been held at The Hague.

‘Permanent extermination’
Eleven men were originally charged with genocide in the case – all of whom were police officers or soldiers with the Bosnian Serb wartime authorities.

Four were acquitted and the other seven were given sentences ranging from 38 to 42 years.

“The defendants knew that by killing the Bosnian Muslim men, they participated in the permanent extermination of Bosnian Muslims from Srebrenica,” said judge Hilmo Vucinic.

The group of seven played a part in separating more than 1,000 Bosniak men from their families.

The court said that the murdered men were among a group trying to escape from Srebrenica after it came under Bosnian Serb control.

The men were told they would be taken to safety if they surrendered.

Instead, they were taken by bus or on foot to the warehouse of an agricultural co-operative in the village of Kravica before being murdered in a single day.

The convicted men either carried out executions themselves using firearms or hand grenades, or prevented people from escaping from the warehouse.

Killing spree
Munira Subasic, who lost her husband and son in Srebrenica and who runs an association of survivors, said she was pleased with the verdict but that her pain “can never be healed”.

“The mothers of these men still have their sons, their wives still have husbands, their children still have fathers and I am still looking for my son’s bones,” she told AFP news agency.

The massacre was part of a week-long killing spree by Bosnian Serb forces, who overran the UN-protected Srebrenica enclave.

All but two of the men were were born in Bosnia-Hercegovina – Dragisa Zivanovic was born in Serbia and Branislav Medan was born in Croatia.

Five former Bosnian Serb officers have already been jailed by the international war crimes tribunal at The Hague over the Srebrenica atrocities, while further suspects are awaiting trial.

A Serbian court has also jailed four former Serb paramilitaries for their role in the Srebrenica massacre.