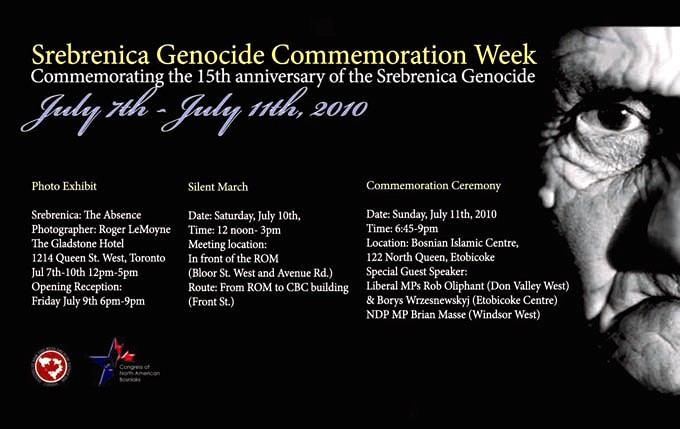 TORONTO: For the past 15 years, survivors of the Srebrenica genocide have been seeking justice for the 8,372 men and boys killed by Bosnian Serb forces in what was supposed to be a United Nations protected enclave. Their witness accounts of this systematic, civilian massacre helped prosecutors convict seven men in The Hague earlier this month. Two former security officers received life in prison, and were handed down rare genocide convictions by a three-judge panel in the International Criminal Tribunal for the Former Yugoslavia.

Despite the convictions, the Canadian government has not yet passed a resolution to commemorate the Srebrenica genocide as many other countries â€“ including the United States and members of the European Union â€“ have. But the Bosniak (Bosnian Muslim) community in Toronto believes that this violation of human rights needs to be recognized and remembered so as to decrease the chances of a similar war crimes occurring elsewhere in the world.

On July 7, in partnership with the Congress of North American Bosniaks and the Institute for the Research of Genocide-Canada, the Bosniak community in Toronto will begin this yearâ€™s Srebrenica Genocide Commemoration ceremony with a photo exhibit from award-winning photojournalist Roger Lemoyne at the Gladstone Hotel. Lemoyneâ€™s gripping photo series, which began in 1995, conveys the sense of loss, an unwavering need for justice and the importance of preserving history. The exhibit, titled Srebrenica: The Absence, is open from noon to 5 p.m. and runs until July 10.

On Saturday, July 10, hundreds of people will take a stand for human rights by taking part in a silent march downtown Toronto, starting at the Royal Ontario Museum at noon. Participants will display the message â€œNever forget,â€ asserting the need to adequately commemorate the loss of lives in Srebrenica.

For more information about the events or to arrange an interview, please contact: