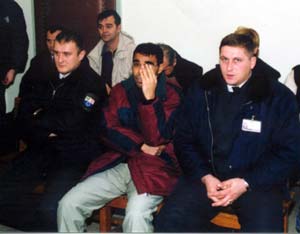 The Cantonal Court of Sarajevo confirmed today it launched an investigation into two former senior Bosnian officials, suspected of violating the country’s laws by handing over six Bosnian citizens to US authorities six years ago.

The Cantonal Prosecutor Branko Sljivar said in a statement that the investigation would include Bosnia’s former prime minister and Social-Democratic Party (SDP) leader Zlatko Lagumdzija, his party colleague and former interior minister Tomislav Limov, as well as a number of employees of the city’s prison.

The court said Lagumdzija and Limov might be charged with illegal deprivation of liberty and violation of the principle of equal rights of all citizens.

Six Bosnian citizens of Algerian origin, Bensayah Belkacem, Mustafa Adir, Saber Lahmar, Mohammed Nehle, Lakdar Boumedien and Boudellah Hadz, known as the Algerian Group, were arrested in Bosnia in October 2001 under suspicion of planning possible attacks against US and British diplomatic missions in Bosnia. All were married to Bosnian women.

Although the Bosnian Supreme Court ordered their release, after finding no evidence of their alleged involvement in terrorist activities, then premier Lagumdzija ordered their arrest again in January 2002 and handed them over to the US authorities.

Prosecutor Sljivar, in his statement, said Lagumdzija and Limov were suspected of “handing over naturalized Bosnian citizens (of Algerian origin) to US authorities, based on ethnic differences of those people, who belong to the Semite group of peoples.”

“With no reason and without any judicial decision or any other decision of a state institution to prevent the free movement of the group, they were detained, kept in detention for some time and then extradited to US authorities without a legal decision of a local court on extradition,” according to the statement.

The men were transported to the US’ Cuba-based Guantanamo military base, used as a prison, where they were believed to suffer difficult conditions and humiliation, without the basic conditions for normal life.

Handing over the group to the US, where the death punishment is still in force, Lagumdzija and Limov had also violated the Bosnian Constitution and a number of human rights granted by the state laws in accordance with the European standards.

The court also mentioned neglect of the authorities towards the families of the Algerian group.

Soon after her Boudellah Hadz was extradited to the US and sent to Guantanamo Bay, his daughter Sejma died of acute heart weakness.

Her family did not have money for the lifesaving heart treatment she needed, according to the statement.

The investigation of the Sarajevo Cantonal Court coincided with the decision of the US Supreme Court earlier this month to give Guantanamo detainees possibility to challenge their detention in federal courts.

The case, known as “Boumedien versus Bush,” in which the court granted Guantanamo detainees rights under the US constitution to challenge their status as “unlawful enemy combatants,” was initiated by Lakdar Boumedien of Bosnia’s Algerian group.