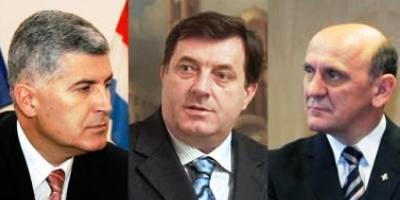 The Bosniak-American Advisory Council for Bosnia and Herzegovina (BAACBH) condemns any decision inflicted against the democratic principle of consolidation of the rule of law which protects multi-ethnicity and unity in Bosnia and Herzegovina (BiH). BAACBH strongly disagrees with agreements that challenge BiH’s sovereignty and equal rights for all of its citizens, regardless of ethnicity, religion, or language. On November 8, 2008, a meeting took place between party representatives Sulejman TihiÄ‡ (SDA), Dragan ÄŒoviÄ‡ (HDZ), and Milorad Dodik (SNSD) who unanimously agreed on a number of mandates concerning constitutional reform, property rights, and the population census. Although BAACBH supports all constructive dialogue, we do not agree with Mr. Dodik’s destructive remarks following the meeting. Mr.Dodik made a statement to the media about the Bosnian language, claiming that Bosniaks do not have a right to call their language Bosnian but should call it Bosniak, which goes against the current constitution labeling Bosnian as one of the official languages of BiH. In its annual report on Bosnia’s progress towards membership, the European Union (EU) identified ethnic division in BiH as a serious concern and obstacle. Mr. Dodik’s remarks are a testimony to the EU report’s warnings, and emphasize his dedication to strangling the country in hopes of independence for the Republika Srpska entity, which was founded on genocide and ethnic cleansing. In light of this situation, the differences between some of the Bosniak parties only contribute to the downward spiral of the political situation in BiH, and we would hope that the leaders of the parties realize that to stop the ethnic division that Mr. Dodik is tirelessly promoting, they must overcome their differences.
The decision to transfer property ownership rights from the federal to the entity level will further divide the country and consolidate ethno-territorial division, not to mention undermine BiH’s sovereignty and future stability. In terms of constitutional reform, the party representatives agreed that reforms should be formulated in a framework as amendments to the Dayton Peace Agreement. Although the Dayton Peace Agreement ended the aggression on BiH, it lacks the core principles of democratic governance needed for a stable Bosnia and Herzegovina. In fact, the Dayton Peace Agreement has institutionalized ethno-territorial divisions overshadowing minority rights and enabling certain nationalistic sentiments to prevail. The path towards EU and NATO membership requires BiH to have a constitutional reform based on civic engagement which will accentuate equal rights for all of its citizens. In order to guarantee this, there needs to be a full revision of the Dayton Peace Agreement. BAACBH, dedicated to promoting peace, economic development, and minority rights in Bosnia and Herzegovina and the Balkan region, disagrees with the agreement made by Mr. TihiÄ‡, Mr. ÄŒoviÄ‡ and Mr. Dodik. The agreement reflects and deepens ethnic divisions rather than unity.
BAACBH strongly encourages the international community to re-engage its efforts in Bosnia and Herzegovina before a decade of progress is reversed.