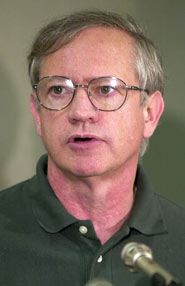 The Bosniak-American Advisory Council for Bosnia and Herzegovina (BAACBH) remembers the six-term Honorable Frank McCloskey, who passed away on November 2nd, 2003. Congressman McCloskey, a Democrat from Indiana first elected in 1983, was a determined advocate for peace and justice. He critiqued the Clinton Administration during the Bosnian War and expressed outrage over the barbaric treatment of innocent Bosnian, specifically Bosniak, people. He warned Congress of the emergence of genocide, that the Serb para-military leaders indeed committed. In 1994, a Republican opponent criticized McCloskey for being more concerned about Bosnia than his district, ignoring the fact that Congressman McCloskey embraced humanity and advocated to preserve justice in Bosnia and Herzegovina.

Congressman McCloskey did his utmost to preserve justice in Bosnia and Herzegovina. Melissa Merz, McCloskey’s press secretary and close friend remembers that “elections didn’t matter to Frank. What mattered was doing the right thing, speaking out when no one else would and no one was listening. Eventually, Frank kept speaking long enough and loudly enough, and the world realized that it could no longer ignore the gross injustice in Bosnia. That is Frank’s legacy. That he spoke out and stood up for the right thing when very, very few people did.”

Today, we are reminded of his strength and dedication for Bosnia and Bosnian people. We remain indebted to him for being our voice and for giving us the courage needed to begin anew after the genocide that traumatized our lives. For his endless support and dedication to peace and human rights in Bosnia and Herzegovina, BAACBH honors the remembrance of Congressman Frank McCloskey.