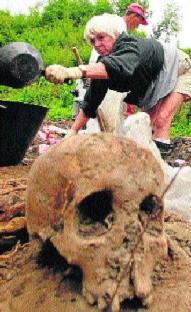 The State Prosecution files an indictment against a former member of the Second Special Police Squad, for genocide committed in Srebrenica.

The Prosecution of Bosnia and Herzegovina has filed, and the State Court has confirmed an indictment against Zeljko Ivanovic, known as Arkan, charging him with genocide committed in Srebrenica in July 1995.

Ivanovic is charged with having participated in the capture and shooting of more than 1,000 Srebrenica residents in the Agricultural Cooperative in Kravica village, Bratunac Municipality, on July 13, 1995. The State Prosecution contends that he was a member of the Second Special Police Squad with the Ministry of Internal Affairs, MUP, of Republika Srpska, RS, at that time.

The indictment charges him with having participated in a joint criminal enterprise with the aim of “exterminating a group of Bosniak people”, forcibly resettling, capturing and executing men and boys.

The indictment alleges that, on the part of the road leading from Bratunac to Konjevic polje, in Sandici, Ivanovic and other members of the police and the Republika Srpska Army, VRS, participated in securing passage on the road, as well as its closing and opening to traffic, thus participating in the “execution of a plan of forcible resettlement of women, children and the elderly belonging to the Bosniak population group”.

According to the indictment, Ivanovic participated in the capture of several thousand Bosniak men who were trying to escape from the protected zone of Srebrenica as they were afraid of being captured and executed by members of the MUP and VRS. After having been captured, the prisoners were searched and their money and other valuables were taken away from them. Then they were ordered to put away any food, clothes or other things they had in their bags.

The indictment charges Ivanovic with having participated in escorting a convoy of more than 1,000 detained Bosniaks from Sandici village to the warehouse of the Agricultural Cooperative in Kravica, knowing that they would be killed. After having detained them, Ivanovic and other members of the Second Squad formed “a semi circle” around the warehouse, and started shooting at the prisoners, who were detained in the warehouse.

The indictment states that Ivanovic and other members of the Second Squad left the semi-circle of people and went behind the warehouse, with the intention of preventing detainees from escaping from the building by jumping through the windows, which was the only possible way out for the prisoners.

During that time other members of the Second Squad continued shooting with machine guns and automatic weapons and throwing bombs in front of the warehouse, killing more than 1,000 detained men.

Ivanovic has been held in custody since the beginning of March this year. He was arrested in Mokro village, in Pale Municipality, on the basis of an international warrant.