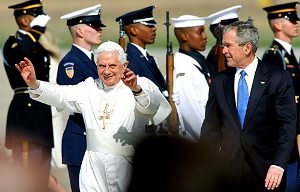 As one of 138 Islamic leaders and scholars from around the world who last October signed the first-of-its-kind â€œA Common Word Between Us and Youâ€ open letter intended to promote understanding between Muslims and Christians, I welcome Pope Benedict XVI on his first papal visit to the United States.

While that letter, which was well received by the pope and other world Christian leaders, recognizes the differences between our two faiths, it also states: â€œ[L]et our differences not cause hatred and strife between us. Let us vie with each other only in righteousness and good works. Let us respect each other, be fair, just and kind to (one) another and live in sincere peace, harmony and mutual goodwill.â€ (See: http://www.acommonword.com/)

It is this desire for harmony and goodwill between faiths that leads American Muslim leaders to welcome the pope and to meet with him during his visit to our nation.

Religious leaders have a great responsibility and opportunity to show the best of both our faith and of our nationâ€™s religious diversity during the popeâ€™s visit. We must demonstrate that our faith in God should be a source of peace and reconciliation, not violence or mutual mistrust.

American Muslims can also reiterate that they respect and love the revered figures of Christianity, including Jesus and his mother Mary.

As God states in the Quran, Islamâ€™s revealed text: â€œBehold! The angels said: â€˜O Mary! God gives you glad tidings of a Word from Him. His name will be Jesus Christ, the son of Mary, held in honor in this world and the Hereafter and in (the company of) those nearest to God.â€™â€ (The Holy Quran, 3:45)

The Quran also reaffirms Godâ€™s eternal message of spiritual unity when it states: â€œSay ye: â€˜We believe in God and the revelation given to us and to Abraham, Ismail, Isaac, Jacob, and the Tribes, and that given to Moses and Jesus, and that given to (all) Prophets from their Lord. We make no distinction between any of them, and it is unto Him that we surrender ourselves.â€™â€ (2:136)

The Prophet Muhammad said: â€œBoth in this world and in the Hereafter, I am the nearest of all people to Jesus, the son of Mary. The prophets are paternal brothers; their mothers are different, but their religion is one.â€

As Americans, we cherish diversity, not only in race and ethnicity, but also in faith. In that spirit, I see the popeâ€™s visit as an opportunity for him to learn more about America and its respect for religious diversity.

Unfortunately, some of the popeâ€™s past statements and actions have led to tensions between Muslims and Catholics. It is perhaps best not to dwell on these past events, but instead to use them as a springboard to help deepen interfaith dialogue based on mutual understanding and acceptance of differences.

The true test of productive interfaith dialogue comes when we build partnerships to take on the great challenges facing humanity today – injustice, inequality, war, poverty, illiteracy, disease, and hunger. To that end, we must quickly expand and strengthen the constructive conversation between faiths.

Two great faith communities, Islam and Christianity, together make up more than half of the worldâ€™s population. It is therefore imperative that Muslims and Christians use their faith to make a positive difference in their communities and the world.

By preaching – and practicing – the values of tolerance, love of oneâ€™s neighbor, justice, peace, and reconciliation, people of all faiths can help reverse the worldâ€™s disturbing descent into violence and division.

Today the world needs forward-looking political and religious leaders who focus more on the future than on the past. We need leaders who build on what we have in common, not on our differences.

It is our hope and expectation that Pope Benedict XVI is one of those who will help lead our world to a better future.( CAIR)