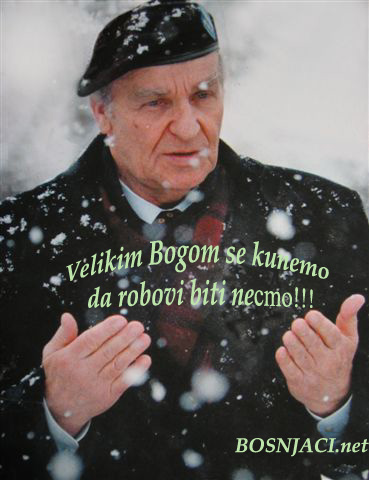 On the occasion of the fifth anniversary of the death of the late Bosnian President, Alija Izetbegovic, in Pristina has been organized a scientific conference on the topic â€œAlija Izetbegovic, Between East and Westâ€, in which various scholars tried to shed light into the unexplored part of Izetbegovicâ€™s figure, as one of the most respected leaders of Balkansâ€™.

The participants described the late President Izetbegovic at this conference as a charismatic leader, a devoted, wise, intelligent, highly respected and influential man in the world.

The representative of the Association for Culture, Education and Science (AKEA), Husamedin Abazi said on Saturday that Izetbegovic believed in the pure human nature and he never backed-off, not even in the most difficult moments.

On the other hand, a representative of the state Turkish International Cooperation and Development Agency (TÄ°KA) said Alija Izetbegovic was a great man who always turned his ideas into deeds.

Qemal Morina, Deputy Provost of the Faculty of Islamic Studies, said that as nations sharing the same religious identity, the Bosnian and Kosovar nations shared the same destiny.

Speaking about Izetbegovicâ€™s figure, Morina said he will always remain a highly respected symbol for all Balkan nations.

â€œAlija Izetbegovic will not remain only a symbol of the Bosnian nation, but also a symbol of all nations in the Balkansâ€™ who fought for their freedom and independenceâ€, said Morina.

The Grand Mufti of Novi Pazar, Muamer Zukurlic, said there are many wise people in the Balkansâ€™, but not all of them use this knowledge for the freedom of their homeland.

â€œAlija Izetbegovic was a man who devoted his bright knowledge to the freedomâ€, said Zukurlic.

The scientific conference â€œAlija Izetbegovic, Between East and Westâ€ was co-organized by AKEA and TÄ°KA.

â€œIslam had the greatest influence in the development of my personality. In my age of fifteen I neglected the Islam a little bit since I was reading various literatures, but in my age of seventeen I returned and embraced Islam. What pushed me back to Islam was the great hate for the communism and fascismâ€ Izetbegovic said amongst others in an interview recorded several years ago.

Alija Izetbegovic (8 August 1925 â€“ 19 October 2003) was a Bosnian activist, lawyer, author, philosopher and politician, who, in 1990, became the first president of Bosnia and Herzegovina. He enrolled in the Faculty of Agriculture, but later he changed his mind and switched to the legal school, becoming a lawyer and afterward obtaining a doctor degree in legal sciences.

Izetbegovic served in this role until 1996, when he became a member of the Presidency of Bosnia and Herzegovina, serving until 2000. He was also the author of several books, most notably â€œIslam Between East and Westâ€ and â€œThe Islamic Declarationâ€. The French daily â€œLe Mondeâ€ announced him the â€œMost Influential Man in the Worldâ€.