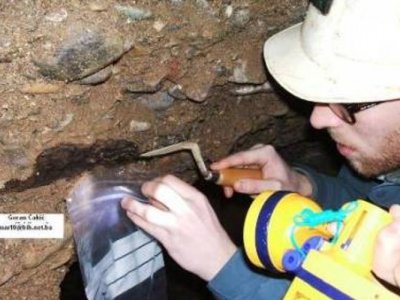 Amir Moustafa left Visoko today after six days of hands-in-the-ground research, gathering material for a cover story in the university historical newspaper he helped to found, Roots. In these six days he was everywhere, talking to experts and locals, shooting film of the pyramids and people on them, even finding two fossils during a day of volunteer digging on the Pyramid of the Moon. He returns to Cairo where he studies at the American University, majoring in political science with a minor in economics and environmental science.

On the evening before his departure, I talked with Amir in the hotel lobby where we both stay. He is engaging and exuberant and reminds me of my college days. Following is an excerpt from the nightâ€™s conversations.

What gave you the idea to do this story?
I proposed it for the front page [How did you hear about it?]. I heard about it on CNN a couple of months agoâ€¦ I donâ€™t remember who the correspondent was, but they basically came here and they filmed Semir, and they filmed other people around, and then I was interested, I was hooked â€“ pyramids in Bosnia, thatâ€™s an issue. I kept it in my head, I checked the website from time to time, just to see the progress, and then when we came up with the idea of making the newspaperâ€¦ when we came together to figure out what weâ€™d put on our front page â€“ itâ€™s really important, itâ€™s the first edition, people donâ€™t have to read the paper, but they will see the front page and whatâ€™s on the front page and the headline â€“ I said, â€œHow about Pyramids in Bosnia, exclamation mark, what do you think about that?â€ They said, â€œOh, very interesting, pyramids in what? No way!â€

I contacted the foundation through Miho, who directs the website, Bosnianpyramids.org. He wrote back and said that he forwarded my message to Semir, gave me the information I neededâ€¦ From then on, nobody came up with a better idea. I said, â€œFine, let me take the front page, I think I may be able to go, Iâ€™m just waiting for a reply.â€ Semir replied a week later, saying, â€œThe food, the accommodation, the local transportation is all on me.â€ I said, well, thatâ€™s a sign if ever, and thatâ€™s it.

Of course I got excellent, on-the-spot reporting, everyone else is reporting based on the information they can gather where they are, but this is way too important.

When Miho asked me to call Dr. Zahi Hawass, I said sure. Three weeks of fruitless callingâ€¦ The numberâ€™s either busy, or it rings and no one answers. One time a secretary answers, sheâ€™s yelling at someone else or whateverâ€¦ it turns out it wasnâ€™t even the right number and thereâ€™s only one number.

Miraculously, two days before I leave, I call and the secretary picks up. â€œHi, Iâ€™m from the American University in Cairo, people in Bosnia want to know, as well as I do for my report, what Zahi thinks.â€ She says, â€œOkay, call tomorrow morning.â€ Tomorrow morning: â€œOh, he has meetings, meetings, meetingsâ€¦â€ I thought, thatâ€™s probably it, Iâ€™m going to go without the interview. Then around 4 or 5 I call and he answers, he says, â€œAmir, hurry up, Iâ€™m busy!â€

â€œWhat do you think about the pyramids in Bosnia? Iâ€™m going.â€

â€œYouâ€™re going to Bosnia because of the pyramids?â€ I said yeah. â€œOh no, no, there are no pyramids there, only a bunch of rocks, and Iâ€™ll send you my official statement.â€

I asked, â€œAre you going there yourself?â€

He said, â€œNo, but I will send someone over there, an official.â€

Did you ask him about the Egyptian delegation that was here?

I didnâ€™t knowâ€¦ But it seems like, because heâ€™s sending an official, he doesnâ€™t recognize them, or he would have taken itâ€¦ Lamia El Hadidy is not part of the SCA, the Supreme Council of Antiquities, which is like the Jedi school, the authority for archaeology, so the authority from the SCA is supposed to come, and thatâ€™s final for him.

Whatâ€™s been your impression of the pyramids?

Thatâ€™s an interesting question, one Iâ€™ve heard two times before on two different interviews. The answer is, well, you have two viewpoints, one, [some] geologists say itâ€™s completely natural, the other were the locals and some archaeologists who say, no itâ€™s not natural, they are man-made. I say you canâ€™t rule out that there might be man-made structures within the vicinity of the pyramids.

How was digging yesterday?

Well, I found two fossils [of leaves.] Iâ€™m very proud of myself. And then a group of university students from the University of Sarajevo, they came and they found three. But they found them where I was digging, they asked, â€œWhere did you find the fossils?â€ â€œRight here.â€ They said, â€œCome with us, weâ€™re going to dig.â€

And what they did, instead of digging vertically, destroying the fossils, they dug horizontally, using their hands.

How is the story taking shape?

[I feel] connected with the people. And you know this thing is really helping them out. You know one viewpoint, you know the other. Youâ€™re leaning towards one, maybe towards the other. You want to do the right thing.

Iâ€™m going to let it rest in my head, but so far Iâ€™m thinking about writing about the effects of the site on the town, and how the village is viewing this hope â€“ I use the word hope because thatâ€™s what rings in my head. www.bosnian-pyramid.net